There’s something refreshing about a celebrity taking an unpopular stand and sticking by it.

It’s why even those who vehemently disagreed with actor Seth Rogen’s recent statements might have silently cheered his stance. No backing down. Rogen said so himself during his chat with podcaster Marc Maron about the state of Israel.

Rogen, starring in the upcoming HBO Max comedy “An American Pickle,” explored his unease with Israel during a complicated exchange.

Maron and Rogen, both Jewish, shared their views on a number of culturally sensitive issues before the subject of Israel’s existence come up.

To me it just seems an antiquated thought process. If it is for religious reasons, I don’t agree with it, because I think religion is silly. If it is for truly the preservation of Jewish people, it makes no sense, because again, you don’t keep something you’re trying to preserve all in one place — especially when that place is proven to be pretty volatile, you know? ‘I’m trying to keep all these things safe, I’m gonna put them in my blender and hope that that’s the best place… that’ll do it.’ It doesn’t make sense to me. And I also think that as a Jewish person I was fed a huge amount of lies about Israel my entire life! They never tell you that — oh by the way, there were people there. They make it seem like it was just like sitting there, like the f***ing door’s open!…They forget to include the fact to every young Jewish person.

Maron: I get frightened to talk about it.

The actor then vowed to do something many of his peers refuse to do. Stand by his comments.

Rogen sounded a different note following the podcast’s release. He received both praise and condemnation for his comments on social media, hardly surprising given the tenor of the times.

I feel like @Sethrogen‘s comments are made from a position of really, really great privilege – and ignorance – if he can’t understand why Israel makes sense to millions of Jews around the world. I just hope he appreciates it.https://t.co/JdXfFTGOSR

Consider this exchange with a Twitter follower who wasn’t pleased with the comic actor’s view of Israel.

That was really disappointing. @Sethrogen needs to have conversations with Jewish leaders. His comments were hurtful, unfair and disappointing. It’s okay to level criticism at Israel, we all do, but he disparaged Israeli’s as a group. That’s unacceptable. 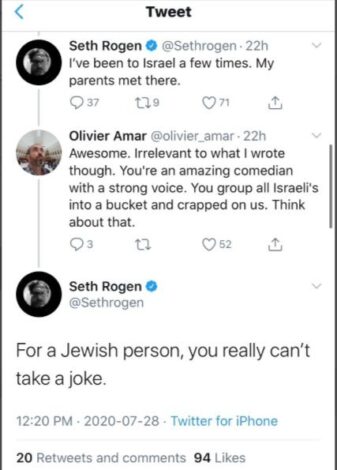 Rogen clearly wanted to be taken seriously with his comments, but when pressed on them he defaulted to, “hey, it’s just a joke.”

It’s worth noting that the person who reached out to Rogen on social media wasn’t mad at the actor. No, he saved his venom for the “trolls” who invaded their social media exchange.

So today, I tried to open up a conversation with @Sethrogen over his podcast interview and he was gracious enough to answer. Then the trolls on both sides of the issue came out and showed why the world is such a mess. Sorry about that Seth, it’s a shame it got taken over.