Don Coscarelli’s “Phantasm” exploits the imagery of a mortuary (and the process of embalming) to unsettling effect. Roger Corman’s “Premature Burial” (1962) and George Sluzier’s still-terrific “The Vanishing” (1988) also evoke the sensation of being trapped in a wooden box, forever doomed to rot beneath the soil.

may be the definitive work on being buried alive. If horror films suggest the fear of death, then this one concentrates on that idea and never flinches.

Bill Pullman stars as Dennis Alan, an American anthropologist who explores Haiti in search of a drug that places people in a zombified state. Craven’s film is inspired by the non-fiction book by Wade Davis, who uncovered a voodoo powder that could make those who ingested it appear clinically dead. Craven takes this chilling premise as far as it could go.
Pullman’s lead performance takes some getting used to, though it’s not entirely his fault. Coming right off of his hilarious film debut in “Ruthless People” (1986) and “Spaceballs” (1987), it’s a surprise to see him in this.

Pullman isn’t playing the great white savior. He’s more of a film noir gumshoe-type than a symbol of righteousness. The character is an opportunist, a hired company man and a capable fool.

At times, you wonder if Craven will attempt to match the go-for-broke surrealism and hallucinatory qualities of Ken Russell’s “Altered States.” Each offers an American explorer who unwisely ingests a mind and body altering solution. “The Serpent and the Rainbow” offers a more straightforward narrative, yet Craven breaks up the sequences of discovery and rich atmosphere with his trademark nightmare sequences. He doesn’t disappoint. 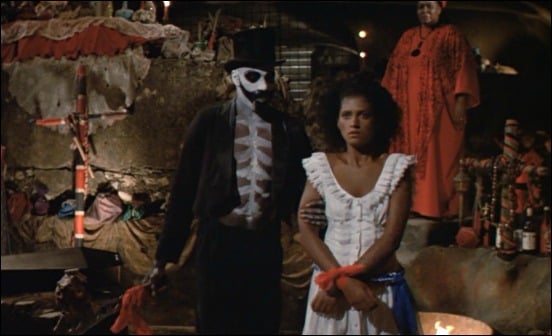 Note the scene where a shrouded woman creeps ever so slowly over to Pullman. It isn’t the way she’s moving, nor how we can’t see her face. It’s the way she’s breathing. It sounds like someone without teeth…or any flesh on their face. The nightmares and the sequence involving a main character being buried alive, are terrifying.

There’s a well-directed dinner party sequence that is, unfortunately, when the film gets campy. Most of “The Serpent and the Rainbow” is adult minded and smart enough to draw grownups and not just subscribers to Fangoria. However, once its established that Mokae’s villain has Freddy Krueger-like abilities of possession, as well as soul retrieval and nightmare invasion, the credibility of this “true story” goes out the window. That said, the film never ceases to entertain or display top-notch craftsmanship.

The same goes for the ending, which starts at over the top and then goes well beyond that. It concludes in a crazy, silly, impressive FX show, somehow fitting for a film so intense and based in extremes.

There are well-staged sequences of street violence, political activism and day-to-day life in Haiti that suggest Craven had grown as a filmmaker. These scenes wind up more background color than anything emerging sharply as social commentary. It’s still refreshing to see Craven so far out of his comfort zone. 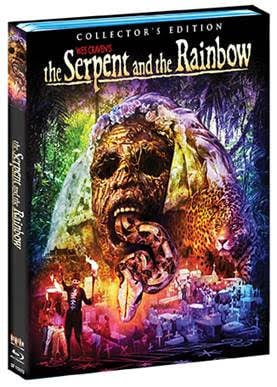 Considering his two prior works (“A Nightmare on Elm St” and “Deadly Friend”) were both suburbia based, Craven’s aim to suggest a John Boorman-like blend of ecological adventure with mystical horror is fascinating and almost entirely successful.

The Scream Factory Blu-ray release is full of extras and top-notch restoration. This is the sort of top-tier treatment of a horror classic that fans of Craven’s film deserve (and Scream Factory devotees have come to expect).

The new making-of documentary is thorough and lively. It includes Director of Photography John Lindley, Pullman (who is heard but never seen) and Davis’ interview via Skype. The behind the scenes details are colorful and fascinating. Davis is especially forthcoming about the film’s treatment of voodoo as a religion. He’s also outspoken about the film’s assets and flaws.

by Pullman and moderated by Rob Galluzzo (from Icons of Fright), is excellent. Their discussion is so engaging and covers so many topics related to the film, it doesn’t matter that they rarely talk about specific scenes. Galluzzo does ask Pullman about his sex scene with Tyson, though.

There are also trailers and a photo gallery. Included is the odd TV spot I recall from childhood, in which a scene involving a pool of blood was shown on television with a green filter. Whereas the televised ad shows some hesitancy in showing something truly horrific, Craven’s film, on the other hand, never does.