His spy thriller “Hapgood” is one of the finest of the late 20th century, as is “Arcadia.” He co-wrote the screenplay for “Brazil,” adapted “The Russia House,” “Empire of the Sun” and “Billy Bathgate” for the big screen and won a Best Original Screenplay Oscar for authoring “Shakespeare in Love.”

His lone credit as a film director is his adaptation of his 1966 play “Rosencrantz & Guildenstern Are Dead,” a little-seen gem celebrating its 25th anniversary starting Jan. 12 on Blu-ray and DVD. Gary Oldman and Tim Roth play Rosencrantz and Guildenstern, respectively. The two nitwits whose friendship with Hamlet leads to their demise deserves a long, overdue cult following.

William Shakespeare’s “Hamlet” gave us Rosencrantz and Guildenstern, Hamlet’s friends who unwisely conspired against him. The two enjoyed a few chummy moments with Hamlet before finding themselves headed for death. Hamlet realized his so-called pals had been chosen by the King to spy on him. 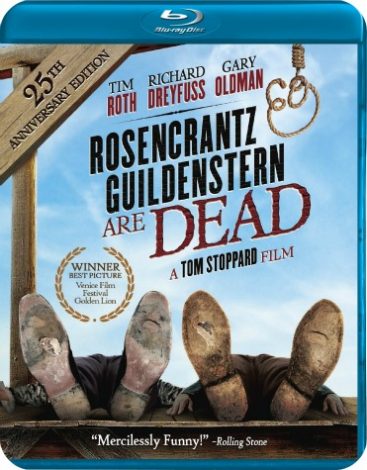 In Stoppard’s vision, Rosencrantz and Guildenstern seem vaguely aware that they’re walking plot devices. There’s always been a tendency to portray them as either somewhat or outright foolish. In Stoppard’s film, the two are an intellectual notch below Vladimir and Estragon, the protagonists of “Waiting For Godot,” an obvious inspiration.

Rosencrantz and Guildenstern share hardly a moment where they plot or contemplate anything beyond their own existence. Even when they were advised by the King to spy on Hamlet, they never seem very canny or capable.

These two transient, existentialist goofballs play out their roles in “Hamlet” and are incapable of avoiding the vortex of doom they created for themselves.

Oldman and Roth, such edgy, intense actors elsewhere, are utterly charming. From their introductory entrance on horseback, where they ponder how their flip of a coin could always land on “heads,” they nail Stoppard’s playfully existentialist banter. They make a great comic duo.

This is a post-Sid Vicious Oldman, in the film he did right before his amazing work in “State of Grace.” Roth was a few years away from “Reservoir Dogs,” which turned the prolific character actor into a steady figure in ’90s independent films.

It’s hard to imagine the two in a film like this today. Watching them infuse such affection into these adorable fools is a joy.  At the time of the film’s release, “Rosencrantz and Guildenstern’s” biggest star was Richard Dreyfuss. The role of the Player King was reportedly scheduled for Sean Connery, who dropped out. Dreyfuss proved perfect for the part. His demonstrative comic instincts and rapid fire patter make him a better fit than Connery.

Stoppard’s direction lacks any style, which is just fine for the material. The dialog is everything here, and since the actors give it such vigorous workout, it’s as funny and thought provoking as it needs to be. Even with Iain Glen making a spry Hamlet, the film belongs to its three leads, who give Stoppard and their audience a hearty go of the intellectual and nutty material.

Revisiting the film inevitably makes me think back to my remarkable introduction to it: I saw it at the long-gone Keystone art house movie theater, which was located on the bottom floor of the Balley’s Hotel in Reno, Nevada.

My dear Grandma Flo took my brother Marty and I to the theater and allowed us to pick a movie. Our choices were “Goodfellas,” which was rated R (at the time, I was 14 years old, while my brother was 11) and the Scandinavian film, “Pathfinder.”

The only other option, “Rosencrantz and Guildenstern Are Dead,” was rated PG and had Dreyfuss in the cast. That was our choice.

The Keystone was our first experience in an art house cinema, and it was an eye-opening introduction. The seats were plush couches, everything was clean and shiny, the snack bar had a wide selection of concessions – which were awfully expensive. The film began and, despite it being so strange, dialog-driven and heady stuff for kids raised on Steven Spielberg films, we were both enchanted.