We can’t give away that exact scene in “Edge of Winter.” Suffice to say that moment starts the film’s slow, desperate decline.

Joel Kinnaman isn’t to blame. The actor’s small screen work continues to outstrip his U.S. movie roles. He still gives the main character in “Winter” a credibility other stars might of missed. He can’t do it all, though. He needs a second hat as a screenwriter to rescue this unsatisfying indie.

Kinnaman is Elliot, a blue collar type getting to spend some time with his teenage sons at long last. He’s divorced, and his ex’s new beau represents everything he’s not.

Elliot is unemployed and lives in a depressing shack. His self-loathing is palpable.

But he’s still a daddy. That means he can show the boys a thing or two about shooting guns, sipping beer and being a man.

Only he can’t prevent the boys from being boys. 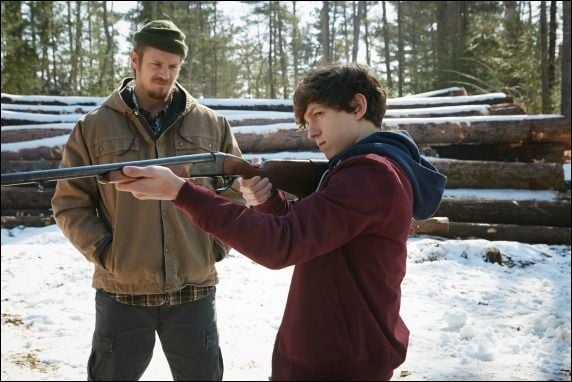 A driving mishap leaves the trio alone in the wintry woods. No food. No supplies. Just men versus nature. It’s Elliot’s nature, though, that’s put to the ultimate test.

“Winter,” originally dubbed “Backcountry,” begins with serious promise. The family bond between Elliot and his sons (future web slinger Tom Holland and Percy Hynes White) is wholly realistic. They’re teens, through and through, but they want to believe in their father. They need it. Still.

Dad is just as eager to make a positive impression. Only his parental tool kit is missing a few key items.

FAST FACT: Joel Kinnaman spent a year at a Texas high school because his parents wanted him to take a break from the crowd he was running with back in his native Sweden.

The film’s shift from dysfunctional drama to thriller isn’t without its appeal. First time director Rob Connolly maximizes the chilly backdrop, plunging us into the forest without compromise.

Any parent can relate to Elliot’s plight. He loves his children dearly but fears he doesn’t have what it takes to make their lives complete. He’s still a man, though, and he trusts his instincts that he bring out a maturity in them his ex-wife simply can’t.

That tension sells the film’s first half. It’s when the narrative pushes for more that “Winter” buckles. The third act, while professionally staged, simply lacks credibility and surprise.

HiT or Miss: “Edge of Winter” reminds us how good Joel Kinnaman can be with the right role, but “The Killing” standout can’t survive the film’s misguided plot twist.

Not every remake deserves to be greeted with a shoulder shrug or eye roll.

For every “Ghostbusters” there’s a “Pete’s Dragon,” a project given fresh energy and a dash of organic CGI.

The new “Dragon” falls short of instant classic status. It’s still a warm, wonderful tale told at a speed fans of the 1977 original will admire.

It eschews fast cuts, hyperactive action and other modern tics to quietly tell its story. Said story is very different than the source material. Sticking to the first film’s pacing might be its biggest selling point.

The charming Oakes Fegley is Pete, a youngster orphaned in the film’s opening moments. Yes, it’s another Disney movie where the parents meet their maker, but it’s handled as delicately as possible.

Pete isn’t alone, though. He befriends a shy dragon he calls Elliott, and together they survive in the lonely wilderness.

They’ve managed to avoid humanity for some time. But a logging company is pushing into the forest, disturbing their bond (and threatening yet another environmental screed).

A kindly park ranger (Bryce Dallas Howard) eventually takes Pete in. She’s closely attuned to the forest, so she can’t imagine how the lad survived on his own for so long.

Grace’s father has a hunch, though.

Robert Redford deploys weapons-grade gravitas as an old timer who insists he saw Elliott years ago in the forest. So when Pete’s story starts to unfold, Redford’s role in the story escalates.

CGI brings Elliott to life, but he isn’t like most dragons. He’s as furry as a feline, and his face has a gentle quality that plays down his lizard-like predecessors.

The animation here is rock solid, and that matters. Elliott is alternately graceful and clumsy, which makes him surprisingly real. It helps that whenever he interacts with humans, particularly Pete, the effects are flawless.

Howard invests her character with a raw, maternal touch. She gets an assist from the film’s unabashedly beautiful glow. From the cozy cinematography to the homespun soundtrack, “Pete’s Dragon ” is always inviting.

The story’s gentle confidence, though, isn’t always earned. The characters, including those played by Wes Bentley and Karl Urban, lack the depth of the best kiddie movies. Still, the heart strings get plucked in a satisfying manner more than once. You’ll get those throat lumps on cue, and you won’t feel embarrassed about it.

Young Fegley is excellent as Pete, a feral child with just enough domesticity still lurking within. It’s easy to look past his performance, but had they miscast Pete this yarn would unravel.

“Pete’s Dragon” cribs DNA from both “E.T” and “King Kong,” but it does so without compromising its artistic integrity.

The film’s pacing is so very 20th century, and that’s a good thing. The story’s conflicts similarly take time to develop. When they do, they never overwhelm the youthful target audience.

All we want is to see Pete and Elliott together again, the oddest of couples who can teach us all about loyalty and friendship.

HiT or Miss: Will “Pete’s Dragon” become a new family classic? All we know now is it’s joyous treat for old and young alike.