Could an all-Asian cast bring the rom-com back from the grave? It won’t be for lack of trying.

Or maybe a truck full of the latter, to be precise?

Even Thurston Howell III might blanche at the extravagance on display. The beauty of the film is that during the story’s opulent peak we can’t take our eyes off the love birds.

Rachel (Constance Wu) and Nick (Henry Golding) are in love, the kind that’s sweet but never shmoopy. They jet to Singapore to celebrate the wedding of Nick’s good chum, and that’s when their romance hits a big ol’ speed bump.

It turns out Nick is rich. How rich? He describes his family’s as “comfortable,” a tell-tale sign they make Scrooge McDuck look impoverished. He’s a real estate heir who’s been hiding his family’s extravagance for some time. The jig is up, but it’s only part of the problem.

Can Rachel fit in with this uber-rich clan? Will the family matriarch, a steely Michelle Yeoh, accept her as one of their own? Or has Rachel become too Americanized for her own good?

“Crazy Rich Asians” trots out everything we’ve come to expect in rom-coms, and more. We get the sassy best friends (including professional scene stealer Awkwafina), the swishingly gay compatriot and the third act twist threatening true love.

Need more? How about infidelity, outrageous parties and leads that rival the genre’s ultimate duo in both beauty and charm?

Yes, Wu and Golding are excellent here, keeping up with the story’s frenzied pace while never pushing us away. It’s impossible not to cheer them on, which is exactly what a romantic comedy demands.

Yeoh holds the film together all the same. She’s the arch villain, the person who could single-handedly bring this couple down. A simple eyebrow lift is enough to scare you silly. She finds the right tone between motherly pride and fierce protector. She believes in her wealthy eco-system and the culture that makes it possible.

There’s a moment mid-film where the opulence meter hits red, and that’s saying something for a film that would be shredded for privilege had the characters been caucasian. The lushness isn’t the wow factor. Our leads lock eyes, swap glances and swoon all over again.

It’s a magical moment capturing two stars with vibrant chemistry and a director who understands what matters more in any given sequence. Yes Jon M. Chu, who previously delivered the DOA “Jem and the Holograms,” uncorked this intoxicating romp.

The film repeatedly reverts to formula even in the waning moments, but “Asians” closes on a beautiful, and wildly appropriate note.

There’s something else lurking within the story, based on the bestseller of the same name by Kevin Kwan. It’s a culture clash where (spoiler alert) the West emerges as the victor.

Our heroine doesn’t back down during her fight with Yeoh’s formidable Mama Bear. She takes pride in her humble roots, the dignity her single mother displayed and won’t give up on her ideals.

Maybe all the rom-com genre needed was a bit of old fashioned American values to win us back.

HiT or Miss: “Crazy Rich Asians” is a delight, a romantic comedy brimming with lush visuals and a couple worthy of your cheers.

“Mile 22” is a well cast, expertly crafted mess. And that’s being kind.

Director Peter Berg has few rivals when it comes to crafting “you are there” action sequennces. You feel every gut punch when the director is at work, with bullets practically whistling past your head.

That mentality is in full effect for “Mile 22,” almost to nauseating effect. You’ll pine for the subtlety of your average “John Wick” movie when this one’s done.

Mark Wahlberg stars as Jimmy Silva, a CIA agent with a chip on his shoulder. Let’s call it a boulder. He’s short-tempered, cruel and unwilling to cut his colleagues a molecule of slack.

“Mile 22” opens with a fascinating home invasion, one choreographed with great care by Berg. The set piece is confusing, no doubt, but it plays out with orginality and buckets of tension.

That dizzying sense only intensifies from there.

We soon learn Silva, along with generic characters played by Ronda Rousey and “The Walking Dead’s” Lauren Cohan are tasked with protecting a whistleblower with information about deadly nuclear material.

Their assignment? Bring the mysterious “package” – an electric Iko Awais (“The Raid”) – 22 miles to a safe location where he can spill his secrets (and save millions in the process).

That simple setup is cloaked in Silva’s double, triple and quadruple speak, a clunky Russian subplot and internecine squabbling. All of which makes for one head-scratching experience.

Enter Berg, who dials up the action and frantic editing to a degree like we haven’t seen before. And with very good reason.

Wahlberg’s Silva is constantly snapping a rubber band against his wrist to maintain focus. We could use something to numb the pain of his performance. Wahlberg is trying. Oh, is he trying. But it’s his biggest mistake since thinking killer winds would be a great film co-star.

Rousey looks up for the task, but her role is so slight only her Big Moment registers. And why hire an MMA superstar and give her so little room to roam?

Lauren Cohen, on the other hand, fills the tough as nails female op to a T. She’s instantly credible, and the one moment she lets down her guard you can’t buy it for a minute.

“Mile 22” traps other actors in its gritty web, including the great John Malkovich. He’s forced to bark generic Action Movie dialogue, the kind so far beneath him he should be delivering his lines from a hidden basement. That said, Malkovich rocks an impressive toupee. 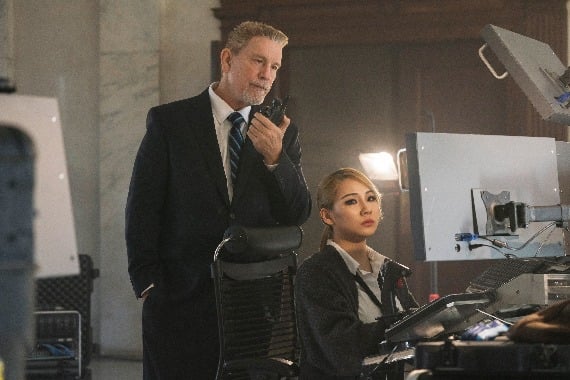 Berg’s obsession with modern day heroes is commendable. His previous films, from “Lone Survivor” to “Patriot’s Day,” payed tribute to their heroism and selfless gestures. You can sense something similar stirring in “Mile 22.”

Sometimes our heroes aren’t too pleasant. In fact, they’re downright nasty. Heck, it’s in the job description. The film is just too frenetic, and violent, for those themes to come together in a satisfying way.

Berg still can’t let this clunker go without a few scenes worthy of his resume. One fight sequence, where the main character is partially restrained but still able to defend himself, could have audiences yelling, “bravissimo!”

By the third reel those same audience members will sit slumped in their chairs, dreaming of a quiet bath or cup of steaming hot chamomile tea.

HiT or Miss: “Mile 22” strains to be different than your average action flick. It succeeds. It’s much worse.