Did you know Alexander Skarsgård of “True Blood” fame is playing the lead in “The Legend of Tarzan?” 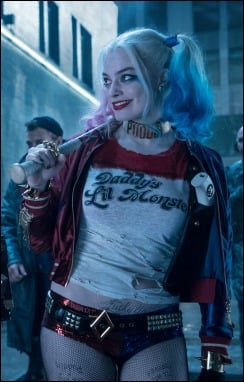 Okay, most of you probably heard that. Did you also know Margot Robbie is playing his love interest, Jane?

The “Suicide Squad” star hasn’t been highlighted in the film’s marketing push as expected. She’s not even seen in the movie’s poster. That’s curious.

One of the hottest actresses in Hollywood, in arguably one of the steamiest roles ever created, has gone missing.

Edgar Rice Burroughs was a Victorian Era writer who wrote pulp fiction, including the “Barsoom” series. That contains the recognizable “John Carter of Mars” story line, made into a memorable flop four years ago.

The author also is responsible for the durable Tarzan saga.

Tarzan was a big deal when it was first published in 1912. The novel represented Burroughs’ commentary on the sexually repressive mores of the time.

The Victorian man was repressed, dishonest, manipulative, passive-aggressive and worst of all — political.

Burroughs was deeply concerned about the loss of “manliness” that only a connection to nature could bring. Think courage, unfettered sexual desire, strength, honesty (especially in regard to our animal natures) and command.

Tarzan is nothing if not the epitome of the Alpha Male. What could be simpler in sexual dynamics than, “Me Tarzan, you Jane!”

Our post-postmodern men’s groups have left dancing around the campfire and giving bull ape roars from the days of Sam Keen and Robert Bly. Now, we embrace more socially sophisticated rituals like the Mankind Project’s “Weekend Warrior” where groups of men, and I quote, “Accept responsibility as man among men!”

When I hear “warrior” bandied about, it’s hard not to think of that brilliant line from Jonathan Ames’ HBO series “Bored to Death” and his dilettante detective Jonathan, “Can you please look at my penis and tell me I’m an adult male?”

Who confirms “manhood” on a male member of our society?

Groups like the Mankind project believe it’s only other men who can confirm this status. In the Victorian Era, it was society (a society of men) that determined your value as a man. Burroughs, though, had a different idea altogether — it was nature.

Only the experience of nature (other) could confirm true Alpha Male status. Burroughs was writing at a time when there was sexual repression and disinformation. Yet Tarzan is not a runaway “Id” having sex with anyone and everyone like David Duchovny’s character in “Californication.”

No Burroughs’ Tarzan, while sexually unrestrained, remains faithful to Jane.

“However, this untamed energy does not extend to Tarzan’s sexual nature, at least in Burroughs’ version of the saga. Tarzan’s faithfulness to Jane is legendary.

Tarzan, for all his “Lord of the Jungle” status, is still ultimately a product of his times — a true Victorian man and upholder of those ideals.

Which brings up back to “The Legend of Tarzan” and the question of who is the target of the movie’s marketing campaign.

If you show a man fighting with apes, villagers and Victorian men, it’s possible the marketing is targeting men, even with the absence of Robbie’s Jane. It’s also conceivable women are the target, given the frequent images of a shirtless Skarsgård.

In this retelling of the Tarzan saga, who bestows the mantle of “man” onto Tarzan? Is it Jane, nature, or Victorian Era men? Maybe all three by the end of the movie?

All we know is that Tarzan is a complicated character, one who exemplifies the duality of men in modernity, post modernity, and post-postmodernity.

Like Ames’ character, it seems some men need somebody to look at their penis and confirm than they are indeed men.

What’s fascinating about our era is that as we argue about bathroom access and who Kaitlyn Jenner really is, there’s Tarzan trying to make it simple again for all of us.

Maybe it is that simple… you are who you say you are.