Immersive theater’s potential is inspiring a new generation of talent.

The company’s latest production, “One Exit,” is a prime example. Inspired by Sartre’s “No Exit” and “Dante’s Inferno,” “No Exit” expands immersive theater’s scope with a healing touch. To learn more about the show, HiT reached out to Julia Henning, Founding Member & Creative Director for The Halogen Company, prior to “One Exit’s” July 11-14 run.

HiT: What was your first experience with immersive theater, and did you embrace the format right away … or did it take time to appreciate what it offers?

Julia Henning: My first experience with immersive theater divinely fell into my lap at the start of 2017. I, like many in this community, had caught word of New York’s “Sleep No More,” and after not being able to cash in on my ticket due to an untimely sickness, I lamented to my friend in New York how badly I had the sense I was meant to be in proximity to this “immersive theater.”

Granted, I really had no idea what that entailed, but I always trust a gut instinct. 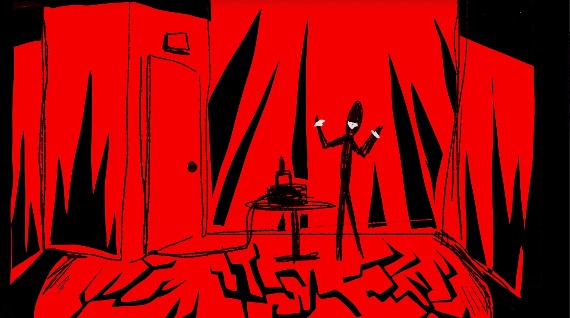 In the same conversation, my New York comrade rather casually mentioned to me that her partner at the time was in fact family friends with a couple who happened to own and run one of Los Angeles’ well known immersive theater companies, The Speakeasy Society. Days before the auditions for their well known Johnny Cycle ended, I managed to land a slot. And the rest is history.

Having been cast in “Johnny: The Living” as a character with a one on one guest experience, as well as being cast as the all around female understudy, encouraged me to dive in head first in the immersive format. I embraced it right away.

At the time, there weren’t any workshops, warm ups, or guides to doing immersive theater. (At least, none that I was aware of.) However, it didn’t take me long to understand that guest management, reading a room, knowledge of an environment, and improvisation were the key elements in the sink or swim nature of immersive theater. I was hooked.

HiT: How has immersive theater grown in recent years, and how are actors reacting to both its potential and challenges?

Henning: In recent years, immersive theater is on the rise as a new form of entertainment. Guests are inching away from screens, the fourth wall, and predetermined endings and leaning more into the no distraction present moment and all encompassing surroundings of an immersive experience.

Many companies ranging from corporate to entertainment are turning to immersive theater to provide an experience that can promote, highlight, or simply treat their markets. As a younger member of the community and in integrating with several companies over the years, I’ve adapted to many different styles of immersive theater.

RELATED: Follow These Rules to Get the Most Out of Immersive Theater

As an an actor and creator, the potential of immersive theater exists in the basic elements of the human condition; interaction, connection, escapism, and the child-like permission to play. These elements encourage those on the working side of the format to create worlds that inspire, provoke, and nurture its guest.

The potential to truly create and live within an imagined world, outside of cinema, is now possible.

The challenges in this of course come with scale. The ability to provide an experience in a 360-degree environment where guests are encouraged to at times, choose their next adventure or heavily participate in their current one, adds pressure to the actor and creator to think of every detail of every situation that could possibly happen, and to hopefully instill something meaningful into each moment.

Safety, guest management, respect to the space, and respect for every individual boundary and expectation makes providing a unique but structured experience challenging.

HiT: Are there misperceptions about immersive theater you’d like to help dispel?

Henning: Immersive theater is not easy. Creators and actors are challenged to create, maintain, and tend to a fictional world. The actors are forced to manage technical elements, the crew is forced to make adjustments on the spot, and the creators, at times, are forced to step in as members of the world.

The team cannot control what you see at every moment, as cinema so skillfully masters. In immersive theater, attention must be paid to every aspect of the experience. I have found and I take time in teaching and encouraging, that actors must learn how to care for people, being an actor myself. There must be some level of the human condition that is addressed and skillfully mastered, as an actor may run into a very personal, uncontrollable and raw experience with another.

The Halogen Company’s One Exit, a new immersive theater with an escape room installment https://t.co/4LSnc0NTiT pic.twitter.com/A2sIlYQYtK

In traditional theater, this type of spontaneous interaction isn’t possible but immersive offers the next step in this type of involvement.

I want to dispel the notion that immersive theater is all spectacle, it’s about connection. It’s looking someone in the eyes and saying “you’re safe with me in this moment and we can move forward.”

HiT: “One Exit” tackles serious themes, the kind that may push audience members up against their comfort zones. Can you share your creative approach to that style of storytelling?

Henning: As a psychology and philosophy major, I often ruminate on the human experience. Being a human fascinates me. My company exists to mine the frequently forgotten existential gems found in every day experiences that many often overlook or in most cases, entirely ignore.

In “One Exit,” my goal was to provide a meaningful human experience. Having guests use their personal information to navigate and escape the experience was dealt with in a sensitive fashion by way of actor and guest relationship and the script itself.

Company writer, Daniel Manning and I worked hard on developing a script that felt delicate and authentic to the types of pains, suffering, and struggles we experience in this world. As a creator, it was important for me to work with the actors one-on-one first and to establish a foundation of emotional intensity they were able to work within.

My psychology education played a role in preparing the team for a variety of reactions. For the artists to feel the depth of their scenes in the same way the guests might, the actors were given the opportunity to extend past their comfort zones in a very fast-paced setting and were offered a chance at expanding in process, which large scale art can so easily negate.

I am in the business of creating something interesting. Subtly infusing moments for guests to intrinsically reflect, express themselves, and witness various moments of connection, is an artistic win.

For me, it’s about creating intimacy with topics that can be feel polarizing. Treating the concept of intimacy with care and respect is the utmost priceless resource I utilize when creating.

HiT: “One Exit” offers a laudable commitment to helping those struggling with suicidal thoughts. Can you briefly share your thoughts on artists connecting their work to causes that overlap their art?

Henning: I lost my best friend months before I ever decided to become an immersive creator. As this show deals with traumatic and sudden deaths, it is our duty as a company to reach out and raise awareness for this issue. “Deaths of despair.” related to drugs, alcohol, or suicide — claimed the lives of 36,000 American Millennial in 2017 alone. Drug overdoses are the most common cause of death.

According to Blue Cross Blue Shield, there has been a 47 percent increase in major depression since 2013. However, one in five don’t seek treatment — likely because they can’t afford it. If we intend to showcase human life, I intend to support it.

In a world where hustle and reward are celebrated, process often gets left in the dust. I find it is critical to support and shine a light on any individual, community, corporation or idea that promotes a process for the good of others. The pressing experience of loss and duty became very apparent to me.

Because the immersive community houses a range of individuals, we feel any material that touches on these very real aspects of life needs to be brought to the forefront. Theater and entertainment have the ability to lift us from the less than glamorous truths of our world. But the stories we have permission to play with are the stories of others who live the less than glamorous side of the truth.

Yes, our play deals with death and suicide, but what we want to remind people that it is not something to be glamorized. Inherently, art will always be somewhat self-indulgent. Attaching our production to a charitable cause adds a certain sense of sacred appreciation for the other that I cherish very deeply.

HiT: Where do you see immersive theater going in 2020 and beyond? Have we just scratched the proverbial surface of the stories to be told in this fashion?

Immersive theater is encouraging us to focus, listen, and respect each other again. Having the resources to truly build and fill out an invented world enables creators to go beyond for the stories that are begging to come to life. As the commercial side of immersive theater continues to iron itself out in regards to public awareness and consumption, the art form is taking definite strides in delivering innovative and engaging stories to both die hard fans and the masses.

HiT: For those who don’t live near theaters featuring immersive theater, is there another way to get a taste of what it’s like (without hitting Kayak.com for a flight …)

Henning: Many immersive companies provide online interactions that correlate to their company mission or their actual productions. The characters exist outside of a physical setting and are meant to accomplish tasks that guests can oversee, comment on, and in some cases, control.

Immersive event centered websites keep you up to date on events and such companies and enable out of range guests the chance to connect with other immersive fans. Immersive forces us to question the world around us.

The space we inherit is curated- it is the playful imposition of a fantasy realty. Immersion theater is the epitome of “pay attention, what you do matters here”. We must ask what the guidelines, the boundaries, and the rules are of the world we are inhabiting.

For immersive seekers, think of the places where this type of attention is present. In museums, subway stations, public parks, amusement parks…it is anywhere that has a socially agreed upon set of rules and where the standards are heightened.

Sure, these public attractions might not offer the carefully constructed narrative of a specific story, but these places promote the immersive structure. Virtual reality games and experiences are another option for individuals wanting to immerse in a different world. As the player, you must interact with your environment, make choices that affect the outcome, and engage with your senses in many ways immersive theater does.

It can be difficult to find immersive theater, as it is still developing, but I encourage all patrons and curious guests to simply look around wherever they go. Immersive theater is simply taking elements of what you’re seeing in everyday life and condensing it to a specified location with a set of rules.

We have the ability to immerse ourselves with our own stories anywhere we go, and to me, that’s enough to get up and keep creating.