If men were benign there would be no need for superheroes.

Life was simpler in 1939 when Bob Kane and Bill Finger created Batman. Batman’s motivation, like that of so many comic book good guys, was to right a wrong. In Bruce Wayne’s case, it was the murder of his parents. His mission expanded to serving the cause of justice, which has always been a conservative idea.

We are a nation of laws. Creators may not have consciously realized their characters had a conservative agenda, and in many cases, subsequent writers have expanded that agenda to embrace more liberal concerns such as intolerance and inequality.

That is not to say conservatives are not concerned about such things.  As always, it’s a matter of degree.

When John Wagner created Judge Dredd, he made him an American. In 1977 Britain seemed relatively law-abiding compared to the American Wild West. Judge Dredd addressed conservative frustration with a society and legal system that seemed to grant endless exemptions, caveats and mitigating circumstances to horrendous acts.

One need only look at the description of crazed Jihadist Major Nidal Hassan’s deadly attack as “workplace violence” to appreciate the malicious nature of political correctness.  Judge Dredd cuts through all that by being judge, jury and executioner.

“I am the Law,” he declares, much like John Wayne before him.

Today political correctness runs rampant throughout the comic industry as it does in every branch of entertainment.

Denny O’Neil, who reinvented Batman for the modern world, got the ball rolling during the 1970s with his famous Green Lantern/Green Arrow run. It had the embattled superheroes addressing drug addiction, corporate pollution and the Trial of the Chicago Seven.

Today it’s a big deal when a superhero comes out of the closet, as Alan Scott, the original Green Lantern, has done. Wikipedia has a list of well over a hundred gay, bi, or lesbian superheroes.

O’Neill told me, “I sometimes wonder if sixties liberals didn’t create the atmosphere for today’s extreme politics and name calling.”

DC has introduced Simon Baz, a Muslim Green Lantern. Marvel has recast Ms. Marvel as the daughter of a loving but strict Muslim family.

When Steve Rude and I created Nexus we had one imperative: to entertain. 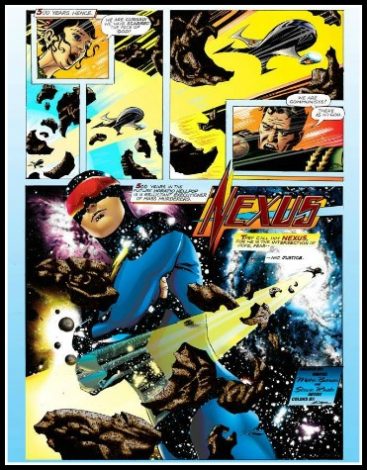 We are not political creatures although we are both conservative by nature. We have no message we’re trying to spread.

Our protagonist is conservative by nature. When we created Nexus in the ’80s, the Soviets were the bad guys. Five hundred years in the future the Soviet Empire had metastasized into a gulag in space.

When the Soviet Union collapsed in 1991, my friends kidded me about my skills as an oracle.

Are not Futurists supposed to predict the future? Well, no. They are to imagine the future, but let’s not lose the thread here.

The immutability of human nature is a bedrock of conservative belief. You can legislate until you’re blue in the face. You can impose draconian measures. But nothing will change human nature. The Soviet Union may be gone, but what’s taken its place? Same old, same old. They just changed the name back to Russia.

Nexus suffers dreams of mass murderers. When he wakes he must assassinate the guilty parties or the dreams will return.

Nexus believes in the death penalty. He also believes in judging people on the basis of their actions and not on their states of mind which has led to much soul searching, especially in the case of “The Old General.”

RELATED: Will Fans Get Trapped in Spidey’s Synergy Web?

Throughout the ’80s I snatched stories from the headlines. Our condemnation of Islamic fundamentalism could not be plainer in the thinly-disguised Cousin Lathe/Elvonic story-lines. We did a two-part God-Con series which declared Christianity good. I wonder at my hubris in writing that. I wish I could take it back but I can’t. It’s out there.

In our current story-line, we touch again on our underlying theme, that central-planning leads to totalitarianism, most notably in Gnosis’ back-story. Who is Gnosis? He is herald to the world eater Gourmando. Who is Gourmando? Gourmando is our version of Galactus, and Gnosis is Gourmando’s Silver Surfer.

As always, Nexus fights for the dignity of the individual.

Mike Baron is an author and veteran comic book writer behind titles like “Nexus” and “The Badger.” You can visit Mike’s Facebook writer page or check out his projects at Amazon.com.