You’d think freedom of speech would be one topic liberals and conservatives could agree on in these fractured times.

Adam Carolla and Dennis Prager are making a documentary about the attacks on free speeches on college campuses nationwide. The high-profile cases revealing these assaults are too numerous to count at this point.

Google “berkeley” “protests” and “fire” for a primer.

So the podcast king and syndicated talker are hitting the road for “No Safe Spaces.” They’ll engage with today’s college students while underlining how academia is crushing free expression. All the while a camera crew will document their trek.

A new IndieGogo campaign is looking to raise $500,000 to fund the film. An investor has pledged to match that figure with an equal amount to complete the project.

If children are the future … these college students are the leaders of tomorrow. And their inability to accept differing arguments is frightening. And that’s not counting those drooling to commit violence to ensure other views aren’t heard.

That’s not how several mainstream news outlets are reporting on “No Safe Spaces.” Take Vulture.com, which starts in a dismissive fashion:

The widely documented protests against conservative and right-leaning guest speakers at universities and the escalating violence revolving around the free speech debate on campus is getting rehashed in yet another hot take by podcast personality and comedian Adam Carolla.

From there, the short article takes the side of California State University, Northridge which alleged a potential Carolla/Prager event was shut down last year for “logistical reasons.”

So, in case the name of the documentary or the Indiegogo campaign video mocking elite universities wasn’t proof enough, these guys aren’t exactly coming to the phenomena from a place without bias.

And would Vulture cry foul if it was Michael Moore, the king of biased documentaries, attempting a similar project?

That was far more kind than the increasingly liberal A.V. Club’s “hot take” on “No Safe Spaces.” Here’s the snarky headline:

From there the condescension drips off the computer screen.

Adam Carolla has joined the ranks of the numerous comedians—mostly male, mostly white—defending America’s college campuses from the hated “snowflakes” that flurry all over them these days, ruining higher education with their constant demands for their personhood to be acknowledged or treated with respect.

The site calls the coloring book giveaway “transphobic” and compares Carolla and Prager to “drunk, angry uncles.” Here’s guessing Prager would incinerate that reporter in a debate on any 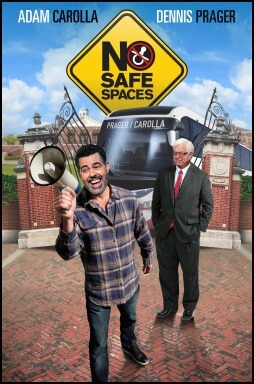 When you don’t have the facts on your side, though, name-calling is the next best thing.

And then there’s Mary Sue. The site melted down over an attempt to save free speech for a new generation.

Comedians Adam Carolla and Dennis Prager have launched an Indiegogo to fund their “No Safe Spaces” tour, which is just as tone-deaf and unnecessary as its name would suggest.

And Mary Sue says “No Safe Spaces” is unnecessary?

Too many liberals see any attack on conservatives as justified in today’s toxic culture. And, if it means trashing the First Amendment in the process, so be it.

Is it too cynical to suggest some liberals will try to stop the film from reaching audiences?

Mary Sue isn’t done yet, though.

Carolla then criticizes student protests against certain speakers as an assault on “free speech,” as if he doesn’t realize that protests are in themselves a form of free speech. (It’s almost like he’s ill-informed!)

Speaking of ill-informed, is the writer wholly unaware of the violence marking so many attacks on free speech? The destruction? The fires? The injured folk?

Prager on a Plane

It’s easy to single out reporters so enmeshed in their ideology they can’t rally around free speech issues. It’s important all the same.

They aren’t alone, though.

When was the last time Stephen Colbert mocked campus snowflakes who cower at views they don’t already hold? Has “Saturday Night Live” done any skits lampooning those who target free expression? How many politicians on the Left have rallied to defend free speech?

Sen. Bernie Sanders did … but so far he’s the exception that proves the rule.

Sounds like Carolla and Prager could have a sequel on their hands if they’re game.