Podcast king Adam Carolla interviewed Carlton Cuse of “Colony” fame last week. Before their chat, Carolla told his podcast mates about a little TV viewing he did over the Christmas break.

A dash of nostalgia compelled him to watch an episode of the ’80s smash “The A Team.” Carolla quickly regretted it. The episode in question featured pop star Boy George squeezed into a hopelessly silly story.

Competition, he said, transformed the TV of old into the glorious content we see today. In the 1980s the cable revolution was just beginning. The “new” channels like CNN didn’t directly compete with the broadcast networks’ prime time schedules. Today, an NBC or ABC must counter the content generated from not just a crush of cable channels but Hulu, Netflix and Amazon Prime.

“It’s incredible how good TV is [today],” he said. And he credited that competition for making it happen.

A similar trend happened with ballpark food, he noted.

Years ago, a trip to see the L.A. Dodgers meant choking down nachos drowning in that “fake orange chemical.” Now, as ballparks across the country embrace specialty stands and other higher-end concessions, food quality has spiked.

“[Growing up] we had the Carnation frozen block of chocolate with the wooden spoon … it was the highlight of the game. You’d never eat that anymore,” he said. 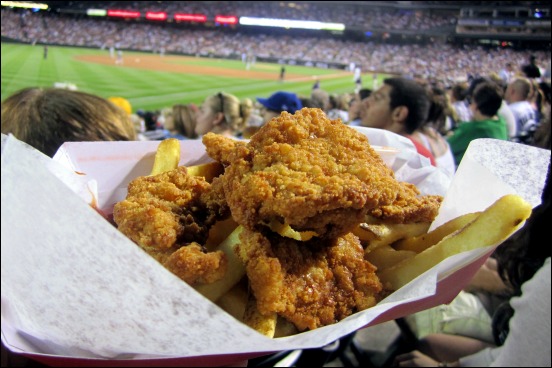 “Before they had all the eateries … did you not eat? You ate! Whatever the [expletive] they were selling. Guess what’s not selling so well anymore?” he asked. “Why? Well, we have a choice. I bet stadium food had to up their game quite a bit.”

“In the world of TV and/or arenas and stadiums it works the exact same way, in government and society [too] which is -- competition. Lookout world, the sky’s the limit,” he said.

Remember the “space race” between the U.S. and the Soviet Union in the 1960s? That fiery competition helped the U.S. reach the moon first. If we didn’t have the Russians trying to beat us to space we’d still be trying to reach the stars, Carolla and his co-podcaster “Bald” Bryan Bishop agreed.