Johnny Carson could make a comic’s career by summoning him or her to his “Tonight Show” couch.

David Letterman lacked that late night power, but his quirky spirit made him an icon to budding comics.

It explains why Maya Rudolph, two years removed from her days on “Saturday Night Live,” couldn’t believe her luck when Letterman’s team invited her to appear on CBS’s “The Late Show” in 2009.

Except it didn’t work out as she hoped.

Letterman apparently mispronounced Rudolph’s name at the start of that segment, and Rudolph hasn’t forgotten the slight.

“I did not have a good time … He said my name wrong, and I just sat there, like, ‘I grew up my whole life in love with you. And now my heart is broken. And I’m sitting here embarrassed and humiliated.’ I didn’t know how to handle it.”

It’s easy to relate to her situation. Many people have been in the spotlight only to have someone butcher their name. It’s unfortunate.

Plus, Letterman’s production team should have ensured he knew how to pronounce her name before she came on stage. Except Letterman caught his error mid-interview and apologized.

“I’m sorry that I mispronounced your name,” he said. “I’m just a boob, there’s no excuse for it, and from the bottom of my heart, I sincerely apologize.”

Except she’s still telling the story. And the media can’t get enough of it. Look as this screen shot of press reports on the matter. 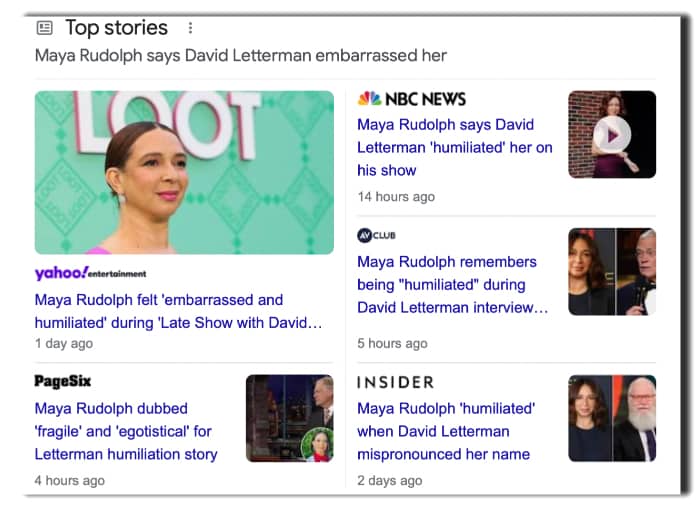 The Hollywood Reporter rode to Rudolph’s rescue in its bold, fearless reporting on the tragedy.

The Hollywood Reporter has reached out to a representative for Letterman for additional comment.

What on earth is Letterman supposed to say … now? He apologized in the moment, which is exactly what was required. Must he do a public apology, a Struggle Session for daring to inadvertently diminish a guest?

The segment happened 13 years ago.

This is where we are as a culture. Old slights, both real and potentially imagined, must be revived so we can punish the “guilty” parties. And celebrities adore this trend, allowing them to bring up past injustices to settle scores while snagging sweet media attention.

Of course, some of these recollections can be horrifying and deserving of fresh attention. Think of all the starlets assaulted by Harvey Weinstein as a prime example. And some of Bill Murray’s alleged behaviors, like jokingly pulling down on Geena Davis’s spaghetti strap dress during a TV chat with Arsenio Hall three decades ago, might deserve fresh scrutiny.

What Rudolph endured was an imperfect dream come to life.

Rudolph went on to enjoy a busy career in Hollywood following this tragic event, careening from TV projects to major film roles. She remains steadily employed and her talents are routinely welcomed by her peers.

Why is she a victim? And why are we placing victimhood at the top of the cultural food chain?

There’s no better example of this than Meghan Markle, the B-list star who is literal royalty. She routinely complains about alleged racism in the royal family, growing up as an only child (not accurate) and, more recently, that she was treated like eye candy while playing the eye-candy role on TV’s “Deal or No Deal.”

Rudolph is simply playing her role in the Victimhood Olympics. And, with the press’s help, she may come away with the Gold.