In addition to its Best Picture Oscar, more than $100 million box office gross and permanent stamp on the zeitgeist, “Lambs” also elevated another film with which it shares a close kinship.

The 1986 film marks the first cinematic depiction of Dr. Hannibal “The Cannibal” Lechter (billed in the film, for some reason, as “Lecktor”). It proved a box office flop.

Upon its VHS release, the film found an audience for its association with Mann, whose “Miami Vice” was the hottest, most influential cop drama of its day. The show’s slick, neon-rich colors, MTV-ready music and exhilarating action proved a winning formula.

William Petersen (coming off his striking debut in William Friedkin’s “To Live and Die in L.A.”) stars as Will Graham, an FBI profiler living in self-imposed exile with his family. 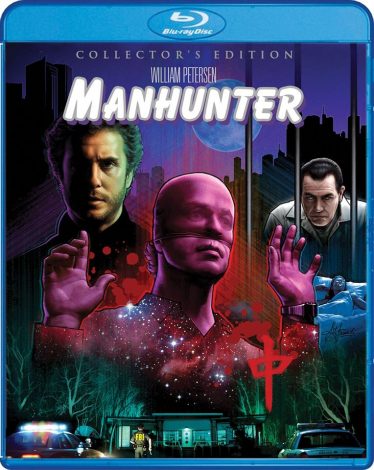 Graham’s near-supernatural ability to solve cases by thinking like his prey has made him a huge commodity to the bureau. It’s also left him a haunted, tortured man.

Graham’s career of chasing monsters, and his harrowing former relationship with the imprisoned Lektor (Brian Cox), left him a survivor in search of his former innocence.

When we meet Graham, arguably the “manhunter” of the title, his existence is one of an endless vacation, living in a splendid, secluded paradise with his wife (Kim Greist) and son. Yet, Graham is also a visibly haunted man, and his presence in a beachfront home reveals a person more adrift like Crusoe than a content, happy individual.

The lingering past of his profession, which he’s unfortunately very good at, inspires his superior, Jack Crawford (Denis Farina) to seek him out for another job. A serial killer named Francis “The Tooth Fairy” Dolarhyde (Tom Noonan) has murdered an entire family.

Only Graham can stop him.

Mann’s “Manhunter” is all about space, the architecture of comfort and the feel of unease one can experience while in their own home. In Mann’s “Heat,” Robert De Niro’s bank robber has a lush beach front home that glows in a cool blue, overlooking splendid waters and evoking a hidden, personal Eden.

Graham’s home in “Manhunter” is, likewise, solitude that feels more like solitary confinement. These are men who cannot be contained or domesticated. As noted in Glenn Frey’s popular “You Belong to the City” off the “Miami Vice” soundtrack, these are night creatures. They are both a “man of the street.”

The film’s scariest scene is the pre-title sequence, in which we see a first person POV tracking shot of a flashlight, guiding the path of an unseen visitor up a darkened stairs and into a bedroom. We’re in the home of the Leeds, who are fast asleep.

We learn later that we’re looking through the eyes of the sadistic Dolarhyde and witnessing the last sane moment in Mrs. Leeds’ life. Because Mann cuts away just before the violence takes place, he leaves it in our minds to suggest what comes next.

Later, we see the aftermath. Vast piles of dried blood are everywhere in the room. The power of suggestion, through color and mood, is prevalent in Mann’s film, whether to give off a cool mood or instill dread.

Petersen is perfection as Graham, allowing the audience to see the pain he carries but keeping us at a distance from the impenetrable brilliance of his deductive reasoning. If Sherlock Holmes were psychologically wounded from years of crime solving, he’s probably look a lot like Graham.

Also terrific is the late Farina, Joan Allen (whose character is the film’s most endearing and vulnerable), and Kim Greist. There’s no movie star hierarchy or baggage in the cast. Everyone is an ideal pick for their roles.

Noonan, playing Dolarhyde, is so scary, it’s no wonder he became typecast as a go-to villain.

FAST FACT: Michael Mann got his start on TV, writing episodes of “Police Story” and “Starsky and Hutch.”

Dante Spinotti’s cinematography makes the film both dreamlike and terrifyingly vivid. Note the way, after a character comes crashing through a window in slow motion, the camera seems to shudder upon impact. Also, due to the blend of lighting, compositional spacing and subtle art direction, every scene (particularly those in the Leeds’ home) offers an immersive, you-are-there perspective.

The use of color allows a rich tone for each setting. Whether we’re in Lecktor’s cell, Dolarhyde’s rundown home or outside during a night time sting operation, the exterior and interiors are grounded in reality but also mythical and larger than life.

As in Mann’s “Heat,” “The Keep” and “Blackhat,” there is an artful precision in the way Mann shapes a contemporary thriller into a masculine fantasy.

It’s worth mentioning that “Manhunter” was originally titled “Red Dragon” but, due to the box office failure of “Year of the Dragon” the year before, had its title changed. Yet, in 2002, the film was remade by Brett Ratner and featured Sir Anthony Hopkins, reprising his definitive role of Lechter. It followed Ridley Scott’s 2001 enormously successful and controversial “Hannibal.”

Intriguingly, both “Manhunter” and “Red Dragon” were shot by Spinotti, feature many of the same scenes and identical dialog. Mann’s film is the undisputed classic but, to cut “Red Dragon” a break, it’s a solid adaptation and Ratner’s best film by far.

As opposed to Mann’s film, “Red Dragon” has an unhurried pace, a cleaner narrative, an impressive, pyrotechnics-heavy finale and a sensational opening scene. The cast is top notch – particularly good is Philip Seymour Hoffman, playing the role of an ill-fated tabloid reporter.

The late, great Hoffman is a vast improvement over Stephen Lang’s foppish turn in “Manhunter.” Yet, while Edward Norton’s underrated Graham is good, he lacks the intensity and inner anguish visible of Petersen’s performance.

“Red Dragon” is a solid companion piece to “Manhunter,” as is the third season of the superb television series, “Hannibal.” That 2015 season faithfully re-told the events of “Red Dragon” and added gothic resonance to the show’s best season yet.

As of this writing, the series is finished, though Harris’ story and characters are so sensational and unceasingly frightening, it undoubtedly will be recreated again. Yet, it’s hard to imagine any incarnation ever matching the power, elegance and poetry of Mann’s film.

The multitude of interviews and behind the scenes featurettes on the new two-disc Scream Factory release is, in a word, sensational.

The interviews with Petersen, Allen, Cox and Noonan are all candid and illuminating. There’s also individual interviews with the same four cast members from a prior 2000 DVD release, which results in some of the same anecdotes but also covers ample ground.

Initially, Mann’s director’s commentary seems underwhelming. Yet, the soft spoken filmmaker has a great deal to offer, and his insights grow stronger over the running time (his thoughts on the Lecktor scenes are especially interesting). Musicians who performed the film’s score and Spinotti are interviewed, and there’s also a theatrical trailer and photo gallery.

The Blu-ray case comes with a reversible slip case that features the film’s original poster art and a striking new piece that expresses the film’s horror and wonder.

I love the original poster, which resembles a Mr. Mister album cover but the new art commissioned for this release is yet another masterpiece.

Scream Factory has been knocking out definitive masterpieces, whether it’s the reversible poster art or the overall disc. “Manhunter [Collector’s Edition] [Blu-ray]

” is one of their best yet, a definitive and authoritative release of an essential Mann film.