Denzel Washington doesn’t so much as cross a toe over said line in “The Magnificent Seven.” Co-star Chris Pratt? Let’s just say he leaps over it like Nia Ali.

Yes, the score is majestic, the settings as lush as any western deserves. And the story doesn’t stray too far from the sturdy template. Seven ornery types do battle with a land baron stealing turf from hard-working folk.

Yet at times the remake feels more like an earnest homage than an oater itself.

A small town is being bullied by Bartholomew Bogue (Peter Sarsgaard). The cad wants to buy up the locals’ land at less than market prices.

“It won’t sweeten. It’ll only sour,” he says of his “deal.” It’s a great line, capturing his villainy in one smarmy stroke.

His henchman kill a few townsfolk to show they mean business. One new widow (Haley Bennett) decides they must take a final stand or risk losing everything they’ve worked so hard to achieve.

That leads her to Chisolm (Washington), a gunslinger who might convince Bogue to terrorize some other town. But Chisolm will need help – namely six other warriors who bring their own unique skills to the table.

It’s another, “let’s assemble the team” montage with little imagination behind it. What motivates these men to risk their lives for a near-suicide mission? It’s not always clear, and that’s a big problem.

So is the calcified banter between them.

It takes a special skill to slip into another time period, and not only look like you belong but sound like it, too. Pratt can’t make that happen, at least not consistently so.

Washington does. He’s so effortless in the process you never doubt he’s a sharp shooter ready to save the day. The fact that he’s black rarely registers. He’s a bad ass ready to do some good. Period.

Ethnicity is mostly an afterthought with this diverse “Seven.” Pratt’s character teases the group’s Hispanic warrior (Manual Garcia-Rulfo), but it never transforms into a lecture.

The rest of the cast fares better. Vincent D’Onofrio gets a gaggle of weird lines as the beaded Jack Horne. It’s not a fully developed character, but the actor knows how to sell the concept behind it.

Ethan Hawke gets the best back story. He’s a legend, a sniper with a cool name (Goodnight Robicheaux) and a glorious past. Only it’s not clear if he can live up to it.

Of course, this is a remake of a remake –  Akira Kurosawa’s “Seven Samurai” established the blueprint long ago. So it’s hard to get too worked up over the whole “desecrating a classic” argument.

Westerns can be remade, given enough gumption, smarts and perspective. Consider excellent recent examples like “3:10 to Yuma” and “True Grit.”

Those films could exist nicely on their own. This “Magnificent” retelling needs the original as a marker.

Sarsgaard isn’t the first actor you might think of as a genre villain. He’s terrific all the same, but the screenplay doesn’t take advantage of him. After his memorable entrance he logs very little screen time until the finale.

That third act lives up to the press clippings, at least from an action vantage point. It goes on, and on, and its filled with cool gun slinging and endless heroism.

Director Antoine Fuqua clearly loves the western genre. He gives us dramatic entrances, framing that captures classic genre moments and all the slick gun tricks you can squeeze into one movie.

Some of those trademark elements come vividly to life.

“I seek righteousness, as we all should, but I’ll take revenge,” Bennett’s character tells her guns for hire. It’s another killer line, but their numbers dwindle as the story marches on.

We don’t see much of her fellow citizens, which robs the movie of its own righteous appeal. Why not reveal them tending to their land, commiserating about the trials and tribulations of life back then? 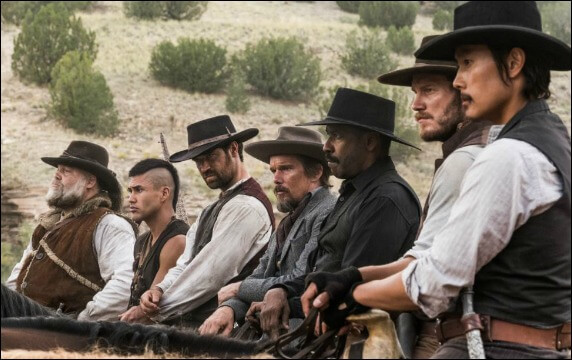 The western embraces a strong moral fiber. Good versus evil. It’s why we love the genre all these years later.

That’s on fitful display here. We don’t need a speech about why people risk their lives to do the right thing. A richer story, with more potent subplots would have done the trick.

“The Magnificent Seven” shows its affection for the western in every scene. It’s merely blockbuster window dressing. The hallmarks of a great western story are sadly left in the dust.

HiT or Miss:”The Magnificent Seven” looks great and brings the bullets in a protracted finale. But it’s no instant classic despite Denzel Washington’s bravura turn.