Author Larry Correia read the cultural tea leaves before some of his peers.

The mind behind the “Monster Hunter” series saw how publishers put increasing pressure on writers to toe a progressive line. Those who didn’t paid the price.

Now, Cancel Culture is in full swing, but Correia’s fan base helps protect him from the woke scolds.

HiT talked to Correia about the novel, the perils of modern publishing and how independent thinkers can still thrive today. 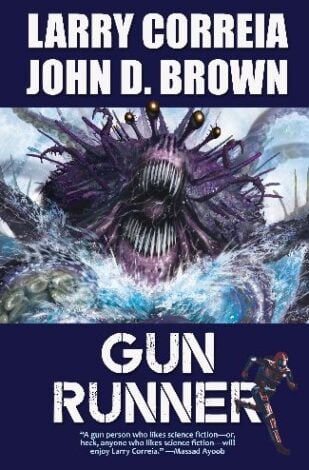 HiT: There’s something about anti-heroes that readers can’t resist … talk about balancing the many sides of Jackson Rook in “Gun Runner.”

Larry Correia: Jackson was basically a child soldier on the losing side in the revolution on his home world. When we meet him a few years later he’s a cynical, jaded criminal working on the outskirts of society, but when he sees people suffering the same kind of tyranny that he grew up with, he tries to do the right thing.

Despite having a hard past Jackson is still a good man with a sense of honor. I love writing heroes who are heroic and bad guys who are really bad, but they’re all still human with relatable motivations. Jackson’s a vet who can’t stand seeing the little guys get pushed around.

HiT: Talk about collaboration with John D. Brown … what was the process like, and how did having a writing partner influence your voice?

Correia: John is a really talented author who comes from a thriller background, and he’s a joy to work with. How this collaboration came about is kind of unique.

The two of us were asked to give a presentation at a writing symposium about how to create a plot. We had two hours in front of an audience of about 200 aspiring writers to outline an entire book from scratch.

if the mob comes for you, don’t back down, don’t apologize if you’ve done nothing wrong, and don’t forsake your principles.

And to make it fun, we called upon my son (who was 10 years old at the time) to give us the basic story ideas that we had to incorporate.

We asked him, “what’s cool?” And being a 10-year-old boy, he started giving us things like giant robots and space pirates. So we ran with it.

Two hours of brainstorming in front of a live audience later, we had a rough outline and a cast of characters, and John and I looked at each other and went “Wow. That’s actually pretty good. We should write this.”

HiT: Right-of-center artists differ in how to incorporate their philosophies into their art? Some wear it on their sleeve, others avoid it entirely … but it might peek out on a subconscious level. What’s your approach here, and has it evolved over time?

Correia: I’m an entertainer first and foremost. My job is to give my readers a fun story. I can’t stand heavy-handed message fiction that beats readers over the head about how they should think.

But at the same time I love incorporating themes and philosophies into my work, only that stuff is secondary to the story. If I do a good job the reader never feels lectured at. The themes are just organic to the world. I once heard Jim Butcher say you should never preach harder than you can entertain, and that is great advice.

That said, there are some aspects of an author’s personality that are going to manifest in our work whether we realize it or not. I got a review for “Gun Runner” from this book review place that I know hates my guts for political reasons, but they were fair, and still gave it a good review.

However, they still felt the need to warn their readers something about how a common theme in Larry Correia’s work is that the rugged individual is better at solving problems that the government or big corporations and how some readers might find this triggering.

I just laughed at that. Guilty as charged.

HiT: “Gun Runner” feels like it could translate smoothly to the small or big screen … do you ever write with that in mind at all … or does it evolve organically based on the narratives you enjoy creating?

Correia: I’m often told that I write “cinematically”. I don’t do that with movies in mind, that’s just my style. It’s probably because I’m a fan of big action sequences and describing striking visuals. I would love to see some of my books turned into movies or TV shows, and I’ve optioned some properties, but none of them have gone into production yet.

HiT: Jackson Rook sounds like the kind of rascal who could power any number of stories … are you looking at more adventures with him, or is it too soon to say?

Correia: It’ll depend on how well the book does. We set a bunch of hooks for potential future stories in this universe, and I had a lot of fun working with John so I’d love to write more . My challenge is that I’ve got several other popular series that I write, and I have to keep getting those books out fast enough to keep the fans happy.

Don’t get me wrong, that’s a great problem for a writer to have, but it is still a logistical challenge. On the bright side I’ve averaged two books a year for the last 12 years. Plus, because I keep switching back and forth between worlds and genres I never get bored or stuck in any one of them.

HiT: The culture wars have never been hotter, and right-of-center artists are under obvious, overt attack. How are your processing this situation, and what advice do you have for fellow artists who fear cultural blowback?

Correia: I started trying to sound the alarm on the dangers of Cancel Culture early in my career (so of course they immediately tried to cancel me!). Publishing was ahead of most industries with just how lopsided and politically biased it was, but the rest of America is catching up with us now.

Their message was clear, if you were Other Than Left, you had to keep your head down and your mouth shut or they’d sabotage your career.

RELATED: Here’s the Word That Made This Famous Author Flee His Publishing Deal

There weren’t very many fiction writers who were openly defiant about our politics then, but there are a lot more now. That’s due to the proliferation of indie books allowing creators to bypass the traditional gatekeepers of Manhattan publishing, and the fact that writers like me are still making a good living despite the woke mob’s best attempts to silence us.

They’ve tried to boycott me, got me kicked out of various events, blackballed from some industry things, and written a bunch of newspaper articles about how I’m the worst person ever, but despite their best efforts I’m still selling books.

The best advice I can give to other artists is that if the mob comes for you, don’t back down, don’t apologize if you’ve done nothing wrong, and don’t forsake your principles. Giving in to bullies just makes them stronger. For every customer their slander has cost me I’ve probably gained two who are sick of the mob’s nonsense.

HiT: What’s next for you … new novels? Sequels? Spreading out to different media platforms, perhaps?

Correia: I’ve got a lot of irons in the fire. I’m currently working on the next “Monster Hunter” novel which will be out in August. That’s my most popular series.

Immediately after that I’ve got another collaboration with a horror author named Steve Diamond that’s a sort of World War One on the eastern front setting in a world with dark fairy tale magic.

Then I’ll be working on the next book in my epic fantasy “Saga of the Forgotten Warrior” series and another Grimnoir trilogy. As for other media, I’m actually working on launching a writing advice podcast right now.

Sadly, most writing advice podcasts have become more about satisfying the arbitrary demands of Social Justice Warriors (who don’t buy books anyway) than they are about how to make a living as a professional working author, and I want to try and combat that.

Yesterday some nobody, wannabe writer, social justice twit released a hit piece “expose” about how posters on Baen’s Bar were fomenting insurrection or some such nonsense. It was the usual bull*** hit piece (the sad part is, by saying the usual, half the country immediately knows exactly what I’m talking about). It was lots of pearl clutching over regular people not toeing their arbitrary political lines, misquotes, errors, quotes taken out of context, and some flat out lies.

However, this was clearly part of a coordinated attack in order to materially harm our business, because immediately after the hit piece was released complaints were filed with the various internet companies Baen uses for services to pressure them into kicking us off the internet. This hit piece was presented as “evidence”. Without going into details the companies then contacted Baen about these “serious allegations” so last night Baen temporarily took down the Bar forum to protect the rest of the company from being deplatformed.