Artist Doug TenNapel knew he needed a plan B after a dispiriting meeting with Human Resources.

TenNapel, the mind behind “Ghostopolis,” “Bad Island” and “Tommysaurus Rex,” recalls being asked to explain a photograph on his social media account.

“I was seen as hostile and overly masculine for holding a BB gun on Facebook,” TenNapel says. “In order to protect my career, I knew I needed to supplement my studio work with more independent work.”

So he turned to crowdfunding, where he found quick and sustained success. 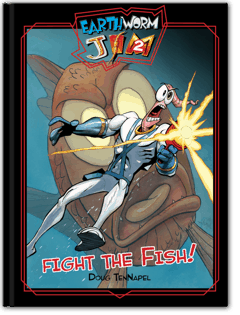 And he’s not alone.

A group of like-minded artists – think pro-faith, right-leaning souls or just those exhausted by the industry’s woke agenda – went solo on their own terms.

To hear them tell it, they had no other choice.

“Marvel and DC Comics suffocated creators and fans with Social Justice dogma in their comics while activists actively persecuted non-conformists and Republicans on social media, including me,” Van Sciver adds.

The veteran artist fought back with his own YouTube channel, ComicArtistPro Secrets, where he shares his skills with viewers and criticizes comic book culture.

ANYONE CAN DRAW HARVEY WEINSTEIN! I’ll show you!

“DC Comics responded to this by giving me fewer work assignments and eventually not renewing my contract,” says Van Sciver, known for his contributions to titles like “Green Lantern” and “The Flash.”

“I realized that my YouTube channel was the missing key to a successful independent career in comics,” Van Sciver says. “Having a popular YouTube channel is a much better marketing strategy. I knew that I could make funny videos about pop culture, and advertise my IndieGoGo campaign within those videos, some of which were receiving hundreds of thousands of views and sell a lot of ‘Cyberfrog’ comic books.”

Van Sciver’s initial victories came with a price. He and some indie peers were slammed as hate merchants who attack vulnerable groups, all under the moniker of “ComicsGate.”

“We were called bigots and ‘Nazis,’ articles were written suggesting that we were ‘harassing’ women and trans people,” he says. “A genuinely hostile attempt was made to suppress people who were trying to succeed outside of comics, independently, as though we were actually evil.”

Van Sciver fired back by focusing on his customers.

“Not only would my comic books be a better product than my competitors, but I would create a family atmosphere between our small business and the people who were good enough to buy and support ‘Cyberfrog,’” says Van Sciver, whose first IndieGogo campaign for that character raised more than $500,000. “People wanted to hear me talk about my comic book, and customers respected my straightforward approach to business.”

Talented comic book artists can create the next great character or story line, but that’s no guarantee people will see it.

“I learned it doesn’t matter how good of an idea or product you have if nobody knows it exists,” TenNapel says.  “So while I’m in this business to tell great stories and come up with great characters, the business hinges far more on reaching a mass audience.”

Having a track record in traditional comic books never hurts, but the indie comic book artists HiT spoke to said that isn’t a requirement for indie fame and glory.

“If my huge fan base and track record were what’s making the difference, then every project should be a success. But they’re not,” says TenNapel, currently promoting “Earthworm Jim 2: Fight the Fish.” “About half of my projects and businesses fail. It’s because my past success only gets me so far.”

Chuck Dixon’s comic book resume is the stuff of legends. He co-created the iconic Bat villain Bane and fleshed out a major run on “The Punisher,” among other achievements.

Dixon still stumbled out of the gate when he went solo.

“The first projects were failures. That’s where I discovered that social media is a lie … just because you have x amount of followers doesn’t mean everyone will see your posts,” Dixon says. “I have friends who have crowdfunding campaigns, and I won’t find out about it for weeks.”

Far better, he says, is building an email list. If creators need to “partner up” with marketers skilled in this area, make it happen, he adds.

“You really do need someone who has a talent for this kind of promotion,” he says. It’s a far cry from his early days in the industry, when he could spend his time writing, meeting deadlines and letting others tackle the marketing efforts.

“Once upon a time you did comics and that was your job,” says Dixon, currently working on an adaptation of author John Ringo’s zombie novel, “Black Tide Rising.” “Now, you kind of have to do everything. You have to do videos, have to do crowdfunding … all these different levels of promotion.”

Comic book artist Mike S. Miller went the indie route thanks, in part, to President Donald Trump. It’s not the reason one might think, though.

The Obama economy left Miller feeling blue … and unwilling to take a stab at independent publishing.
Trump’s election changed that.

“I just felt like anything was possible,” says Miller, who created Blacklist Publishing with a friend after Trump’s shocking electoral victory.

“Having been blacklisted for my faith and my politics in the past, I thought it apropos to use the moniker,” notes Miller, who previously contributed to “Adventures of Superman,” “Wolverine” and other titles over a 28-year span.

How To Draw Comics Like a PRO! Cover Layout

Miller drew inspiration from early indie comic book pioneers who successfully created their own niches. And he took studious notes.

“These people had found another marketing platform that was working incredibly well: Youtube,” says Miller, who also gathered emails from fans at various comic book conventions. “I started streaming and cross-streaming with these guys and built up an audience of comics fans.”

LESSON 4: Solopreneurs must hustle to compete

Miller scored with his first indie title, “Lonestar: Heart of the Hero,” generating north of six figures. It still taught him some valuable lessons about going solo, like how it eats into your time at the drawing board.
Promotion is essential, but there’s a price to pay for it.

“The majority of my backers are people who found me through YouTube and Facebook livestreams and advertisements. Was that hard? It was a lot of work. Endless hours of live streaming, promoting, spending thousands and thousands [in] advertising,” he says. “I sacrificed hundreds of dinners with my family to make it this far in crowdfunding, and if you’re not willing to make that effort and those sacrifices, don’t expect you’re going to succeed based on a career in comics alone.

He also realized the folly of creating unrealistic deadlines.

“I expected too much of myself, and I depended on people who didn’t deliver on time. These pitfalls of scheduling eat away at a deadline inch by inch until you find yourself well beyond your delivery date, and that leaves a bad taste in the mouths of your backers.”

“The idea is to deliver, and over-deliver when possible, and that’s something to keep in mind on every campaign,” he adds.

Van Sciver boasts a 25-year run in traditional comics, but he says budding creators shouldn’t be cowed by that background.

“Your resume isn’t as important as it used to be. Social media marketing is everything now, and I’ve seen inexperienced talent consistently outsell industry legends because they’re more fun and interesting on YouTube, Twitter or Instagram,” he says.

Hey everyone! Have you joined the mailing list for The Complete 90’s CYBERFROG: WARTS AND ALL yet? I’ll send you an exclusive promo card!

TenNapel says right-of-center creators may find resistance within the comic book industry, but there’s still a crowd eager to hear their stories on their terms.

“There is a right-of-center audience that is tired of paying for leftists to create stories that hate God, family and country,” TenNapel says. “There is a lot of overlap and nuance between different tribes. But more than ever I’m hearing from conservatives and Christians who support my work and I feel stronger because of them instead of just being punished for my world view.”

His supporters do more than keep his work flowing. They send a message with every donation.

“I would encourage the consumers of story to please find right-leaning artists you love and buy their media instead of paying billions to companies that only work to destroy your family, your job and your reputation. Buy what you want repeated,” TenNapel says.