After years of being cast as bikers, demons and other miscreants, Feinberg said, “enough.” Now, he’s the driving force behind a kid-friendly Christmas caper. He couldn’t be happier.

“Santa’s Boot Camp” follows a group of Santa’s Elves who go on strike, forcing some reluctant kids to save the holiday. Eric Roberts co-stars as a beleaguered mall Santa. It’s a Yuletide yarn with a message. We all can be naughty … why not try being nice?

“The kinds of roles that I would get would be mean, killer prison guards,” Feinberg says. “After a while it just got old. I didn’t want to live in that energy every day.”

He tried to show casting directors he had much more to offer. The classically trained actor had performed Shakespeare and plays like “Of Mice and Men.”

They simply wouldn’t give him that chance.

Even his height worked against him. He recalls not making the cut for a “Band of Brothers” audition because they sought talent six feet tall and under.

That left him with a simple choice.

“I could have toughed it out like the Rock, done B movies or TV series playing these prison guards who kill people,” he says. “Or, I could say this isn’t satisfying creatively.” 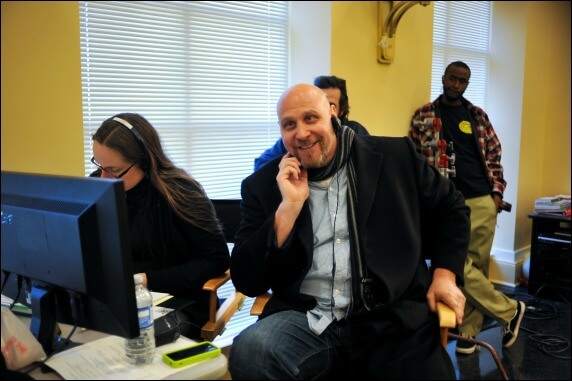 Feinberg went on to start the Creative Studios of Atlanta film academy. The school teaches young actors in his home town the nuances of acting on screens large and small. CSA’s graduates have appeared in some high-profile projects including “The Walking Dead,” “The Hunger Games,” “12 Years a Slave” and “The Blind Side.”

The academy trains students in a variety of disciplines, practical course prepping them for tomorrow’s content auditions. Consider CSA’s specialized acting classes for romantic comedies and science fiction fare. The former goes over everything, including “how to hold your head during a kiss,” he says.

Feinberg, who previously appeared on “Buffy the Vampire Slayer,” “Charmed,” and “Star Trek: Enterprise,” draws upon his own acting lessons.

“I studied with a lot of teachers over the years … some excellent, some pretty bad,” he says. He gives his charges the “buffet method,” giving them a variety of acting exercises to see which ones fit them best.

“We only work with kids who really wanna go to work in this industry. We have to meet the parents, tell them to commit, too,” he says. Stage parents aren’t allowed to have the final say. That goes to the students.

Not every CSA graduate ends up on screen. That’s the true Hollywood story. That doesn’t mean they’ve failed the academy, though.

Feinberg recalls one parent telling him his son no longer acts, but CSA’s lessons gave him the confidence to be himself.

Feinberg isn’t bitter about his Hollywood days, even if it didn’t follow his preferred script.

“I have three residual checks in my wallet … [the industry] was good to me, but my soul wasn’t satisfied doing that level of work,” he says.

Now, his children can watch, and learn from, daddy’s film new projects.

“My six year old daughter said, ‘Dad, I know what Santa’s Boot Camp is about. It teaches people to be nicer to each other,’” he says. “I can live with that.”

“Santa’s Boot Camp,” which won the Director’s Gold Award at the International Family Film Festival, will be released Nov. 15.