Swofford wrote “Jarhead: A Marine’s Chronicle of the Gulf War and Other Battles,” a brutally honest account of his time serving his country.

His story was that of so many wearing the uniform. He was the grunt built for combat, raised on war films and stories of veterans waiting for that moment when they can be the hero they always imagined themselves to be.

That moment never fully came for Swofford. That’s what makes both the book “Jarhead” and the 2005 film adaptation starring Jake Gyllenhaal so riveting. It’s different, it’s honest, and it shows the good and bad of military service as well as the sacrifices the average soldier endures.

Universal, the studio behind beloved franchises like “Fast and Furious” and “Jason Bourne,” has spent the last few years milking the “Jarhead” name. First, there was “Jarhead 2: Field of Fire – Unrated Edition

Having not seen the second installment to possibly the most bizarre franchise ever, this reviewer popped in “Jarhead 3” as more of a curious observer.

Would this be a slick sequel that paid homage to the ideas and insights of the original? Or was it another VOD cash-in from a company already famous for them?

“Jarhead 3” features a hot-headed Marine (Charlie Weber) who joins a team guarding an embassy in the Middle East. He starts causing waves because he doesn’t follow orders well, but he’s got a good eye for danger. After attempting to warn his team of an impending threat and being ignored, he’s proven right when the embassy comes under attack.

The Marines need to protect the Ambassador and civilians, take out the bad guys, and there’s also something about a random mission to grab a flash-drive or something.

“Jarhead 3” manages to check all the lame action movie boxes:

There’s plenty more, but you get the idea.

Again, while watching “Jarhead 3,” I could only entertain myself by wondering what Swofford would think of this franchise being made out of his book. Maybe he’d shrug it off. Or perhaps it drives him crazy to see the good name of his work being exploited for bucks.

Perhaps he can only laugh as the royalty checks come rolling in. 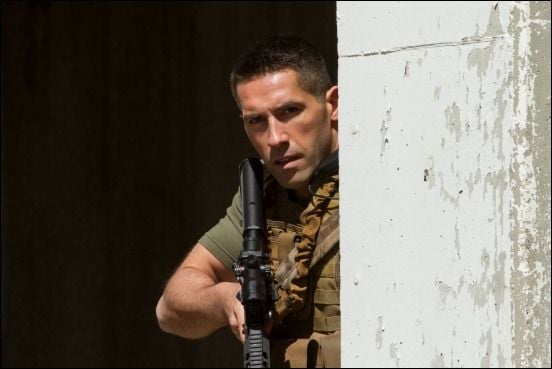 Whatever his opinion, the only thing that would make “Jarhead 3” worth a physical purchase is a special feature where Swofford himself reviews both the film and franchise as a whole.

In case it’s not quite clear yet, fans of the book “Jarhead” and the film should steer clear of this movie. Not only does it have nothing to do with Swofford’s story, it is blatantly opposed to the original book’s themes.

The entire point of “Jarhead” was the absence of combat. It was meant to be a realistic take on the mentality of a soldier prepping himself for a war he would never get, isolating himself from the world until he has nothing left.

“Jarhead 3” has one point: combat. It’ doesn’t care about exploring new ideas about military service or character. It’s only goal is to use its cardboard figures to display enough action that might convince viewers to drop a few dollars.

The flick flashes some respect for Marines and servicemen and women in general, but it’s also far more clueless than the first film. Lacking Swofford’s firsthand knowledge, the story comes across as being written and produced by people who only know Marines through television and movies.

FAST FACT: Anthony Swofford followed up 2003’s “Jarhead” with “Hotels, Hospitals and Jails,” a memoir about his RV trips with his ill father.

Alas, in an attempt to be positive, I will attest to some redeeming qualities in “Jarhead 3.” Beyond the respect shown for members of the military, we see old pros like Scott Adkins (“Zero Dark Thirty”) and Dennis Haysbert (“24”) drop by to bring some macho credibility to the proceedings. The action scenes are sometimes impressively shot and staged for an apparently low-budget production.

Is it all enough to recommend “Jarhead 3?” No. If you’re desperate for some “hoo-rah” action then go for it. You won’t be let down.

For those not accustomed to watching bargain-bin action movies and finding pleasure even in the bad of the film then stay away. Revisit the original “Jarhead” again.

Better yet, read the book.

And if you’re really that desperate to watch some brave heroes defend an embassy and be all they can be, then go rent or buy “13 Hours,” a film with a similar plot based on the true Benghazi tragedy that packs way more heat in every way.

The “Jarhead 3” Blu-ray combo pack includes rated and unrated versions of the movie (the unrated feature is one minute shorter), a digital copy, and a “making of” featurette.