Jack Posobiec went from serving his country overseas as an intelligence officer to thwarting bad guys in a glossy comic book.

Neither gig was an accident.

The project is currently raising funds via an IndieGogo.com campaign – and it needs your help.

HiT reached out to Posobiec on why he took such a dramatic career detour, Andrew Breitbart’s enduring influence and much more.

HiT: You’ve worn a number of interesting hats in your career so far … what was your first reaction when you were approached about this new project?

Posobiec: When the “Agent Poso” team first contacted me I was floored. Working with people like Chuck Dixon, Brett Smith and Sergio Cariello is amazing. Growing up loving comics, I never thought I’d be the subject of one myself!

HiT: What did you learn about the comics industry, or at the very least the process behind creating a comic from scratch, that surprised you most?

Posobiec: One thing I learned about producing comics is the amount of detail and design that goes into the art itself. I’ve always been a story and characters person myself, but working with Brett and Sergio I’ve really grown a deeper fascination and appreciation for what they do – taking these ideas and putting them on the page, drawing from a huge history of influences and array of genres.

They are true masters of their craft.

In addition, I’ve learned so much about crowdfunding and how it allows indie creators to connect directly with the audience in a completely different way than ever before.

HiT: The “Agent Poso” campaign teases action, adventure and a dash of political humor. Can you expand a bit on the latter, and why you wanted it to be part of the book’s DNA?

Posobiec: So, as far as the political humor, we saw this story as a way to connect with people who enjoy politics on a day-to-day basis but also for people who are totally checked out of the process.

I run a very tongue-in-cheek social media presence, especially on Twitter, so there’s going to be jokes in there that are deep references that only the most eagle-eyed politicos will get, but others that are just surface-level that everyone can enjoy.

This isn’t just a story for D.C. wonks. Yawn! Plus, this is set 10 years in the future so there’s going to be lots of space to fill in what’s transpired in those years – and it’s a lot!

HiT: Your crowdfunding campaign is banking on Red State audiences which makes sense. Is there a fear of preaching to the choir with the finished comic, though? Or does the comic push beyond that group?

Posobiec: This is definitely a story that red state audiences will love but easily something that anyone could enjoy, even people who couldn’t care less about politics.

Andrew Breitbart said politics is downstream from culture, so it’s about time someone on the conservative side of the house started making culture for the mass audience. This is just the first attempt in a 5-year plan we have to launch an America First entertainment industry that is disconnected from the Hollywood Woke Agenda, but make films with classic stories, heroes and villains that everyone will enjoy. 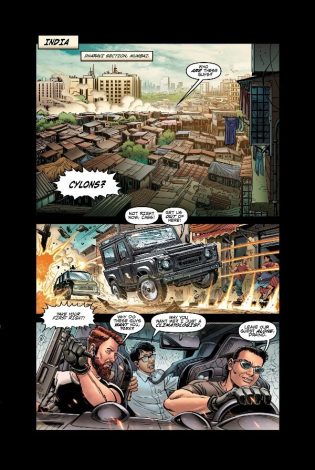 HiT: Are you eager for similar follow-up projects? If so, what could you imagine for future “Agent Poso” adventures?

Posobiec: We’ve got enough stories for at least a dozen Agent Poso volumes and potential for spin-offs too. In this future world we are playing with a What If scenario, so it’s post-Trump in the sense that he’s gone and some other basic establishment-type president is back.

Now there’s an expansionist Greater China, a resurgent Neo-Ottoman Caliphate, Europe split again between socialist West and traditional East, and an America that’s beset with a new US-Mexico Demilitarized Zone. I think we’ll have lots to work with!

HiT: How else can conservatives fight back and/or reclaim pop culture? The messaging out of Hollywood, publishing and related industries is getting more progressive …

Posobiec: Conservatives need to get into the culture fight and put their money where their mouths are. Podcasts, speaking tours and viral videos aren’t going to win back the culture.

We’ve seen how Hollywood has been able to push us to the Left in a shockingly fast time span. But it wasn’t that long ago that James Bond, Hulk Hogan and Rocky were all fighting communists.

A tribute to the life and career of Nikolai Volkoff

By using these independent platforms available to us through the internet and social media today, we are able to connect and create our own interdependent networks that support one another and support content creators that share our values rather than send our family’s money into the bank accounts of anti-Christian Hollywood corporate elites.

And we’ll have fun, too because that’s what it’s all about at the end of the day!