“Is That a Gun in Your Pocket?” is less a satire than a tirade against Second Amendment devotees.

It’s not preaching to the choir. It’s inviting the choir into its home, cooking it a three-course meal and rubbing its collective feet.

But is it funny?

A sure sign of comic desperation comes when the characters laugh along with the jokes. It’s like canned laughter brought to life. It didn’t work on those classic sitcoms. It falls very flat here.

Is That a Gun in Your Pocket? Official Trailer 1 (2016) - Andrea Anders Movie

Welcome to Rockford, Texas, a town which loves its firearms. How much? The town sign reads, “Live Free, Shoot Straight.”

That’s hardly a problem until a hopelessly contrived accident occurs involving an armed teen. No one dies, but the town’s gun culture is suddenly a clear and present danger.

So says a well-meaning mom (Andrea Anders) who concocts a plan to prevent a future tragedy.

“Every avalanche starts with a single snowflake … maybe I’m that snowflake,” she says. 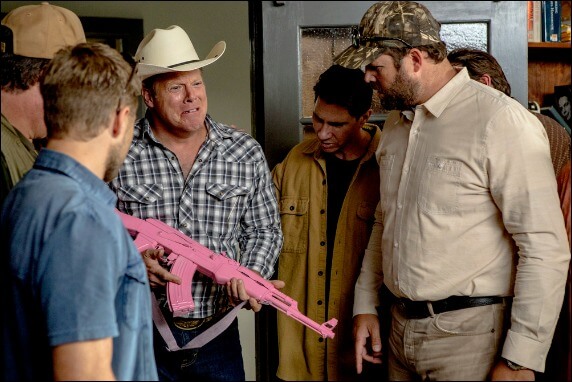 Before you can say, “Hey, Spike Lee cribbed from ‘Lysistrata‘ last year,” the local women go on a sex strike.

Get rid of the guns, or keep your pistols holstered. Permanently.

Of course, this presumes that women can go without sex and men simply must have it. That’s the kind of hoary cliche Social Justice Warriors might shred. Latino activists, in turn, could pounce on how the film’s lovely Latina character (Fernanda Romero) is the only woman who could be described as sexually obsessed.

And, of course, this Texas town doesn’t feature a single woman who loves guns like the menfolk do.

All of this might be “problematic” in a different context. We could see think pieces starting with, “We Need to Talk About This ‘Pocket’ Film.”

Instead, given the fervent pro-gun control angle, expect any blowback to be modest.

Then again, any movie goer might carp about casting the great Cloris Leachman as the umpteenth sex-crazed senior. Was Betty White busy?

Maybe White’s agent read lines like, “F*** them and their liberty,” and advised her to pass.

It all adds up to a tepid gun control lecture, complete with dubious gun statistics and cartoonish defenses of the Second Amendment.

By the time an NRA stooge enters the frame you’ll wonder, “what took him so long? Did he get lost on the way to the set?”

We also get aggressively debunked “facts” like how there haven been at least 74 school shootings following the Newtown massacre.

Another bit of alarmism? That terrorists can buy 50-caliber rifles at any gun show in the U.S.

What can you expect from a hopelessly one-sided op-ed gussied up as a comedy? How about some laughs? Nothing doing here, although the ensemble cast acquits itself honorably. Both Anders and her on-screen beau, Matt Passmore share some tender moments.

Old pros like John Michael Higgins try their darndest, but the material simply fails them. 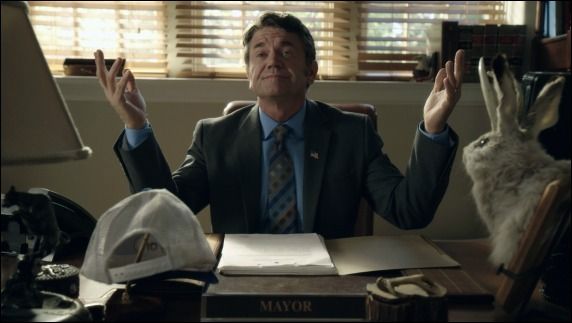 False choices abound in “Pocket’s” narrative. “Which do you love more, your guns or your family?” one character asks. No one in the town can summon a full-throated defense of gun rights, though. They’re too busy commiserating about the lack of sex.

Writer/director Matt Cooper clung to this project like Charlton Heston to his beloved rifle. He wrote the script roughly 20 years ago, finally raising enough cash to film it on his own terms.

The film itself deserves far less applause. Even those who clamor for more gun rights will wish they stayed far away from this “Pocket.”

HiT or Miss: “Is That a Gun in Your Pocket?” gathers a game cast for a cliched tale gunning for NRA devotees.