Does it depend on the maturity level? Is it simply a matter of adding horror to the genre of books a child reads?

For that matter, should children even be reading horror novels?

Actually, I’ll address that rhetorical question. Any child who has ever read (or been read) stories by The Brother’s Grimm has read a horror story. For that matter, the Grimm stories have the structure, tone and dread-inducing qualities of most contemporary horror books.

Also, children who have read any of book with the words “Harry Potter” in the title are, likewise, able to handle the intensity of some horror stories. 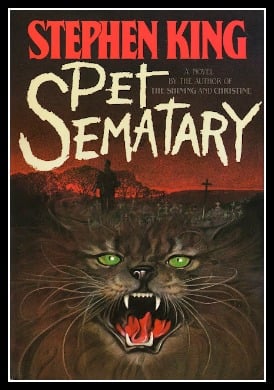 .” I was thoroughly engrossed in King’s re-telling of W.W. Jacob’s “The Monkey’s Paw.” My mother was happy to see me read the first of many novels by King.

However, it should be noted that I was 10 years old at the time. Reading “Pet Sematary,” like many of King’s other great, ghastly books, led to many sleepless nights.

It’s not King’s fault that I have a vivid imagination, though his novels certainly stoked the fires of the fright inferno crackling in my young mind.

Growing Up Too Fast

My wife had a similar experience with V.C. Andrews, whose novels of incest and murder were too much for her at a young age. Yet, her mother (like mine) was happy to see her reading “grown-up books” and encouraged her to keep it up.

For the record, neither of our moms were fully aware of the questionable content in “Flowers in the Attic” and “Pet Sematary.”

Children of my generation grew up with R.L. Stine, whose thin but engaging YA horror novels read like King-lite. There were also the classic Universal Studios monsters, who remain a visible part of pop culture.

I’m pretty sure I knew who Dracula was before Santa Claus, due to an odd, intimidating Hasbro board game from my youth called “I Vant To Suck Your Blood.” The game’s memorable gimmick was how the player would have to insert their finger in a mockup of Dracula’s mouth, push a button and have two tiny red markers leave an imprint of “blood.”

I’d always play the once-popular game with the neighbor’s kids but would pass whenever it was my turn to insert my index finger into the mouth of the world’s most famous vampire.

,” one of the most curious children’s films I’ve ever encountered. Despite growing up in the decade where movies like “Return to Oz” and “The Never-Ending Story” were especially intense for PG-rated children’s films, this new film left me with strong reservations.

Based upon the Aracana graphic novel of the same name, it portrays a a very young Lovecraft – as in H.P. Lovecraft, the world famous, highly influential and brilliant author of “In The Mountains of Madness.”

We meet the author-to-be in 1897, as he’s visiting his insane father in an asylum. Upon returning from seeing his father acting bonkers, Lovecraft’s mother hopes to comfort her clearly traumatized son. She does this by giving her boy The Necronomicon, telling Howard it was his father’s book.

Howard reads it intently, falls asleep and finds himself in the world of R’yleh. Howard has encounters with everyone from Dr. Herbert West (of the “Re-Animator” fame and voiced by Christopher Plummer) to Cthulhu himself.

The fictional tale blends bits of Lovecraft’s life with quotes from his works and characters familiar to Lovecraft fans…most of which aren’t small children. While this is a serious minded and genuinely affectionate Lovecraft homage, it’s been presented in just-okay, Saturday morning cartoon quality CGI animation.

Blending the twisted, disturbing ideas of Lovecraft and a children’s CGI comedy is an intriguing idea that doesn’t gel.

Obviously, the intention was to mimic a Tim Burton-esque tone and look but this is way too scary and densely plotted for kids. Its quite creepy and not in a complimentary way. Attempts to be cute and funny are awkward, particularly out of place nods to Sergio Leone westerns, “The Matrix” and, most bizarrely, Phil Collins “Sussudio“(!).

Once Lovecraft gets to R’yleh, there are goofy but grotesque monsters and fantasy creatures. Even children raised on “The Nightmare Before Christmas”  and “The Lord of the Rings” may get antsy, particularly with the stiff quality of the animation.

There are good vocal performances, particularly by Jane Curtain and Ron Perlman. Plummer is barely in this, though he effectively recites the Lovecraft title card quotes that bookend the film.

George Streicher’s score is especially good, “Spot” emerges as the one truly endearing character and this may be a good bet for young teens reading up on the author. However, there’s no way I’d recommend this demonic “Narnia” for its intended audience.

The Shout Factory Blu-ray/DVD release includes a Behind the Scenes featurette that is awfully brief. The film’s writer/director, Sean O’Reilly, seems nice but is obviously reading his lines.

Much better and more informative is the Director’s Commentary by O’Reilly, which is full of intriguing tidbits. Turns out O’Reilly, along with Bruce Brown, Renzo Podesta and Dwight L. MacPherson, co-authored the original 2007 graphic novel upon which the film is based.

His collaboration with Plummer on his previous animated movie, “Pixies,” resulted in their teaming up again here. Much of the O’Reilly clan worked on the film, including Sean’s wife, Michelle, who both co-produced and voices Sarah Lovecraft, Howard’s mother.

” ends with a post-credits scene promising “Howard Will Return in The Undersea Kingdom.” O’Reilly admitted in the commentary that this is the beginning of a trilogy.

Great, except I’m still unsure of who his demographic  is.

Lovecraft fans will be amused but not enlightened. Children who find Gollum scary shouldn’t go anywhere near this.