Oh, how Social Justice Warriors would rush to their Twitter accounts had “Grease” hit theaters today.

The 1978 film is back, courtesy of an extras-laden 40th anniversary edition – “Grease [Blu-ray]

The story may be set in the 1950s, but that rarely stops the outrage mob. These social activists seethe over story elements not battle tested by modern times (and snowflake sensibilities). That certainly makes “Grease” problematic to use their favorite scare word.

For everyone else, “Grease” is still the word … and the music. Re-watching the ’70s sensation (worldwide gross to date: $394 million) is like digging up a time capsule. The signature numbers still thrill, the oil and water pairing of Newton-John and Travolta sizzles all over again. 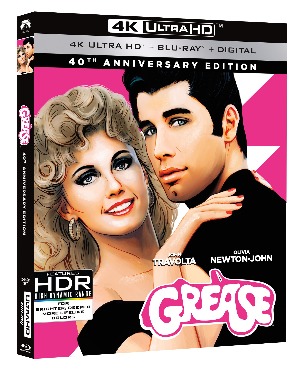 The bits are broad, shockingly so by modern standards. What might click on stage – the musical’s roots date all the way back to 1971 – plays out badly on screen. That’s even within the liberal confines of the movie musical.

RELATED: Why You Can’t Remake These ’80s Movies

The story remains simple and timeless, especially if you’re a teen on the cusp of adulthood. A guy from the wrong side of the tracks lets his guard down one fateful summer, wooing a sweet Aussie.

They unexpectedly reunite in their final year of high school, and their cultural differences spike. He’s a greaser hanging with troglodytes. She’s sheltered, unassuming and unprepared for a romance with this version of Danny.

RELATED: Why ‘Wild at Heart’ Is a Love Letter to America, Warts and All

Forty years later, “Grease” looks better than ever. The colors pop, a candy-colored restoration you could savor with the sound off. That, of course, would be criminal. Numbers like “Summer Nights,” “You’re the One that I Want” and “We Go Together” are as intoxicating as ever.

“Beauty School Dropout” is a prime example. Others heap on the emotions, but you won’t mind a whit. “Hopelessly Devoted to You” stands as the guiltiest pleasure. Reject it at your own peril.

Sober moments are in short supply. Stockard Channing’s “There Are Worse Things I Can Do” is an exception. The number reminds us how critical the supporting players are to the proceedings.

In a sea ot teen caricatures, Channing’s Rizzo remains raw and relatable in her outsized way.

Other themes similarly endure. Travolta’s Danny is ready to leave his teen years behind, but he’s miserable navigating the chasm between high school and the real world. At his heart he wants Sandy all to himself, but he’s caught up in the greaser pose he’s cultivated so carefully. Can he risk all that hard work for a beautiful girl?

Sandy, in turn, is learning life isn’t bubble wrapped for her protection.

Our leads are better off navigating their personal journeys together, assuming their social circles don’t get in the way.

FAST FACT: Henry Winkler of “Happy Days” fame was considered for Danny, but the actor turned the part down rather than be typecast as a ’50s era type.

Any excuse to see a young Travolta dance is well worth embracing. He super-charged pop culture the previous year with “Saturday Night Fever.” Here, he dazzles without any flickering disco balls or dance floors.

“Grease’s” story stalls a time or two, but the cheeky costume design never fails to charm.

So why does this 40th anniversary edition look so good? Let Team Paramount explain:

The studio worked with director Randal Kleiser to restore GREASE to its original vibrancy with the highest quality sound, picture resolution and color. The original negative was scanned and received extensive clean up and color correction using previously unavailable digital restoration tools such as high dynamic range technology. In addition, the audio was enhanced from a six-track mix created for an original 70mm release, giving the music more clarity.

The extras featured in “Grease [Blu-ray]

” include a commentary track with director Randal Kleiser and choreographer Patricia Birch along with deleted/extended/alternative scenes.

FAST FACT” Hopelessly Devoted to You” arrived late to the party. The song was written after the production wrapped, an attempt to add a Newton-John ballad into the mix. It worked.

The alternate ending, though, is both new to home video and a huge letdown.

“This was the ending I had hoped to use,” Kleiser says via an on-screen message. Alas, not only did it fail to make the final cut, the only vision remaining of it is a black and white 35mm workprint. So they colorized it via modern technology.

Blink and you’ll miss Danny and Sandy flying into the sky via “Greased Lightnin'” turn, oh so briefly, into animated versions of themselves.

The other additional scenes remain in less than sharp black and white. Only “Grease” purists need bother with them. Far better is the new feature “Grease: A Chicago Story” detailing the tale’s origins. We see some of the original show’s cast, including Marilu Henner, wax philosophical about the story’s origins.