“Doctor Strange” may be the unlikeliest addition to the Marvel Cinematic Universe.

He wasn’t bitten by a radioactive critter or exposed to gamma radiation. He’s a magician, only without the leggy assistants and out of date ‘do.

He fits in fine all the same.

The origin film also delivers the kind of “wow” factor we once took for granted with superhero films. If that weren’t enough, it delivers bigger laughs than some mainstream comedies.

Dr. Stephen Strange (Benedict Cumberbatch) is a master surgeon and a first-class jerk. He’s not above showing up a colleague when he should be laser focused on the surgery at hand.

Then again, he’s good enough to multitask. Or so he thinks.

His meandering mind sends his car hurtling off an embankment early in the film. The crash doesn’t kill him, but his precious hands are shattered, the nerves beyond repair. Frustrated at the limitations of western medicine, he travels East for a miracle cure.

It’s there he meets the Ancient One (Tilda Swinton), a mystic who does more than heal his ravaged nerves. She mentors him in the mystic arts. He’s a reluctant student. There’s that ego again. Soon, he grows to appreciate his mentor’s wisdom and the strength of his new colleagues.

“Have you seen THAT before in a gift shop,” she teases Strange after he mocks some of her accouterments as nothing more than tourist trap trifles. 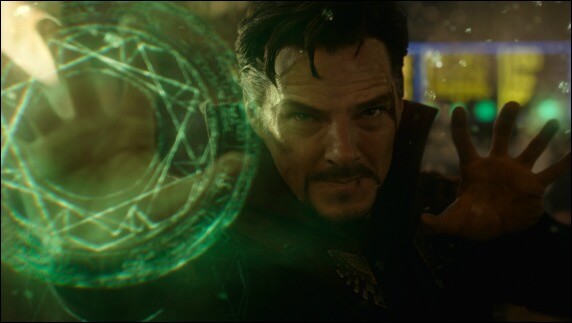 The Ancient One has a good reason to turn this surgeon into a mystical warrior. She needs help against an old student intent on destroying her and her school. The villainous Kaecilius (“Hannibal’s” Mads Mikkelsen) won’t stop until he’s wiped out the Ancient One and anyone daffy enough to stand by her side.

Suffice to say he has bad intentions in that vague way that plagues other MCU products. Audiences will grab enough to play along, though. Mikkelsen, so mesmerizing as NBC’s cannibal reincarnate, adds a layer of menace to a sorely underwritten role.

Cumberbatch doesn’t just look the part of Marvel’s mystical mainstay. He understands the MCU formula. Treat the material seriously, but always be open to a well-placed gag. And “Doctor Strange” is loaded with the latter, genuine laughs that remind us we’re watching adults tromp around in tights.

If you’ve seen the trailer you know the swirling landscape our heroes navigate. It’s like “Inception” on steroids. And while many superhero films suffer from CGI overkill, these effects appear organic despite their digital roots.

The film also knows when to exit, stage right. As neat as the actions sequences prove, they’re ultimately hampered by the magical constraints. After all, we’re watching a man shoot sparks out of his fingertips. There’s only so many ways to make that intriguing.

FAST FACT: As a young man, Benedict Cumberbatch spent a year teaching English in Tibet before fully embracing his passion for the theater.

The film’s terrific cast squeezes in Rachel McAdams as a sort-of love interest who offers more than a few cutesy exchanges. The great Chiwetel Ejiofor co-stars as an Ancient One disciple whose allegiance plays a critical role in both the third act and the post-credits tease.

Marvel is bound to crank out a clunker at some point. No winning streak lasts forever. For now, enjoy both “Doctor Strange” and the fact that the MCU just got bigger, brighter and more fascinating.

HiT or Miss: Humor, heart and mind-bending action. Could you ask for much more from “Doctor Strange?”