It’s not enough to cast a rising star like Jennifer Lawrence or Shailene Woodley. It’s the heavy, or the character who brings an adult sense of seriousness to the project, that matters.

Donald Sutherland did that for the “Hunger Games” franchise. Now, Jeff Daniels gets the heavy-lifting gig for “The Divergent Series: Allegiant.”

With his short gray hair and doughy features, the former Harry Dunne gives the franchise a purpose beyond dystopian tropes.

It’s not enough for the series to match “The Hunger Games,” but it puts “Divergent” in the same conversation.

The first of the saga’s two-part finale finds Tris and Four (Woodley and Theo James) plotting an escape from the walled city of Chicago. Surely there’s other life outside the only home they’ve ever known. They’re willing to risk their lives to find it.

Their collective spirits rise after meeting David (Daniels), the head of an advanced society just beyond Chicago’s borders. David wants to bring piece to Chicago at long last, and he’ll need Tris to help seal the deal.

Tris is sold. Should she be?

You can almost see the essential story elements in “Allegiant” wearing Post-it notes for our inspection.

And, of course, there’s the whole diversity argument. We’re not “pure” or “damaged,” as some of our heroes insist. We’re just people, darn it.

FAST FACT: Shailene Woodley played Mary Jane Watson in “The Amazing Spider-Man 2,” but her four scenes were cut out of the film.

“Allegiant” plays out in effective, albeit limited fashion. The political commentary is less bitter, more easily digested than recent dystopian tales. That said, all the blather about “walls” plays into a current politician’s game plan. Ahem.

And Woodley, while uniformly effective, is no match for Lawrence. Too often Woodley looks disinterested when she’s meant to be pensive. She’s a capable action heroine all the same, using her lithe frame to convey power and poise.

James, at this point in the franchise, is a savant at smoldering poses. He still isn’t given enough dramatically challenging tasks to complete.

The story’s plot holes poke through even the marvelous set design. Most are tied to the new technology our heroes embrace, disk-like drones which provide a number of handy features. They stop bullets, scout ahead and more. But guess who also has access to them? 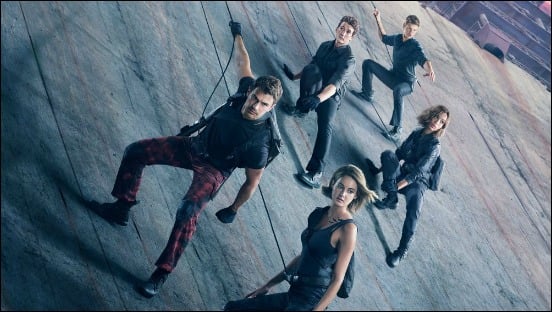 Naomi Watts doesn’t resonate as Evelyn, one of two de-facto leaders back in Chicago. Octavia Spencer fares better, underplaying her role as if realizing the emotions are already running hot as is, thank you.

And then there’s the whole diversity argument built into the franchise. It’s loud and proud here, with characters defending themselves no matter what their biology portends.

“The Divergent Series: Allegiant” must end with a cliffhanger. Still, the final moments offer a measure of closure, just enough to satisfy loyalists and lead to the final chapter.

The final chapter will close a competent franchise, nothing more. But if it opens some young viewers’ minds to how power corrupts and not all authority figures should be trusted, that’s a handsome legacy.