In a perfect world Dave Rubin wouldn’t have to write “Don’t Burn This Book.”

Rubin accidentally joined the Intellectual Dark Web by chatting with folks from both sides of the aisle. Now, he’s 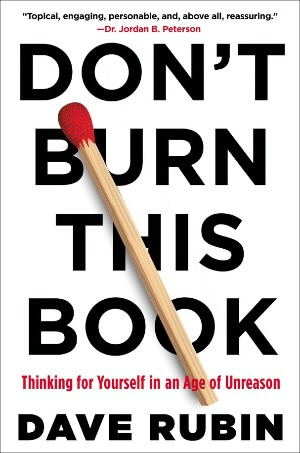 using free speech’s decline as a tool to share his life story, and more, in his easily digested memoir.

“Don’t Burn This Book: Thinking for Yourself in an Age of Unreason” wants to open our minds while sharing his right-leaning take on the culture at large.

Rubin shows a flair for self-awareness while trashing what passes for journalism today.

“If it weren’t for [the mainstream media’s] abject failure to do their jobs, you’d have no idea who I was,” he writes.

“Don’t Burn This Book” offers a primer on Fake News as well as Rubin revealing what happened when he shamed a journalist for trafficking in it.

If you follow any of the biggest names in news the answer won’t surprise you.

Rubin, who is gay, defends straight white men mid-book, a section sure to trigger the usual suspects. It’s more about the Left’s sense of “self-loathing” as much as how Leftists clash with a certain civil rights leader’s famous line.

Part of the book finds Rubin weighing in on a series of hot button issues – the Second amendment, abortion and more. He peels off a few nuggets about each, taking firm but reasonable stances along the way.

It still feels like a detour, and an unnecessary one. His whole thesis revolves around thinking for yourself. Perhaps he could break down in depth how he came to a few of these conclusions, a primer for processing facts en route to a bedrock principle.

As is, the chapter marks the book’s weakest point.

“Book” also isn’t as riotous as one might expect given Rubin’s stand-up chops. A few laugh lines prove ineffective, though others more than live up to his background.

Far better is watching Dave Rubin, the media personality, spring to life. The author shares some personal struggles, both mental and physical, that led to his unexpected fame.

RELATED: ‘The Rise of Jordan Peterson’ Pushes Beyond Partisan Bickering

Rubin remains kindred spirits with Jordan Peterson, the Canadian intellectual who enraged the Left for telling people to clean their rooms and smiting government speech codes. They make an odd pair, but the chapter dedicated to their tour offers some humble life lessons.

Dress for success may sound obvious, but Rubin frames the old saw in a way that could make a difference. Even better is sharing Peterson’s knack for knowing his own limitations.

In today’s age of scorching hot takes, it’s more than acceptable to say, “I don’t know.” In fact, it’s refreshing and raw. Rubin’s thoughts on how we “catastrophize” everything in our First World lives is equally valuable, although it, too, could be better fleshed out.

The author burns plenty of calories repudiating the woke mob, giving specific techniques to keep the pitchforks at bay. He’s right, of course, but for many people the short-term costs will be considerable.

The Left is No Longer Liberal | DIRECT MESSAGE | Rubin Report

Rubin famously left the Left, which he says fueled the book’s initial premise. That transformation’s fallout, including hateful messages from former “allies” who now see him as Public Enemy Nos. 1-5, must be read to be believed.

“Suddenly longtime friends are leaving venomous voice mails, calling me racist and misogynistic, while others send emails denouncing me as a hateful bigot who deserves to die.”

The scariest part of Rubin’s book is how he describes cultural forces aligning to silence dissent. He name checks an Economist story that dubbed The Daily Wire’s Ben Shapiro “a pop idol of the alt-right” as Exhibit A.

Yes, those eager to squelch free expression are on the march, but Rubin and “Don’t Burn This Book” have our backs.

“You’re not a Nazi, you’re just somebody who thinks for themselves,” he writes about Americans who don’t tow the progressive line. That sentence alone justifies Rubin’s cultural ascension. It’s also why “Don’t Burn This Book” should be read by every torch-wielding member of the social media mob.