Comedian Dave Landau is a fast learner in the podcasting game.

Two years ago, the Michigan native replaced Artie Lange as Anthony Cumia’s partner on the latter’s Compound Media podcast. The pair clicked in short order despite Landau having to fill Lange’s considerable shoes.

Landau, who recently earned praise from Dennis Miller, careens from confessional stories to ribald gags. He’s relentlessly funny and surprising, though not for the easily offended. 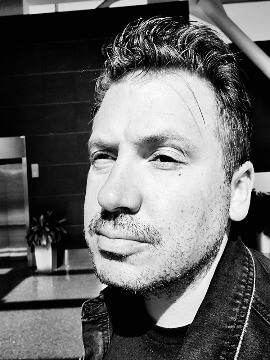 HiT reached out to Landau to find out how he’s processing pandemic life, the slow road back to live performing and what Howard Stern may fear most in our Cancel Culture age.

HiT: You’ve been co-hosting “The Anthony Cumia Show” for a while now … how do you think you’ve changed as a comedian since you first joined the show?

Landau: I would say I’ve become much more fearless on stage in regards to storytelling and discussing my personal life. I’ve shared so much on our radio show that when I perform to my audience, there is an extra layer of comfort now.

They know I’ve changed from the pile of s***, drugged out drunk I used to be. But now there’s a new fear since Covid-19 hit, which is venturing into the unknown.

I really have no clue what to expect the next time I get on stage. I could be doing stand up to a room full of masked people who are all afraid of each other. And if comics have to wear masks, I think we’ll see a lot more ventriloquist acts and that’s terrifying.

HiT: The show is based in New York, the tragic epicenter of the current pandemic. What are you seeing, and sensing, about New Yorkers that isn’t being captured either in the media or on social media?

Landau: Rats are starting to get even more vicious since they lack a food source due to all of the closed restaurants. If vermin are starting to take more daring chances out of desperation, imagine what people getting increasingly low will do.

The city is a powder keg and we still have no clear answers on anything.

HiT: Beyond TACS how have you channeled your creative energies during the pandemic?

Landau: I’ve actually been using this time very positively. Father and Son quality time has never been more available for us, and it’s vital during this thing. I am loving the extra quality time we get to spend together as a family.

I am grateful because I know a lot of people aren’t as fortunate as I am right now. Work wise, I wrote a book about my teen years where I was a arrested a dozen times for alcohol-related incidents. It’s currently in the editing phase. I’m working on a new screen play with my writing partner and animating another book. Anthony and I also started Compound Cinema where he and I rip a movie to shreds.

HiT: Do you have any upcoming comedy gigs … do you get the sense that more clubs may be opening in the weeks to come?

Landau: I have several gigs coming up as early May 29-30 in Fort Myers, Fla. and then off to Arkansas. I think a lot of the states that believe the virus is a punishment by God for a**-eating will let clubs open up first. After a couple weeks, as long as there’s a comedian only figuratively killing, other places will probably follow suit.

HiT: You and Anthony often use jet black humor after tragedies large and small, something most of us once did but might get punished for today… can you share why you embrace that approach and how it can be helpful?

Landau: Gallows/dark humor has always been the comedy that attracted me. Ever since I was a little kid I laughed at things others might find morbid. And I know I’m far from alone on that. I think for me it started as a defense mechanism against actually feeling the sadness.

You laugh to keep from crying is a cliche but there’s truth to that. We’ve all heard “tragedy plus time equals comedy,” but sometimes it’s just funnier to take the time part out of that equation.

HiT: The podcast exists on subscriptions and is part of an independent company. Do you still feel pressure from the media or special interest groups, or have you essentially canceled cancel culture with this platform?

Landau: Everyone says they want an open and honest dialogue until someone does or says something they disagree with. People don’t want a conversation. They want to sit in an echo chamber of their own thoughts which is rarely their own thoughts anyway.

It’s usually some publicly agreed upon safe stance that will get them likes on social media. They’ll write some blended version of popular opinion and act like they’re taking a noble stance when it’s really just obedience.

Dave Landau - Wolf Master - This Is Not Happening - Uncensored

I couldn’t care less about special interest because I don’t believe in it. I believe in equality and human rights. People can come on our show for an actual open conversation about what’s going on, and I’m all ears. I like to hear as many different opinions on any currently divisive subject. Also if someone isn’t controversial or political, any guest can come on the show and we’ll just do something like talk about the movie “Road House.”

HiT: Howard Stern made headlines recently by trashing President Trump, but to my knowledge he’s said little about the missteps made by Gov. Cuomo and Mayor Bill de Blasio … your reaction?

Landau: Everyone has had their missteps because of all the distorted information. Although De Blasio just is a misstep. I loved when he thought he’d throw his hat in the presidential ring based on the qualification of destroying America’s most beloved city.

As far as Howard, I think Stern is a guy who is afraid he’ll be remembered like Don Imus. He has said things in the past that would of course be considered sexist, homophobic, misogynistic and racist by today’s standard. He’s even worn blackface.

Listen to “HiT ‘Cast 105: Dave Landau Tells the Truth about the War on Comedy” on Spreaker.

People think he wants to be part of the Hollywood elite, but I think he just wants his story arc to lead into a twist at the end. Once the most irreverent shock jock on the airwaves who eventually realized the errors of his ways and rose above it all to become even better than the best. The true King of all media. But do you believe he really changed and “evolved” with the times? Or do you believe it’s the last desperate act of a tormented narcissist?

I’ve never met that man but as a long-time listener, I don’t really buy the transition. 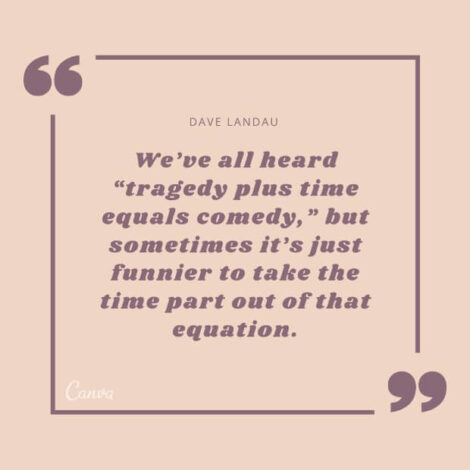 HiT: On a recent TACS you mentioned how midwestern comedy crowds weren’t as easily offended as coastal audiences. Can you expand on that a bit?

Landau: Coastal crowds are filled with people and industry often afraid to laugh at anything that could be deemed offensive. Which today is absolutely anything.

They might work in an office where a “micro aggression” can cause them to lose their job and everything they’ve worked for in life. Something so small and meaningless that the word “micro” is actually used to describe the “offense.”

I think the other 48 states just have more people who aren’t constantly on edge about laughing at the wrong thing and “triggering” some angry white lady with blue hair. There is, of course, exceptions to all of this but I always feel a little more at ease in a Detroit comedy club than a “mic” at a ferret-friendly vegan hipster decaffeinated tea boutique located in a part of town that was way more interesting when it was trap houses.