20th Century Fox hid it from most press outlets, forcing scribes to see the movie after it reached theaters. That’s rarely a good sign. No critics screenings typically means the studio knows it’ll get shellacked.

So here’s the latest Critic v Critic installment dedicated to this sci-fi sequel.

Does every high falutin’ film critic now officially expect every movie they see to be deep, profound and suitable for a Best Picture Oscar nomination? I’m the first to admit that “Independence Day: Resurgence” wasn’t great cinema, but it was darn entertaining cinema and that rarity, a sequel that was actually better than the original.

Does the film suffer from banal dialog and lots of leaps of logic? Of course it does. But it’s a summer sci-fi tentpole movie. They all have that problem. The difference is, in this case I walked out of the theater entertained.

The cast of #IndependenceDayResurgence should never be allowed to act again

Christian Toto: I’m all for a breezy summer romp. And I certainly don’t expect Shakespearian dialog from a sci-fi adventure. But when the screenplay is this bad, the action this incomprehensible (and the pandering to the Chinese ticket buyers this obvious) … it’s the proverbial record screech sound effect.

Critics can swallow some measure of cornball storytelling, but this overwhelmed even my generosity toward B-movie basics. What parts of the movie did you find entertaining?

​Taylor: Did you even see the first film, Christian? It was as cornball as a sci-fi action film can get, overacted, banal dialog, dopey storyline, etc. And yet it was successful and remains a popular entry in the genre with a surprisingly big audience. Heck, I don’t even like the first one that much.

And yes, the inclusion of actress Angelababy (great name, eh?) was definitely for the Chinese audience, but when they represent such a massive ticket-buying audience, can you blame the studio? And frankly it helps create a diverse case both racially and gender-wise. You’re good with that, right?

​Toto: ​I did see the original film, and I remember rolling my eyes and clucking my tongue along the way. It also had a young, vibrant Will Smith and an original blast of landmark destruction. That’s par for the course now.

Frankly, the blockbuster bar has been raised since then, and we expect not just glorious action but dialog that doesn’t make our teeth hurt. Think the rapidly improving “Mission: Impossible” series.

As for diversity, it’s a win one, lose one affair. They add an attractive Asian co-star, and then give her literally nothing to do save look pretty. Ah, progress.

Was there a scene that stood out as being worth the ticket price?​ 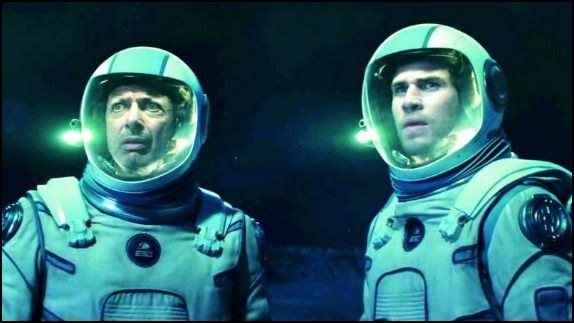 ​Taylor: I thought the exterior scenes on the lunar base and really all the special effects were uniformly excellent. And maybe that’s where I am with these sort of sci-fi epics. If it’s not truly horrible, I’ll give it a pass as long as they splash up good visual effects every few minutes, and “Independence Day: Resurgence” definitely had that going for it.

#IndependenceDayResurgence was reasonably better than reviews would suggest

Sometimes I go to the theater to be challenged, to learn and to expand my range of experiences, and other times it’s just for sheer entertainment. Was too much screen time devoted to the cast from the first film? I don’t think so. But I can see how you might…

HiT: I always enjoy seeing a film pay tribute to older actors. Too often Hollywood ignores you when you hit 40, something especially true for actresses.

Here, that decision reminds us how little charisma the new kids on the block bring to the party. Liam Hemsworth is no Chris Hemsworth. And Jessie T. Usher is no Will Smith (yet). That leaves us with a raving Brent Spiner and Judd Hirsch acting like he’s in a bad Borscht Belt comedy. Oy.

Taylor: Let’s just agree to disagree on this one, Christian. And I won’t invite you over for the extended director’s cut Blu-Ray in a few months!

What do HiT readers think about “Independence Day: Resurgence?” Who made the right call?