Her seventh book, available July 28, explores the complicated connection Americans have to the rich, famous and increasingly political.

The new book, “Celebritocracy: The Misguided Agenda of Celebrity Politics in a Postmodern Democracy,” may catch conservative readers by surprise on a number of fronts. It’s why HiT reached out to Lawrence to learn more about her book and the research behind it. 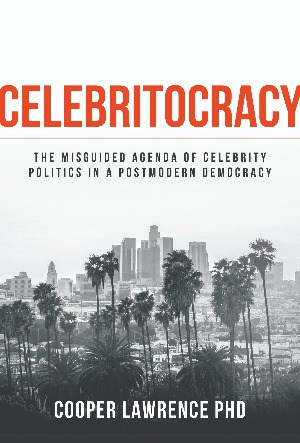 HiT: A key chapter in your book recalls how celebrities rallied to help the victims of Hurricane Katrina, but their lack of follow-through ended up hurting many of the people they initially helped.

Is it the Hollywood media’s fault for not holding stars accountable? How else can we avoid similar situations?

Lawrence: On the contrary. The media was unwavering in their efforts to hold stars accountable for their various, failed Katrina home building programs.

The deficiencies of Brad Pitt’s (now defunct) Make It Right Foundation were covered extensively by The Daily Mail as was the breakdown of Oprah’s Angel Lane by New York Magazine.

The problem isn’t the media coverage, the problem is the public’s inability to see beloved stars as flawed. It’s the ultimate cognitive dissonance. Since Oprah Winfrey is one of the most cherished, charitable and self-less celebrities on the planet, fans are not going to jump on any anti-Oprah bandwagon.

Even if those stories are true.

The stories were out there, but they were ignored. The takeaway is that even admired superstars like Pitt and Winfrey can get swindled. If people of their means, caliber and connections can be taken by those intending to deceive, what does that say about the rest of us in our own smaller attempts to help?

The only way to avoid similar situations comes down to research. Make sure those we partner with do what they say they will do, but also, as you suggest, follow-through.

In stark contrast and an example of how to do it correctly, was Bon Jovi’s home building project in the Bayou, Bon Jovi Boulevard. That was a success because Jon was hands on from the very start and continues to stay closely connected to the project that bears his name.

HiT: You talk in great detail about empathy and how it impacts the causes stars and starlets espouse. Can you sum up that part of your book and explain why it’s not as clear cut as some might think?

Lawrence: Empathy, as a concept, is much more complex than the narrow definition we usually give it (“compassion for others”). People think actors are good at what they do because they’re good at empathizing with the character they’re playing.

Sometimes that’s true, but not always.

The problem is, the viewer makes the leap that a celebrity must be empathetic in real life, too. This is why we expect them to save us when there is a disaster or a need. But the truth is, and several studies have shown this, including an extensive 2016 Harvard study, that celebrities are more susceptible to something called, “compassion fatigue.”

Studies have found that celebrity endorsements of a candidate softens their image… That may no longer be the case.

That means their empathy is in limited supply because of their work. Not just their talents but as a result of the stress and burnout that comes with it.

Furthermore, research shows that humans, in general, empathize more with those who are more similar to us and less empathetic towards those who are different. Take that concept and couple it with celebrity empathy which has been found to have a reciprocal relationship with itself.

In other words, if you show me compassion, I’ll do the same for you when you’re in hot water because we’re so alike in such a unique way. This explains why stars can bounce back from terrible scandals. The conclusion you should draw is that empathy isn’t just a blind “compassion for others,” it’s biased.

HiT: From your book: ‘Being conservative in Hollywood is still like being gay was in the 1950s—you do it, but you don’t talk about it publicly because there will be consequences’ – do you see this problem getting better or worse moving forward? What consequences do we NOT hear about in this regard?

Lawrence: Much better. Conservatives in Hollywood are no longer afraid to show themselves and voice their opinions. People who you never knew what their political leanings were are now empowered to shout it from their twitter handles.

People like James Woods, Jon Voight, Dean Cain, Scott Baio, Stacey Dash, etc. etc. the list goes on and on-are more vocal than their celebrity predecessors. We live in an amazing country where our first amendment rights are for all of us, including celebrities who once feared studio blowback or audience rejection.

That said, those mentioned are mainly people who don’t need to beg for work. They can have a voice and a career.

The consequences we don’t hear about are for young Hollywood. Up and coming stars still need to keep their opinions-liberal or conservative-to themselves for fear of alienating an entire audience for something that has nothing to do with their talents.

HiT: We can blame stars for stepping beyond their roles, doling out medical advice, etc., but we’re part of that problem… explain.

Lawrence: Whether you get the bulk of your news from TMZ or elsewhere, celebrity news is unavoidable. Their voices infiltrate our daily lives with their fervent opinions on all matters of life. This glut of celebrity opinion masked as information and expertise immediately devalues real expert knowledge.

It’s our fault for taking what a celebrity says as fact without realizing that they are usually trying to manipulate us to sell us something and make money off of our naivete.

Gwyneth Paltrow comes to mind. She’s not a doctor, or an expert in anything other than acting, yet she is continually doling out unsolicited advice and trading on our fears to get us to buy her products. She invents problems we don’t have, then offers us a solution for that non-existent problem.

For example, the FDA (who are the real experts) who are tasked with making sure that all of the products you use are non-toxic. Yet, Paltrow has convinced her followers there are toxins everywhere, which is simply untrue. It behooves the consumer to close their wallets to say no to these celebrity snake oil salesmen and put a stop to rich people getting richer off of hard working people using non-experts and bogus information passing for science.

HiT: Did your views on celebrity activism change at all as a result of writing the book?

Lawrence: They did. Prior to researching “Celebritocracy” I, like many others, assumed that when a celebrity got involved in a cause it was thoroughly researched. Now I see that celebrities are more likely to be taken advantage of and to act impulsively where a charity is concerned.

The optics of saying “no” are worse than the celebrity lending their name.

Celebrities are not in the business of running charities, which is a complicated endeavor, so why would they expect success? What I learned was that the failure rate is extremely high and risky as is the potential for exploitation.

It’s also true that a well-intentioned celebrity is not marred by a failed attempt at a legitimate act of altruism. Conversely, a celebrity’s bad behavior, as in the case of Lance Armstrong, can devastate a worthy charity.

HiT: What are your thoughts on celebrity activism during the pandemic as well as the George Floyd protests?

Lawrence: These are two entirely different questions. Let’s start with the pandemic. Celebrities were relatively quiet, but those who did speak up showed how tone deaf they were and what a bubble they live in. Ellen DeGeneres is a good example. When she compared home confinement to being in prison while she sat in her $24 million dollar beach house, her fans rejected her.

Even more egregious was Ashton Kutcher’s scheme in which he conned his followers into mitigating his tax bill by getting them to purchase his vineyard’s wine as a “charitable donation.”

Mila and I are launching Quarantine Wine!
100% of the profits will go to Covid-19 relief efforts!#QuarantineWine #SocialDistancinghttps://t.co/kGJt9YFkEP pic.twitter.com/I7GCXOR5op

Kutcher is worth upwards of $250 million dollars. He was asking a largely unemployed population to buy his wine thus donating to the charities of his choice.

How about just eliminating the middleman (us) and give to those “carefully chosen charities” yourself? It was paternalistic and insulting.

For the most part, Hollywood stars did a great job showing support for the Black Lives Matter movement without trying to step into the spotlight. In my opinion, they did a great job being allies, calling for change in Hollywood and keeping the narrative going subtlety without making the movement about themselves.

HiT: Do you think Hollywood will have more or less impact on the 2020 presidential campaign compared to 2016 … and why?

Lawrence: In a word, less. I’ve said this extensively in “Celebritocracy” and I continue to believe that the biggest celebrity Trump had on his side was himself. That continues to be true. Liberal Hollywood’s endorsements of Joe Biden, while not surprising, have in the past shown to be helpful.

Studies have found that celebrity endorsements of a candidate softens their image. It also reduces any negative emotion toward that candidate, making the likelihood of the public voting for them greater. That may no longer be the case.

Ironically, social media may have changed our collective impressions of the celebrity sheen and glow. They talk to us directly through their posts and we see who they truly are and it’s rarely a pretty picture. Voters, and especially young voters, are more likely to reject a celebrity who tells them who to vote for.