Screenwriters Chad and Carey Hayes, the twin brothers who also co-wrote the 2013 original, said Ed Warren was foremost on their minds while the horror sequel went before the cameras.

Lorraine Warren wouldn’t have it any other way.

“She spoke of him so warmly. ‘Don’t portray him in any way he’s not,’” the famed demonologist told them. Ed Warren died 10 years ago, but that didn’t matter.

“It’s like he never left … he’s still in her heart,” Carey Hayes says. “This is a love story first. And there’s a horror movie happening behind it.”

Is this any way to scare us out of our seats?

Apparently so, since the first “Conjuring” earned rave reviews and hauled in $319 million worldwide. That makes it the second highest grossing original horror movie of all time behind “The Exorcist.”

The new “Conjuring” once again features Lorraine and Ed Warren, played by Vera Farmiga and Patrick Wilson. They’re reluctantly drawn into the case of an English family whose daughter’s behavior could have demonic roots.

The brothers aren’t making their story up from whole cloth. The plot is taken from an actual case the Warrens worked on during their days as demonology experts,although skeptics are far from convinced the Warrens battled anything more than psychological demons.

Call it a faith-based horror movie, a notion the key players took seriously.

Father Steven Sanchez of Albuquerque, N.M., a friend of Lorraine Warren, blessed the production in front of the cast and crew at the Warner Bros. Studios lot in Burbank, Calif. He also used holy water and anointing oil to bless the set’s main rooms. 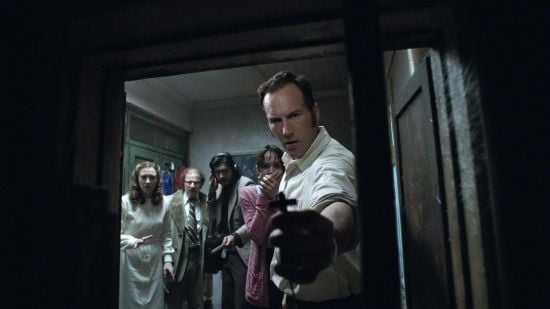 The action begins in 1977, a time when “The Amityville Horror” became a media sensation. The Warrens flew to northern London to help out the Hodgson family, the alleged target of the spirits showcased in the film.

The real-life nature of the production bloomed anew when Lorraine Warren was reunited with Janet and Margaret Hodgson after 38 years.

Suffice to say this isn’t a Freddy Krueger/Jason Voorhees horror film. In fact, the movie sports a PG:13 rating, a rarity in genre circles.

With “The Conjuring 2,” Hollywood hands Wilson another noble character to portray. The actor mesmerized with his work on “Fargo’s” second season. He played the no-nonsense cop, a bona fide Boy Scout keeping his head held high despite the wickedness all around him.

That runs counter to modern storytelling tropes. It’s all about the antiheroes, be it Walter White or Lucifer himself on the Fox drama. Even the newest version of Superman is less aw, shucks hero and more conflicted warrior.

“With Ed Warren, we didn’t have to make his character flawed,” Chad Hayes says. “It’s usually when you get to Superman losing all of his charm it means we’ve run out of stories and now we have to invent something uniquely different. With Ed and Lorraine, we have 27 case studies.”

It gives the screenwriting team plenty of fodder, as well as a strong angle to pursue for the film’s sequel.

“They were not going to get involved [in the case spotlighted in the movie]. Ed could never not get involved,” Chad Hayes says.

The real-life roots allowed the brothers to include themes in the horror yarn that other shock titles sometimes lack.

What it lacks are buckets of blood, swearing and sexual situations, the screenwriters note.

“The Conjuring 2” is still a horror movie down to its DNA, and audiences will jump more than a few times before it’s all over.

The brothers hail their director’s approach to the genre, but add they made sure the audience wouldn’t watch without a jolt or two.

“You have to have scares on the page,” Carey Hayes says.

The brothers worked with Wan to maximize the chills. Sometimes Wan would suggest showing … nothing at all.

“People’s brains will make something scarier [there],” Carey Hayes says. And then the cast does the rest. “If you have a good actor or actress they’ll convince you.”

Writing a horror move is like designing a roller coaster ride, they say.

“You know you’ll be safe, and then tick-tick tick … the anticipation is building slowly and slowly. Suddenly, you’re into your first jump scare. Then we have to calm you down again,” Carey Hayes says.

Wan employs a series of long shots along the way to amplify the chills.

“You’re almost piggybacking on what the character is doing,” Chad Hayes says.

The Hayes brothers hope to keep telling stories featuring the Warrens. They’re going to wait and see the box office results for “Conjuring 2” before getting too invested in the next Warrens tale.

They hint about bringing the couple’s daughter, who appears briefly in the new film, into sharper focus.

For now, they’re working on a number of projects like the independent film “The Crucifixion,” now in post-production. They’re also behind an A&E pilot based on the Long Island town of Amityville.

Plus, they’re prepping a third “Journey to the Center of the Earth” installment to star Dwayne Johnson.

FAST FACT: “The Conjuring 1 and 2” director James Wan says the original horror film “The Haunting” inspired him for the franchise’s tone.

For now, they’re content to know the real Lorraine Warren is a fan of both of their “Conjuring” film. That reaction matters to the screenwriters.

“They’re gonna be seeing the movie with friends and loved ones. They’ll know whether it’s truthful or not,” Carey Hayes says.

At “The Conjuring 2” premiere earlier this week, Lorraine Warren hugged the screenwriters, a repeat of what she did after screening the first film.

“Thanks for getting my Eddie right,” Chad Hayes recalls her saying.