I blame Abbott and Costello.

As a boy I spent Sunday mornings watching their black and white comedies with my Dad. This was before the Internet, mind you, so laughing at their peerless shtick proved as good as it got.

Those comedies did more than make me laugh. They were my gateway drug to Hollywood.

Years later, when my art career crashed on the runway, I suddenly had a Plan B. Become a movie critic.

Easier said than done, even at a time when newspapers considered critics an essential part of their staff. What self-respecting critic would give up that gig? And what did I have to offer beyond a lust for darkened theaters?

I ignored both inconvenient truths and went for it.

In a Steel City Frame of Mind

I joined a Pittsburgh newspaper as a metro reporter, filing reports from town meetings (noble work, just not my thing) and writing feature stories.

At the same time I volunteered for any entertainment assignment available. Opera reviews? Sign me up, even if my knowledge started and stopped with that 1957 Bugs Bunny short, “What’s Opera, Doc?” Plays featuring male nudity? Yup, I’m there, chief, just tell me the due date.

I was the original “Yes Man” before Jim Carrey co-opted the phrase. And it worked. Sort of.

When the paper’s veteran movie critic went on vacation I was the de facto backup. My first official movie review? Jeff Bridges and Ellen Barkin in 1995’s “Wild Bill.” I was elated, but vacations don’t last forever.

My career eventually took me to Virginia, and I found a similar gig at The Washington Times. Once again the paper had an established film scribe, perhaps the toughest critic I’ve ever read. He once gave a star and a half to a film that went on to win Best Picture.

And he wasn’t going anywhere. Nor was I.

I repeated my Pittsburgh polka, taking any entertainment task at hand. My bosses couldn’t turn down extra content, and I slowly proved my worth (and versatility). I didn’t pen any opera reviews, thank goodness, but I covered everything from Alabama concerts to Monkees’ profiles.

Eventually, I forced my way onto the entertainment desk and, later, began reviewing films on a regular basis. An overnight success story, no?

Politics rarely entered my mind during this period. Both the Pittsburgh paper and The Washington Times leaned to the right in their editorial content. That wasn’t necessarily my passion, though. I cared more about “Lethal Weapon” sequels than partisan theatrics.

The terrorist attacks woke me up in more ways than one. I drove past the Pentagon every morning, and when I arrived at work that awful day I saw colleagues huddled around the small TV sets that littered the newsroom.

I also witnessed how the Left, and Right, processed the attacks.

One side all but said we had it coming, raging against the very sight of an American flag in the ensuing weeks.
“Why do they hate us,” they cried. The other wanted justice. My political instincts rose from a long slumber.

I picked a side.

Politics didn’t weigh heavily on the entertainment scene at the time, though. Over the years it flared up, like the 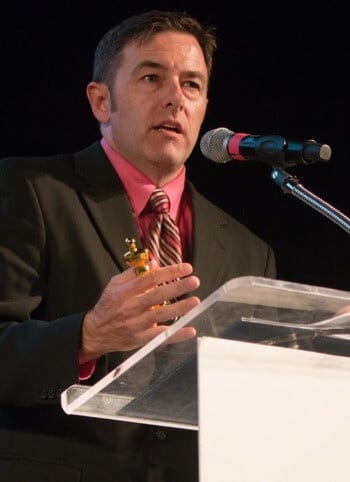 time Marlon Brando sent a Native American woman to pick up his Best Actor trophy on Oscar night. Years later, a flurry of films examined the Vietnam War and Watergate from a left-of-center perspective.

Still, reviewing movies was a thumbs up or down proposition thanks to the gig’s elder statesmen, Gene Siskel and Roger Ebert.

That slowly started to change.

Celebrities became increasingly political, and it reflected in some of their product. Consider the crush of anti-Iraq war movies flooding cineplexes during the Bush years.

The industry’s left-leaning ways grew stronger, louder, and it became an entertainment journalist’s job to cover that evolution. I took particular interest in how my peers framed these stories.

They often cheered liberal stars and stories on, or failed to ask actors tough but fair questions about their views. I silently stewed but kept on reviewing and reporting as best I could.

I eventually left D.C. for Denver, leaving The Washington Times behind. It remains the best gig I ever had.

Learn to Code … or Else

Meanwhile, the Internet’s rise left newspapers scrambling to evolve or die. Papers cut staff over and again, shrinking pages at an alarming rate. I couldn’t fall back on my three arts degrees, har-har, but I didn’t know what else to do

So I went solo, scrambling for freelance writing gigs and creating a web site to call my own.
WhatWouldTotoWatch.com.

Feel free to groan. In my defense I was new to the World Wide Web and wanted to leverage my goofy name. Only I didn’t fully embrace my conservative views on the site. I guess I wasn’t ready. I preferred to walk gingerly around politically-charged material. 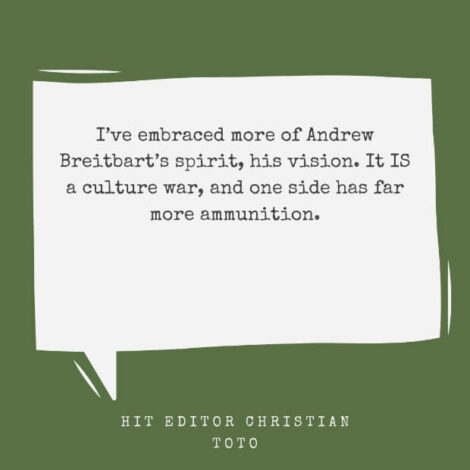 I also had next to zero marketing experience. Yes, I spent countless hours drawing naked people and learning how to sharpen pencils (really) in college. I didn’t jot a single note about how I could peddle my talents.

I read every blog post I could on social media, content marketing, branding and more. Later, I turned to podcasts to boost my education. Little by little, those lessons started sinking in.

Then Andrew Breitbart tapped me on the shoulder.

I spent two years contributing to Breitbart News’ entertainment section, putting my entrepreneurial journey aside. I learned plenty at the site and worked alongside some rising superstars, like Ben Shapiro. Still, I longed to cover Hollywood my way, on my terms.

So I left and created HollywoodInToto.com … I hope you’ve heard of it.

This time I put all my chips in. I’m a right wing film critic covering Hollywood from a conservative point of view. Full stop. No apology.

This site gives conservative artists eager for a little press a place to grab just that. More conservative outlets should do the same. End of micro-sermon.

I was officially out of the ideological closet, for better and worse.

The former? I learned there were thousands of readers eager to have their views reflected, finally, in entertainment coverage.

The latter? Not as bad as expected, to be blunt. I’ve had some interview subjects turn tail and run once they learned the site’s perspective. One subject spoke to a HiT contributor and, later, requested the story be yanked after discovering the site’s point of view.

Request denied. The writer in question worked his tail off to prep for, and conduct, the interview.

It’s hard to know what opportunities I’ve lost due to HiT’s politics, but for the most part I’ve been able to do my job without much interference. The perks? Free movies, of course, and the chance to tell Albert Brooks how much my family uses the words “nest” and “egg” together.

Some Overnight Successes Take Longer Than Others

Looking back, I forged my career path [mostly] on my own terms. It just took a long, long while to get there. Six years, to be exact.

I haven’t changed my approach over time, though. I still cheer quality films no matter their ideological leanings. I proudly point to my positive “Booksmart” review, one of the wokest movies to emerge from our social justice age.

What’s different now about me?

I’ve embraced more of Andrew Breitbart’s spirit, his vision. It IS a culture war, and one side has far more ammunition. I’m not looking for domination, though. Given the chilling clampdown on free speech I simply want all sides to be heard without, as Dave Rubin would say, being called a Nazi … and then punched.

Once upon a time that was the liberal’s default position. No longer. It’s time to act accordingly. Taking that basic stance makes me both an outlier and a culture warrior. Guilty as charged on both fronts.

If you’re a left-of-center movie buff, I hope you’ll stand by me, too. Let’s argue about the best, and worst, content streaming into our homes.

We can agree to disagree, assuming you acknowledge “Abbott & Costello Meet Frankenstein” got stiffed by the Academy in 1948.

Photo by y entonces on Foter.com / CC BY