“Saturday Night Live,” late night hosts and Comedy Central content stick to the media’s progressive narratives on a variety of topics, including:

That means their comedy is predictable, safe and, sadly, not as funny as it could and should be. Even Sacha Baron Cohen, once comedy’s outlaw king, pines for free speech restrictions while punching the preferred, predictable targets.

The following comics offers something different, vital even.

Some are unabashedly liberal. Others praise the GOP early and often. A third subset decry political labels entirely, embracing comic truths above all else.

These comedy rebels support free expression at a time when the media, Big Tech and other cultural powerhouses do the opposite. It’s why these comedians will be critical to the cultural conversation in 2022 and beyond.

The podcast superstar’s impact on the culture may dwarf everyone on this list.

We all know his curious career arc, from sitcom sidekick to podcasting icon. It’s how he’s doubled down on a core principle of his show’s early days, giving voice to those canceled by mainstream media forces, that matters.

It’s one thing for Rogan to yuk it up with conspiracy monger Alex Jones, unfairly removed from social media but of microscopic worth due to his wobbly facts. It’s something entirely different when Rogan welcomes scientists like Dr. Robert Malone on his Spotify program, allowing information to reach millions without the media’s censorial filters.

That, plus his eagerness to shred false media narratives from his apolitical perch, finds him atop the comedy heap.

He’s a gay comedy maverick who refuses to play the Victimhood Card. You won’t find his stand-up on Netflix or Hulu, and “Saturday Night Live” wouldn’t dare give him so much as a walk-on role.

Dillon still carved out a heady career via his stand-up material, podcast and YouTube presence.

The Long Island native may lean to the Right, but he’s disinterested in ideological labels and gleefully swats away Republicans when the need demands.

Best of all? “The Tim Dillon Show” is the most irreverent showcase since Howard Stern lost his mojo. Dillon’s comedy shtick is gleefully dark and absurd, supporting villains and crushing heroes if it’ll make his audience howl (it often does just that…). That kind of rogue persona hasn’t been seen since Stern’s salad days.

Boy, is it missed.

The self-made superstar sensed the woke tsunami coming years ago. It’s one reason he created his self-described “pirate ship,” a company letting him stare down his critics while creating art on his terms.

Carolla’s greatest impact on 2021, though, came via “The Adam and Dr. Drew Show.” Carolla, re-teamed with his “Loveline” partner Dr. Drew Pinsky, served up sane, sober COVID-19 information while slicing through the press’ lies on the pandemic.

Carolla did it with an Everyman’s touch, finding humor in the absurd.

There’s something about leaving “Saturday Night Live” that makes cast members reassess their world views. We saw Dennis Miller shift to the Right after his iconic work on the NBC show. Jon Lovitz and Jim Breuer followed a similar arc.

Count Schneider as the latest alum to grasp the foul forces swarming the culture.

The tide has turned.
The scurrying for cover has begun.

Americans love their Freedom.
Freedom isn’t negotiable.
Freedom is not ‘given’ by government.
Freedom is an inalienable right given by God.

Few comedians are as focused, and forceful, as “Deuce Bigalow” when it comes to free expression.

She’s a new kind of right-leaning voice, a big tent type for those who embrace free speech in all forms.

She’s also funny and fierce, standing up to vaccine mandates knowing it’ll cost her plenty, and not just with lost stand-up gigs. Some of her fellow comics target her on social media, demanding she play by their rules and stop it with her Right-leaning ways.

The “After Life” star is as progressive as his comedy peers, but he doesn’t let that define him. Nor is he willing to pull satirical punches if he has the “wrong” targets in his sights.

Gervais and Carolla have been fighting the woke mob for years, even if they have little else in common. Gervais, also known for Netflix specials like “Humanity,” understands how vital free expression, the kind without a comedy rulebook, is to his art. It’s why he’s so forceful on the issue, and why many on the Left would love to see him stand down.

Conservatives rallied behind the British comic after his withering 2020 Golden Globes monologue where he decimated Hollywood activism. No one has delivered an awards monologue as funny, or biting, since.

It takes a comedy icon to understand what we’re losing to the woke mob. 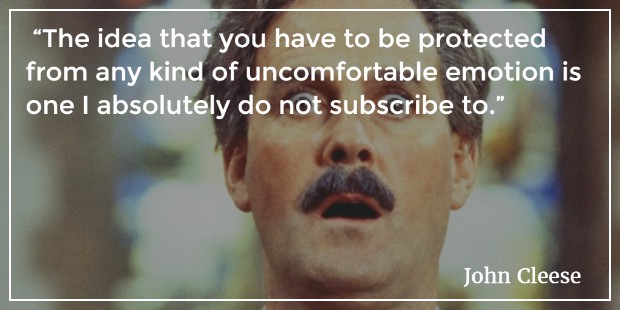 Like Gervais, Cleese is reliably liberal on the political front. When it comes to comedy, and who knows more on the subject than the silly walks inventor, Cleese is a one-man army against censorship. He refuses to stay quiet about the toxic forces trying to shutter free expression.

The versatile mimic knows firsthand what happens when you anger Big Tech, Inc. It hasn’t stopped him from co-starring in the upcoming Daily Wire western “Terror on the Prairie.” Nor did it prevent him from speaking out against vaccine mandates, the kind that ignore natural immunity as well as the vaccine’s limitations.

Everyone trying to get in the club on #NewYearsEve pic.twitter.com/lCFsbWItMP

He’s already shown a willingness to stand tall against comedy groupthink. It’s one reason Fischer’s star may rise faster than expected in 2022.

He’s the YouTube cutup who started as a faux spiritual seeker and now slams government overreach. His tone is soft, even soothing, but that’s how he gets his nose under the cultural tent.

Don’t be fooled by his earnest grin. He’s savage when it comes to anyone trying to fool citizens into giving up their freedom.

How Liberal Mayors Run Their Cities!

He’s a one-man army fighting back against bureaucrats.

The Canadian comic may seem like a conservative in disguise, but he’s aggressively apolitical when it counts. That’s behind the stand-up mic or when he’s crafting one of his killer weekly videos.

Long’s comedy instincts are easy to explain. If everyone else is doing Trump jokes (still), that’s the last kind of gag he wants to tell. He’s a contrarian at heart, which explains his meteoric ascension.

The versatile comic smashes the woke bylaws on a regular basis, from their quasi-racist instincts to how crazed their ardent supporters tend to be.

The result? His “Boyscast” show is a weekly smart bomb of irreverent jokes and commentary, and his sketches are everything “SNL” skits aren’t … at a fraction of the cost.

He’s arguably the best stand-up comic of his generation, a fountain of blistering gags and bold insights. No one stalks the stage quite like Chappelle, and he’s eager to challenge audiences and detractors alike with his routines.

He’s also become a symbol of woke outrage, stirring the pot with jokes tied to the trans community. Most hear those routines and see the humanity, and heart, lurking behind every punch lines.

Others see nothing of the kind.

What’s undeniable? He’s blazing a trail for other brave comics to follow, willing to enduring the media’s relentless assault along the way.

The former “Opie and Anthony” star toiled in the shadow of radio’s “King of All Media,” Howard Stern, for years. That doesn’t diminish Cumia’s staggering accomplishments, including game-changing shows on both satellite and terrestrial radio.

It just acknowledges how large Stern loomed over the radio landscape in his heyday.

Today, Stern is a caricature of his former self, cozying up to media elites and embracing narratives he once would disembowel with glee.

The former radio star never lost his hunger to test media boundaries. He did more than stay true to his comic spirit while Stern betrayed his legacy, though. He created his own free speech empire with Compound Media, inviting other freedom-friendly comics to work without a net.

Steven Crowder is one of the bravest comedians around … change my mind.

The fast-talking podcaster is constantly challenging media narratives, and he risks his massive YouTube empire along the way.

He’s been suspended multiple times by the censorial platform, and at some point he may stop making revenue from YouTube entirely.

It’s why he created the subscription-based Mug Club society. It also explains why he has his own Rumble channel, as a buffer against future YouTube strikes.

Oh, and he boasts a wit as speedy as his mouth, and one willing to summon critical facts to back up his satirical slams.

The “Hellbent Southern Gent” spends most of his days in Facebook jail, punished for throwing sharp elbows against the Left. In between, he cuts wacky videos featuring Liberal Larry and Tucker the Trucker, poking fun at squishy progressives and MAGA fans alike.

He’s been on the stand-up circuit for decades, and his material blends keen observations with a nod toward the culture wars.

He knows his unabashedly conservative views will keep some jobs permanently out of reach, but he’s not willing to compromise his God-given right to speak his mind.

You can’t cancel Denny. He’s already been cast out of polite comic society, and he has no intention of apologizing his way back into mainstream acceptance. His brand is tough and uncompromising, be it on his podcasts or blistering social media feeds.