Chris Holly was too busy living the rock star life in the ‘80s to get political.

Long hair metal beckoned, and the young Holly eagerly obliged. That was then, before marriage and fatherhood transformed him.

Now, as a parent and business man, he’s able to fuse his talent with his conservative views.

“There’s no competition in my marketplace … it’s me and Kid Rock, and that’s about it,” he says. “Even the country artists stay out of it a little bit.”

That helped boost one of his newest singles, the Trump-friendly rocker “American Dream,” to more than 260,000 views on YouTube.

It isn’t just conservatives rallying to his side. Holly says his longtime music chums may not agree with his views, but they don’t treat him any differently because of them.

“I have a ton of dear friends on the West Coast … they’re all way, way, way left,” he says. “They’re very respectful toward me. They’ve never ‘de-friended’ me on social media. We’re friends first and foremost.”

He’s not above a gentlemanly debate about, say, ObamaCare, because he wants to hear the other side. 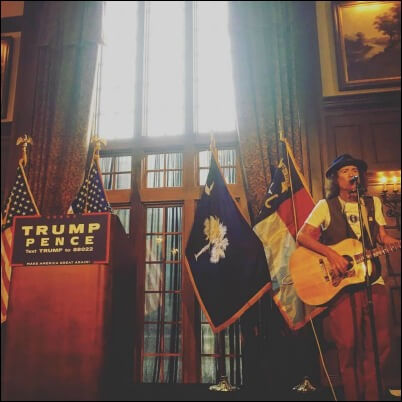 “I’ll listen to anybody. I’m very curious,” he says.

Holly’s political rebirth came naturally, even if it took a while to flourish. He remembers his conservative father’s words of wisdom, as well as the older man’s frustration over union-based shenanigans.

Holly also grew up in the red state of Alabama. So when he left home for Hollywood to become a musician he didn’t adopt the city’s hard-left views.

“I’ve always been on the conservative side. I never went through a [liberal] phase where I thought, ‘you gotta vote for Gov. Brown,;” he says. “I saw through all that even then.”

He looks back at his time touring the globe as a long-haired rocker without regret.

Time passed. He started to grow beyond metal rock and opened up to singer-songwriters like Bob Dylan and Bruce Springsteen.

He even cut his hair.

His fellow rockers were aghast. Holly knew it was time for a change, especially as the grunge movement stampeded over ‘80s rock darlings.

Today, he’s still making music, but he splits time with his family and South Carolina music store. Touring is mostly in the past, at least for now.

Over the years he lived the rock star life … for better and worse.

The latter came with a “Spinal Tap kind of situation,” he recalls. He was part of a Canadian tour in Vancouver when his band’s lead singer had a “full meltdown” on stage.

“They basically escorted us out of the country,” he says. “It was a total nightmare scenario. Everything you think happens with hard rock bands happened that night, but not in a fun way.”

“I can go back there now,” Holly notes of our neighbors to the north.

Yet Holly can look fondly back at other nights, like when the crowd sang him Happy Birthday during a Las Vegas New Year’s Eve concert a decade ago.

These days, his South Carolina music school lets him groom the next generation of singing stars. The school, located in the same S.C. location for the past 18 years, lets him produce new acts while guiding others to potential fame.

He expects his political activism to subside now that the presidential battle is over at last. The singer/songwriter doesn’t have any plans to returning to L.A., either.  And that’s a good thing given his ideology.

“If I move back to L.A. and was working again in L.A. it would definitely hurt [my career] … phone calls wouldn’t be returned,” he says.