“All our kids are dying out here on these streets.”

These are the words of Nathan Wallace, a father in Chicago grieving the death of his 7-year-old daughter, Natalia, in July. His words hit hard for many facing similar tragedies:

“We should be able to do something as a people, as a community, to come together and strategize and think of something that’s a lot better than what’s going on now.”

A few months prior, a horrible video circulated of Minneapolis police holding a black man in a chokehold for eight minutes. His death sparked national protests and riots in several major cities, including Chicago. Around the world, people would say his name: George Floyd.

In July, the same month Mr. Wallace lost his daughter, a 9-year-old black boy, Janari Ricks, was shot and killed in a Chicago parking lot, a victim of gang violence.

In the two weeks before, nine children under age 18, mostly black, were also murdered in Chicago, including Sincere Gaston and Mekhi James. At least two more children were shot and killed in an act of gang violence in the months to follow: Dajore Wilson and Lena Nunez Anaya.

There were zero major protests. Who says their names?

Reading about these atrocities has highlighted the importance of Mr. Wallace’s words: we must do something to prevent these kids and others from dying. And getting people to talk about it is the first step.

More people every year get their news from the pop culture they consume: movies, books, and social media, to name a few. Recent studies have shown that almost half of Americans prefer to watch news over reading or listening to it, emphasizing the power of visual media.

Hollywood greenlights a film about systemic racism or police brutality every 5 minutes and pretends to give voice to the powerless. Yet it’s rare to see an original Hollywood film tackling the violence ripping apart black communities and families in Chicago.

Movies are powerful tools in shaping our opinions, attitudes and even lives. I’ve spent the last two years writing a screenplay, “Chicago Father,” in large part to shine some light on the terrible reality facing so many parents today.

Given the importance of visual media, I made a proof-of-concept trailer for “Chicago Father,” shown below.

“Chicago Father” is about a father grieving the loss of his son in violence-ridden Chicago. This idea came to me when I stumbled upon a video of a weeping father begging the media to talk about his son who had just been murdered by a gang member, pleading for someone to care about the problems plaguing his community.

Year after year, why is there so little media interest in murders of black youth in Chicago and elsewhere?

The word “news” directly implies newly received and out of the ordinary. What is happening in Chicago is common and thus easily ignored. But how can daily killings of young people not be newsworthy?

A quote from the Joker in “The Dark Knight” sums it up best.

“If, tomorrow, I tell the press that, like, a gang banger will get shot, or a truckload of soldiers will be blown up, nobody panics, because it’s all part of the plan.”

I suppose then, that we should add the carnage in Chicago to the list of things that are all “part of the plan.”

Beyond media malfeasance, American culture is also to blame. According to pop culture, what happened to Floyd was not just terrible, but also racist. When books, music, and movies all scream that America is bigoted and rotten to the core, it’s clear why people go and march against the invisible force of systemic racism, while the exorbitant homicide rates in Chicago are ignored.

There are no movies about Natalia Wallace or the other murdered children, let alone the never-ending grief their families face.

For a film to shift culture and possibly change opinions, it must linger on the audiences’ minds long after the credits roll. To achieve this, it first has to be good.

“Chicago Father” offers an exploration of an unnamed father’s grief as he deals with the death of his son. No parent should have to experience this awful tragedy, but the unnamed Father represents the many parents who have lost a child. While writing this screenplay, I took inspiration from my own father whose son died.

Another key theme in “Chicago Father” is the importance of paternal role models in young men’s lives, centered on the idea that everything starts at home. Fatherlessness is plaguing many communities in inner cities, and President Barack Obama said it best: “We need fathers to realize that responsibility does not end at conception.” 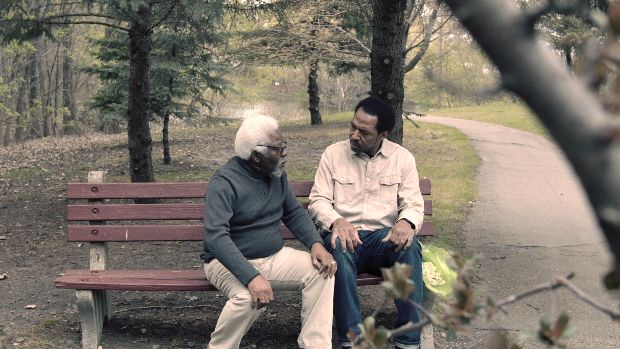 Besides its dramatic core, “Chicago Father” is also a thriller that will immediately captivate an audience. The father finds and kidnaps the man responsible for his son’s murder, and interrogates him to find out what happened that night. This film shows the darkness taking over a good man and the evil things he’s driven to do.

I worked with some amazing people who helped me make this trailer. Kelechi Jaavaid, a Minneapolis comedian, does a wonderful job as the titular unnamed Father, and Lee Evans plays the antagonist. I had fascinating conversations with Kelechi, who previously worked as a school teacher. Our discussions on public education and his relationship with his own father helped tremendously in bringing this story together.

My screenplay tells a powerful and emotional story that I believe can open eyes and change minds -- vital qualities that, when adapted to film, will inspire change.

Jonathan Oster is a video production specialist from Minneapolis, Minn. Jonathan is currently submitting his screenplay “Chicago Father” to producers around the country in pursuit of a green light. His film portfolio and previous works can be found on his website. If you or someone you know is interested in funding “Chicago Father,” please contact Jonathan directly.