Carrot Top has been one of the most distinctive comedy performers for the past 30 years.

He’s a nonstop bundle of energy as he tears through trunkloads of props en route to delivering 300 punchlines per hour.

Yet despite his trademark orange hair, he’s also surprisingly quiet and thoughtful offstage. The erstwhile Scott Thompson is a student of comedy who’s deeply appreciative of the life he’s been able to build over 25 years as one of Vegas’ top acts.

Playing more than 200 dates a year at the Luxor Hotel and Casino in Las Vegas, Carrot Top has honed his comic assault to appeal to audiences around the globe. He also tours several weeks each year, leaving audiences laughing — while often feeling ashamed of themselves for doing so.

“The funniest thing is, people ask, ‘How do you have the energy?’ ” says Thompson, as he prepares tea for himself in his impressive backstage man cave. “That’s the easiest part. You have the music pumped up, people laughing, you can’t wait to get on stage. Unless you’re really sick. If they can’t hear you well, it’s a drag for everyone. My biggest challenge is handling the dry air of Vegas and keeping my voice going. If I ever cancel, it’s because I can’t talk.”

Thompson bursts onstage to amped-up rock classics and whips through dozens of props within the first few minutes as extra sight gags flash by on the screen in rapid-fire fashion. He also employs a trick he learned from watching Johnny Carson: playing off a stageside wall throughout the show as if he’s making comments to an unseen audience member.

RELATED: Why Chris Pratt Must Stand Up to the PC Scolds

“I got my first gig here while doing [Live With] Regis and Kathie Lee in 1992, where I did really well in my first time there,” recalls Thompson. “I was in the green room, and Kathie Lee’s manager asked if I would do a Vegas gig if he got me one. He got me in Bally’s. I did well, and the next week I was on the main stage there.”

“There were hundreds of feet of stage; it was like a football field they had to fill,” he continues. “I went to Walmart and bought tables, tapestries and home stuff just to fill the space so it shrunk and wasn’t overwhelming. MGM Casino got me for 10 years after that, and here at the Luxor we’re at 13 years.”

Thompson hated adapting to the Vegas showroom protocols at first. It meant having to teach himself how to work the room and contend with college kids yelling for him to do more pot jokes.

But he notes that “Vegas made me feel like an adult, because I’m playing to savvy people from all over, and that teaches you that you can play anywhere ’cause they’re from all over the world and in all different moods,” he says. 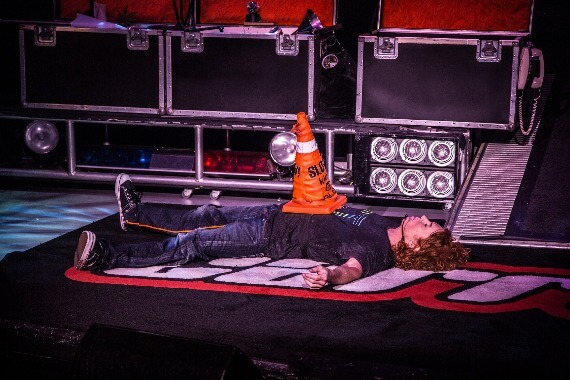 Carrot Top’s propensity for props has made him one of Las Vegas’ most enduring performers. It also keeps him out of trouble with the PC police.

Some of the unexpected aspects of Vegas audiences include hearing Midwesterners gasp over his occasionally saying “f***” onstage. He doesn’t have as much concern about offending PC audiences as many of his comedic contemporaries, who are suffering through millennial meltdowns over their jokes at colleges nationwide.

“You learn the lines of how much you can get away with,” he notes. “You pick on everybody, riff on everybody: gay people, Asians, everybody. It’s f***ing comedy. I don’t worry about PC complaints because I don’t push it that far. When I played colleges it was not a concern to be PC, but now it’s like ‘Oh Jesus,’ when I hear these stories, so I move so fast it’s on to something else.”

My biggest challenge is handling the dry air of Vegas and keeping my voice going.

Thompson, 53, is contracted to appear at the Luxor through 2020 and hopes to keep performing until he’s at least 60. He works out his joke-writing muscles on a daily basis, trying to constantly add new jokes and props to his sets.

He knows he needs to evolve his show to an almost entirely new hour of material annually in order to appease his many repeat customers. He learned to do that from his good friend Chris Rock, and it’s even more impressive to consider that the new material drops perfectly into the middle of his older material.

Considering that he’s been studying comedy since he was a child in Florida, growing up as the son of a NASA engineer who helped design the lunar vehicle driven on the moon’s surface, the art form is infused in every level of his mind, body and spirit.

“I drew my logo in my college dorm room before I even became a comedian,” says Thompson. “My roommate said, ‘But you don’t have an act.’ I was a marketing major, so I was always thinking of the bigger picture.

“I started going to open mikes at a club in West Palm Beach, just telling jokes I liked from other comedians and slowly telling my own jokes about life in a dorm. The club booker asked me if I could broaden my material so her audiences could relate, and I brought in a Neighborhood Watch sign I stole and joked that they must not be doing a good job. I also had a stolen street sign that said ‘Butts Road’ and said, ‘This must be where the assholes live.’ Those got big laughs and I realized the direction I had to go.”

FAST FACT: Carrot Top doesn’t mind that other comedians poke fun at his prop-heavy shtick: “It’s when they stop talking about you that you have to worry,” he once told The Onion.

Thompson realized that if 20 props got him through a 15-minute opening-act set, designing 40 props would make him a feature. He threw himself into an inventive rush, and soon was headlining with thousands of props at his disposal. He now keeps them all in a giant warehouse he owns near the Las Vegas Strip.

“I’m having more fun than I did at 30,” says Thompson. “Not that I didn’t appreciate it when I was younger, but I feel it more now, that people still come out and I get to do this. You take it for granted when you’re young, then you get older and realize I have so many friends who’d love to have a show. It’s fun and I get to feed off the crowd, and it’s a really cool thing to get to do this for a living.”

You can hear the entire conversation with Carrot Top at the official Kozversations podcast.

Listen to “THE KING OF VEGAS (AND PROP!) COMEDY – CARROT TOP!” on Spreaker. 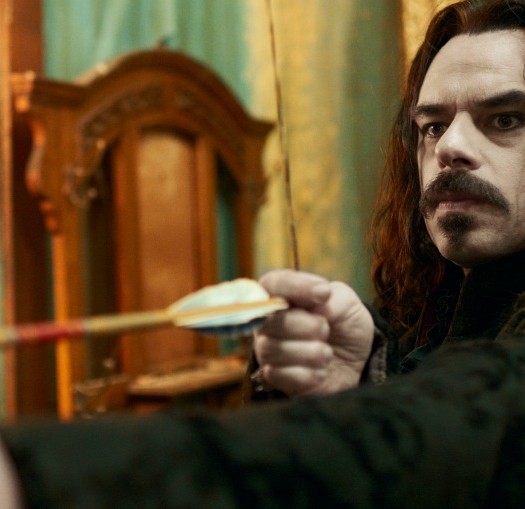 HiT Movie Review: ‘What We Do in the Shadows’

Read More
HiT Movie Review: ‘What We Do in the Shadows’ 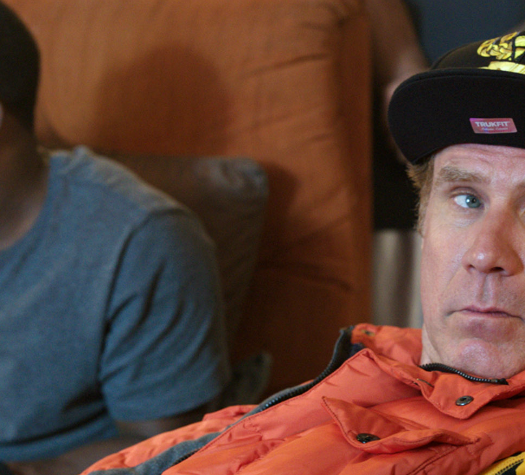 Will Auds Get ‘Get Hard’s’ Racial Humor … or Revolt...

Read More
Will Auds Get ‘Get Hard’s’ Racial Humor … or Revolt?