The podcaster knows the dangers from being infected with CO-VID19. He’s just not buying into the fear-mongering from the press and government officials. The same press and government, by the way, which alternately tells us it’s safer to go outside but demands we don masks outdoors for fear of “Invasion of the Body Snatchers” style blowblack.

Together, they railed against mainstream media outlets cherry picking the worst of the worst information about the pandemic on their May 24 podcast.

RELATED: Adam Carolla on PC Police – ‘You Retreat, They Encroach’

Carolla calls it the “indoctrination into fear,” and it’s manifesting itself in ways that surprise him.

“It seems weird to able to indoctrinate 54-year-olds … you figure once you get to 35 you couldn’t join a cult,” Carolla said. “If you don’t start smoking by 17 you’re not gonna be a smoker… the idea that we have a bunch of 55-year-old new cult members is pretty fascinating to me.” 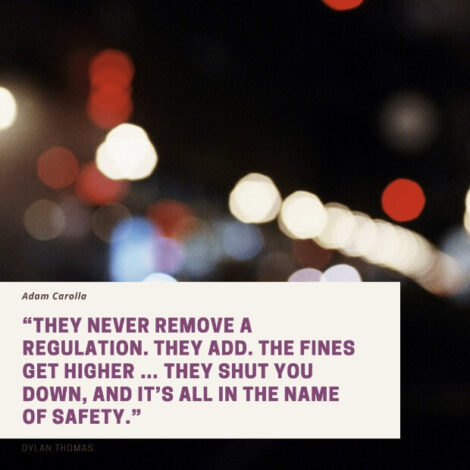 While some wonder if children are missing out on critical school lessons, Carolla noted what’s more egregious with the current lockdown.

“They are missing the most dangerous, insidious part of kids being locked down, an indoctrination into fear,” he said. “You’re brought into a fear cult, and guess who runs the fear cult? The government.”

“And the press,” Dr. Pinsky added.

“You’re going to be a loyal subject,” Carolla continued. “My daughter is locked into her fear cult .. and she has to turn to the government … they have to tell us when it’s OK.”

RELATED: Carolla: Why ‘Safe Spaces’ Will Backfire on the Left

Dr. Pinsky noted a potential upside to the disturbing trend.

“When that has happened in the past, we’ve over stated the risk of fill-in-the-blank – pot, HIV – there’s been a marked backlash the other way, and a lack of trust, or a listening to, the fear cult leaders any more,” Dr. Pinsky said.

Carolla, unofficial King of the Metaphor, compared the current situation to the Department of Building and Safety. That body pushes “incremental rules in the name of safety.”

“There’s no pumping the brakes, they never slow down,” he said of their approach. “They never remove a regulation. They add. The fines get higher … they shut you down, and it’s all in the name of safety.”

In California we have a flag that says “Please Tread on Me.” It’s a cockroach about to be crushed by Gavin Newsom’s boot.

Carolla spread the blame around, though.

It’s up to fellow Americans to rise up and reclaim our liberty. So far, that’s not happening enough to his liking.

“The insidious part of this whole thing is not the government. The government is doing what they were put here to do, to rule you. make more regulations for you,” he said. “[California Governor] Gavin Newsom is doing what he does .. they didn’t get elected not to rule. They got elected to tell you what to do.

“The news? F*** the news, they’re just there to scare you and get more clicks. I get it,” he said. “Who are you? Why don’t you know what’s going on and, better yet, why are you joining them in shaming others that are attempting to exercise some liberty?”

What we’re seeing, the pair agreement, is an increasing reliance on government.

“It’s a cult,” Carolla said. “We’re gonna extend the lunch and dinner programs through the summer … the government is feeding your kid and the government locking them down, they f***ing own them,” he said. “You guys better start thinking about that and stop f***ing feeding into it.”