“The Big Bang Theory’s” Melissa Rauch gives us an indelible anti-heroine, but like too many black comedies “The Bronze” can’t stick the landing.

Rauch’s Hope reigns over her small Ohio hometown. snarfing up free food and other perks from her Olympic heyday.

She’s broke all the same and thinks the town, and her harried dad (Gary Cole), still owe her plenty. The death of her former gymnastics coach offers the chance to turn her life around. She’d rather keep accepting free meals, but a clause in the coach’s will says she’ll earn a cool $500,000 if she trains a local phenom (Haley Lu Richardson).

Even Hope can’t resist that prize, so she begrudgingly accepts the gig.

What follows, of course, shows us Hope’s softer side along with more potty-mouthed riffs than any movie save “Deadpool.”

And here’s where the problem starts.

For all its R-rated theatrics, “Deadpool’s” one-liners killed. Only a third of Rauch’s put-downs do the same. Some are crude for the sake of being outrageous, lending the film a desperate air.

Rauch deserves some blame since she co-wrote the script, but her Hope is a fully-realized creation all the same. Everything about her is fresh and vital, from her aggressive bangs to the way she struts around a gymnasium as if invisible crowds should cheer her every step.

In a better movie she might become a cult character for the ages.

FAST FACT: Melissa Rauch once starred in the one-woman show “The Miss Education of Jenna Bush,” a fictional look at the president’s daughter.

The best black comedies smash our faces in the muck but have other plans for us, too. In “The Bronze,” Hope’s belated hometown love feels forced, and it’s hard to buy the film’s romantic subplot which takes up serious screen time.

Even a sex scene that will be name-checked for some time feels more calculated than cohesive to the story. 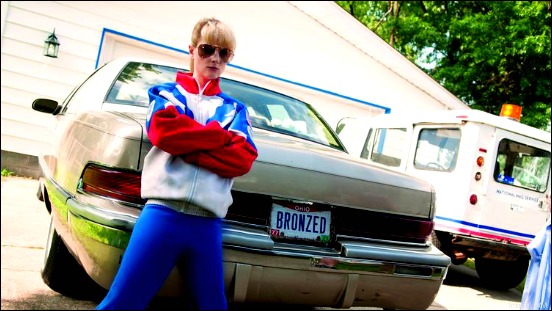 You know there’ll be a point where a flicker of humanity overcomes Hope. But that transition is awkwardly handled.

The bond between Hope and her aw, shucks protege isn’t given much attention. At first Maggie accepts Hope’s insults, thinking she’s just being funny. That’s the Christian goodness in her, a potential running gag that also doesn’t pay dividends.

“The Bronze” is like that, a grand idea that works better on paper than on the big screen.