She’s a yoga instructor who values inner peace over empty calories. So when she learns she has a half-sister hounded by a violent beau, it’s only natural she’ll run to her side.

Where “Bleeding Heart” surprises is both in its journey and how the main characters react to the dangers awaiting them. The former ends where you expect, but the latter offers nuances that make this indie more than a pat plea for peace.

Bleeding Heart - Trailer
Biel stars as May, a yoga teacher with nary a first-world problem on her mind. She’s knee-deep in her yoga business and spends her free time with her sensitive boyfriend (Edi Gathegi).

So when she discovers a half-sister living near her home she decides to set up a meeting. What could go wrong? Turns out Shiva (“Girls” star Zosia Mamet) is living a very different life from her pampered sis. She has money woes, curses with alacrity and clings to an abusive boyfriend (Joe Anderson).

Her Facebook status should read, “in a relationship … but be ready to dial 911 for me.” Shiva’s domineering partner is so foul he forces Shiva to turn tricks to help pay their bills. 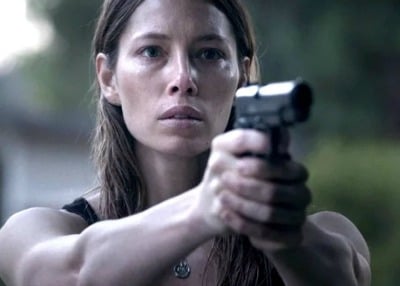 What’s a gluten-free yoga instructor to do?

“Bleeding Heart” sets up its characters as bland archetypes, and yet both Biel and Mamet refuse to play by the rules. May isn’t just strong from all those Downward Facing Dog poses. She’s tough enough to stare Shiva’s boyfriend down. Does she realize how things could escalate for both herself and Shiva?

Shiva, in turn, is a victim with a stronger sense of self-preservation than we expect. Together, the women scope out a possible future where they both have a chance at happiness.

For all its progressive trappings, “Bleeding Heart” offers a conservative moral or two. May’s sense of despair isn’t going away, and it’s soon clear that neither is Shiva’s boyfriend. Writer/director Diane Bell (“Obselidia” ) conjures a thoroughly modern setting but there’s a hint of the old west in where the story inevitably must go.

Biel’s career hasn’t evolved despite a series of high-profile projects, from supposedly commercial catnip like “The A-Team” to more respectable fare like “The Illusionist.” Here, her lean frame is more than enough to make the yoga scenes convincing, but her rigid sense of right and wrong is equally on target.

Mamet is just as committed, lending Shiva a world view shaped by, but not handcuffed too, disappointment.