Create powerful, original art? Check. He’s an award-winning author and screenwriter, not to mention the mind behind the binge-worthy “Another Kingdom” podcast (also available in novel form, like the saga’s second book, “The Nightmare Feast”)

Another Kingdom Is Now A Book!

Fight back against progressive messaging? Check. His Daily Wire podcast does just that, Tickety Boo style.

Use humor to defang his ideological opponents? Check and double check.

So HiT reached out to Klavan for his thoughts on the culture wars, the 2020 presidential campaign and what fellow conservatives need to gain ground in the arts.

HiT: Some writers proudly cling to their yellow lined notepads in our digital age. Not you. You’ve embraced storytelling via film, apps (“Haunting Melissa“) and now podcasts (“Another Kingdom“). Has switching platforms impacted your storytelling chops in any way, and how?

Klavan: Alfred Hitchcock had a big influence on me, and he was always the first guy to use some new development in a creative way: sound, color, slackening censorship. He didn’t just use it, he worked with it. I love writing prose and when I started out, novelists were the top of the creative food chain. Who would be the next Hemingway and so on.

The novel reaches fewer people now, very few young people. But at the same time, these new technologies have come along. I’d be crazy not to use them. Plus, it forces me to examine what my strengths are, which will make the transition, which not. I preach this kind of creative flexibility to other artists, so yeah, I want to practice it myself.

HiT: We’re living in a Binge World, where audiences demand an entire season of a show right this very minute. Did you have any initial worries that “Another Kingdom” might frustrate viewers? Do you think this kind of staggered storytelling may return despite our binge appetites?

Klavan: It really depends on the project. With “Haunting Melissa,” we had this really clever system where the story would appear at random and your iPad would alert you by whispering, “Melisssssa,” in this very creepy way. It was great, but it didn’t work. Bingeing was all the rage. 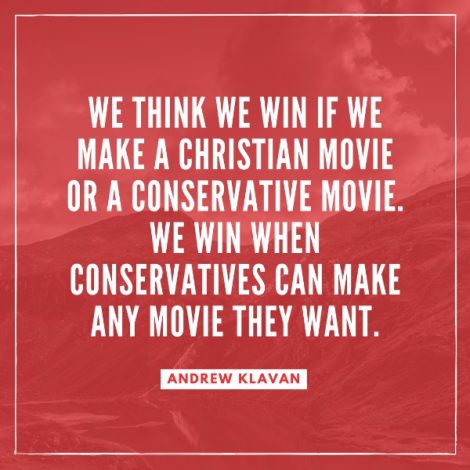 I think “Another Kingdom” was successful because we gave people what they could naturally handle at a given moment and they were willing to wait for the next installment. It’s just one of those million things you have to gauge and hope for the best.

HiT: You’ve worked on an off in Hollywood over the years. What can you share about those experiences that we might not suspect, or is it more oppressive than we even realize for openly conservative talent?

Klavan: I think the most important thing to understand is that it’s not monolithic but it is communal. That is, there are lots of great individuals in the business doing good work, but the pressure from the left is constant, purposeful and targeted and because it’s a small community of people who know one another, that sort of peer pressure works, just like in high school.

The upshot is: you don’t get blacklisted for doing conservative movies or Christian movies — you can find supporters for that if only in the indie world. You get blacklisted for having wrongthink opinions, for voting for Trump (I did) or thinking gays are uniquely sinful (I don’t) or that socialism is a moral atrocity (I so do). The right doesn’t get this.

We think we win if we make a Christian movie or a conservative movie. We win when conservatives can make any movie they want.

HiT: Conservatives often share horror stories about their connection to the liberal entertainment world, and for good reasons. Do you have a positive anecdote to share, a time when someone put aside his or her politics and embraced your work or that of a right-leaning colleague?

Klavan: No. From that angle, things have only gotten worse.

HiT: You’ve been advising fellow conservatives for some time about the culture — how to fight back, how to engage it, etc. Have you changed your mind on any of those fronts – advice you gave out a decade ago, for example, but wouldn’t share now … and why?

Klavan: Well, I haven’t changed my mind. That would suggest that I’d been wrong at some point, and that never happens in real life. But the landscape has changed.

When I started banging this drum, there was no conservative culture at all to speak of. I told artists — stop complaining about Hollywood and then begging Hollywood to buy your screenplay. Use the new media. Put stuff on YouTube. Publish books on Amazon.

This is a revolution against an empire. You’ve got to fight a guerrilla war.

I very much doubt anyone was listening to me, but all that started to happen anyway. “Another Kingdom,” The Babylon Bee, Steven Crowder on the Blaze, the “Gosnell” movie. These are all the sorts of things I wanted to see happen. What we need now is money. Lots of money.

To start production companies, publishing companies, build venues and infrastructure — review sites like HollywoodinToto and awards and so on. If we do it, we’ll transform the country.

If not, Cancel Culture will win the day.

HiT: Hollywood is currently divided on who should square off against President Trump… but the industry will rally around the eventual nominee most likely. What do you see as Hollywood’s messaging in the months to come re: the election? Will it be more like 2016 – PSAs, tweets, etc? Or something new?

Klavan: The arts are actually not a very good tool for direct political messaging. What culture does is create an atmosphere, a narrative — all the things you think are true without thinking about them and which oftentimes aren’t true at all:

Maybe some of this stuff is true or has truth to it, but the point is to never let a conflicting idea hold sway so that everyone will be afraid to question, everyone will think they’re the only person who disagrees or only the bad people disagree.

If some idiot socialist wins it won’t be because Brad Pitt made a PSA, it’ll be because we’ve been swimming in this toxic stuff for more than 50 years.

HiT: Are you reading anything intriguing of late that you’d like to share … or seeing anything on the streaming landscape that you highly recommend?

Klavan: I recently reread “Man’s Search for Meaning” by Viktor Frankl. I hadn’t read it since I was in high school. It blew me away. I hadn’t remembered how great and essential it is.

I thought last year was a particularly good one for movies and especially liked “Once Upon a Time in Hollywood,” clearly the best film of the year by a long chalk. Also, I don’t think people are paying enough attention to “The Sinner” on USA.

It’s a really interesting take on detective stories with Bill Pullman giving this great performance as the most neurotic detective on earth.

On the non-fiction front, everyone should read “Dominion,” historian Tom Holland’s book on how Christianity changed the world. In England, where he’s from, they made him take Christianity out of the title, which tells you why you should read the book.