Randy Newman famously “loves” L.A, albeit with tongue partially planted in cheek. Andrew Heaton? Not so much.

The fiercely funny comic turned his time there into a book brimming with sour stanzas. “Los Angeles Is Hideous” is pure Heaton – sharp, whimsical and smarter than your average tome. It’s also perfectly timed to the city’s public collapse, along with high-profile locals like Joe Rogan fleeing for friendlier climes (Austin, to be precise).

HiT reached out to Heaton to learn more about the book and how his humor avoids the woke mob.

HiT: You’ve grabbed the zeitgeist by the throat with “Los Angeles Is Hideous: Poems About an Ugly City” — tent cities, recall elections and more. How long has this project been brewing, and was there a specific spark behind it?

Andrew Heaton: “Los Angeles is Hideous” started properly about a month before I fled the city, with plans for a book. But I started keeping notes the week I moved there. I was out apartment hunting, and kept walking through sun-bleached neighborhoods apparently made out of rusty washing machines and bathroom tiling grout.

I thought my faux poetic take on the ugliness of the city was actually pretty funny, so I started jotting down notes.

HiT: You’ve lived in several cities in recent years, but this feels like someone who has walked the L.A. beat for enough time to satirize it thoroughly. How long have you spent in L.A., and would you ever go back under any circumstances?

Heaton: I lived in Los Angeles twice, both times for about six months. The first time was a year or two out of college, when I lived in a tool shed behind my best friend’s house and worked as a background actor.

The second time, most recently, was an attempt to go to L.A. to forge some networking (didn’t realize the pandemic would knock that plan silly). I would go back to Los Angeles if I were offered some kind of dream job on a silver platter–hosting a late night show, or a travel show. But I would not return to the city to “make a go of it” under any circumstance.

HiT: L.A. is overripe for ridicule, but it’s not a comedy narrative we often see or hear. Do you know of other comedians who frequently riff on the city, and does their commentary overlap with themes in the new book (beyond Patton Oswalt’s observation that LA is ” is five of the best cities in the country, and three or four of the worst”?

Heaton: I find that comedians either abhor L.A.–either for aesthetics or shallowness–or they move there after New York City exhausts them and then stretch out into a comfortable sunny, suburban life. I think Adam Carolla, who for some reason still lives there, rags on it a lot and seems to share my take.

HiT: Can you share some positive notes on L.A., or any sense that a city revival isn’t just science fiction but a real possibility down the short, or long, road?

Heaton: L.A. has some positive things going for it. One of my favorite museums, The Museum of Jurassic Technology, is located in Culver City. I don’t really have a problem with the people in L.A. (although I didn’t really get to meet many this time around). 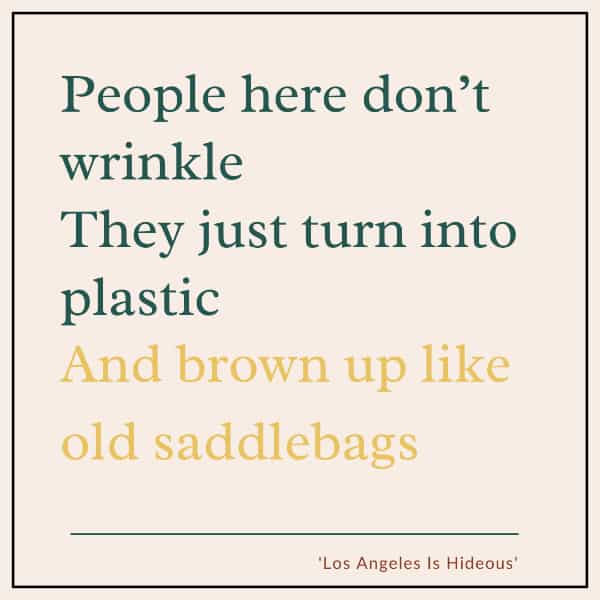 I will say, qua massive creative hub, Los Angeles is full of talented and artistic people, and so will always be a throbbing center of creativity and collaboration.

HiT: To my knowledge you’ve yet to be canceled, but you’re also someone who doesn’t pull punches with your humor. Just lucky … or is there a method to your professional survival others can emulate?

Heaton: I don’t think I’m apt to get canceled any time soon–I’m not a terribly edgy comedian. I abhor tribalism, which keeps me out of partisan bickering, and when I do political satire I always focus on ideas and policies over people and teams.

I think that insulates me a bit from the raging culture wars, because I’m not throwing mud in them. It’s also very helpful that most of my activity is now in podcasting (I’m the host of “The Political Orphanage”) rather than a social media presence. Not a lot of trolls and practitioners of Orwell’s Two Minutes Hate have the patience and depth to listen 20 minutes into a podcast to take something out of context.

HiT: You’re a podcaster, stand-up comedian, video host and author … what’s on your creative agenda for the second half of 2021?

Heaton: This book was really fun, but I’d like to do something more substantive, kind of a cross between P.J. O’Rourke and Jonathan Haidt. I’ve finished a manuscript tentatively called “Tribalism is Dumb,” and meeting with some potential agents and publishers. I’m also spinning off and launching a separate comedy podcast from my existing political one, called “Friday Release Valve,” which will be out in August.