The Colo.-based entrepreneur has been running the theater for the past 20 years. A critical part of her business model is keeping prices as low as possible.

How low? Try $8 to see up to three new releases at a time, with children under 12 are free.

“Thank you for keeping this alive. It’s the only place we can afford to go,” they tell her.

“I know we’re providing a service people want. It means as much to them as it means to me,” Kochevar says.

The theater’s longevity is capitalism in action … with a little help from Facebook.

A typical summer night at 88 Drive-In Theatre brings hordes of families to the theater’s gravel expanse. Children frolic a few yards in front of the movie screen, playing with balls purchased at the theater’s snack shop.

You might hear the sounds of summertime baseball, courtesy of the Colorado Rockies. Or movie goers could crank up the classic rock out of their car speakers.

The mood is light, festive. People mill about, visiting the snack bar where reasonably priced burgers, pretzels and other goodies await. It’s like a Denver Broncos tailgate party, but it happens all summer long. 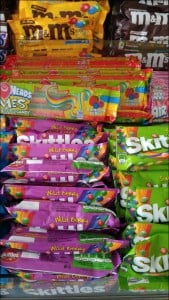 Once night falls, customers either watch the movies from inside their cars or from chairs set up in front of their back bumpers.

The 7-acre theater in Commerce City is just one of four such Colorado drive-ins listed with the United Drive-In Theater Owners Association (UDITOA).

A relatively new addition to the scene, the Denver Mart Drive In, also serves up a similar service to residents in Adams County, Colo.

Drive-In theaters were once a ubiquitous part of the American movie-going landscape. Now, their numbers are less than 400.

Kochevar’s parents bought the theater in 1976. At the time, the movie house showed X-rated movies. That didn’t sit well with some neighbors, especially since trees were sparse and an elementary school stood nearby, she notes.

Someone fire-bombed the structure, and Kochevar’s family bought it. That first season took plenty out of her family.

“We would work all night and pick up trash in the morning,” she says. “For a young person I learned a lot. I learned how to work hard.”

Kochevar grew up, studied to be a broadcast news anchor and later realized her true passion -- being a business operator. The family business, to be precise.

“I’ve been running it myself now for 20 years,” she says.

It hasn’t always been easy. Her drive-in can’t avoid what ails most outdoor theaters.

“Sneak ins still happen,” she says with a smile, like when a guy pulls up and he’s got a purse next to him on the passenger seat.

Many drive-in theaters folded in recent years due to the evolving film distribution process. Theaters were forced to embrace digital technology after decades of showing film prints.

Kochevar knew the change was coming and saved up accordingly. Digital projectors can set a drive-in owner back about $100,000, she says.

“We lost a lot of drive-ins and a lot of small town indoor [theaters],” she says. “it’s really sad because they’re such amazing little places.”

The new projectors require greater care to keep them cool. They also demand light bulbs that last for about 500-600 hours. She typically goes through two bulbs in a season.

“That’s been a huge expense,” she says.

“There’s been a lot of philosophy lost in terms of running the business, understanding how the industry works,” she says. “Movies were typically low-cost entertainment. Now, not so much.”

A couple going to the movies could easily run up a $50 bill just by buying tickets and concession stand snacks.

“That’s hurt the industry. I work hard to keep my prices extra low so people can come back every week,” she says.

Two years ago, the theater stared down a serious threat from the local government. She says city officials began blaming the drive-in for the crush of traffic surrounding the parcel.

“We’ve been here for 40 years, and nothing’s changed. But the city has grown around us,” she says.

Matters looked bleak. So Kochevar fought back with a simple social media strategy.

She posted one of the aforementioned letters on the drive-in’s Facebook page, along with a link to a petition supporting the business’s side of the debate.

“Twenty thousand of my customers signed it,” she says. The local City Council got the petition, but not before Kochevar could stage her own Hollywood moment.

“Who do you represent, the citizens or the police department?” she said at the time, as news cameras rolled. “You can’t blame the drive-in for this.”

It’s one reason she ran as a Republican for State House District 29 in Jefferson County two years ago. She’s running again this year.

“It’s not about right or left. It’s about small government versus large government,” she says. “I knew sooner or later I would have issues with some regulatory body. In the 20 years I’ve been doing this myself, regulations and taxation has skyrocketed, an exponential explosion.”

“Every industry has its own regulatory issues … it’s tough to have a united front, but we need to start pushing back,” she adds.

It helps that the United Drive-In Theatre Owners Association offers help when needed. In the past, drive-in theatre owners kept industry secrets to themselves. Not anymore.

The future for drive-in movies is far from certain, but Kochevar is doing all she can to preserve the tradition. One look at the 88 Drive In Theatre crowd and you’ll see the next generation of customers munching on candy and kicking up dirt with their busy sneakers.

“They can buy something every week and really enjoy the experience,” she says of the youngest patrons. “If you keep your prices low you make it up in volume, the Laffer curve. People are happier. That keeps my customers close.”