How about a painting created in the last 40 years? Much harder,isn’t it?

For me, it’d be Andrew Wyeth’s “The Carry,” painted in 2003. The painting depicts a confluence of rivers and was a metaphor for the two parts of Wyeth’s own soul. 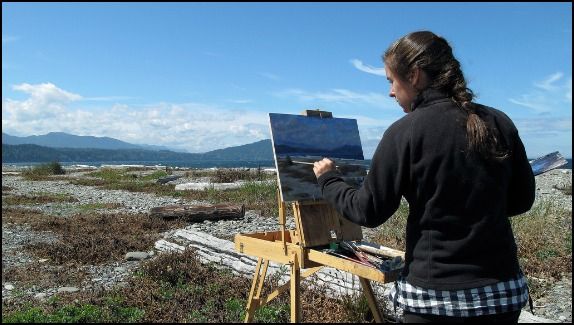 A painting has to go from the artist’s studio, to a gallery and then to an owner. It often ends up as part of collection before it eventually makes its way to your local museum.

Television is more immediate, putting the “mass” in mass media.

Sometimes decades pass between a painting’s creation and the time you eventually see it. The Vance Kirkland museum in Denver opened in 2015, some 34 years after the artist’s passing.

From Canvas to Your Eyes

A good painting can be intense, yet there’s a convoluted, torturous journey from the artist to your eyeball.

At its peak, the Crystal Palace in London, had around 2,000 visitors per day and just over 6 million people attended the exhibition during its run. More than 6 million people see the Mona Lisa at the Louvre each year.

Now, compare that to how television reaches us:

That’s a lot of eyeballs.

Television unarguably is at the peak of its artistic power. That’s while simultaneously reaching large audiences. Why? What’s behind the Golden Age of television?