These classic rivalries take a back seat to the battle between Ford and Ferrari in “The 24 Hour War.” After all, it wasn’t just bragging rights at stake.

Lives were routinely lost as these juggernauts faced off during the 20th century.

Adam Carolla’s documentary translates his car obsession into a captivating feature. It lacks a propulsive finale but passion and precision pour out of every frame.

The Ford-Ferrari feud didn’t begin blazing in the 1960s, even though the bulk of the film focuses on that decade. It started years earlier, tracking alongside the evolution of motor racing. World War II caused a temporary ceasefire, as the respective companies channeled their ingenuity for the front lines.

The film traces the Ford and Ferrari families, tapping surviving members and auto historians to pace the narrative. Team Carolla did its homework, given the quality sources on display. Not only do we watch an exhaustive array of archival footage, it seems like anyone still living from the ’60s got their interview closeup.

And they all have great tales to tell. 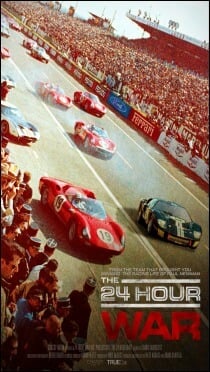 Carolla, working with co-director Nate Adams, squeezes terrific quotes from his interview subjects. You’d think a director with just one documentary under his belt might miss some juicy material.

“24 Hour War” doesn’t expand to include the culture at large or the political forces in play. That could have broadened the film’s appeal while adding texture. It’s still a bracing primer on capitalism.

The rivalry did more than fuel their respective egos. It showed how competition and market forces drove the companies to keep improving their product.

Enzo Ferrari, the company’s founder, initially cared only about the race track. “Selling cars for the road is the last thing he wants to do,” we’re told. If someone mentioned safety concerns they were quickly shown the exit.

That changed over time, although Ford’s dedication to the consumer proved more pragmatic.

Winning Le Mans or other signature races meant a serious marketing boost, and the rivals acted accordingly. Sales weren’t the only concern, though. Death haunted the sport, both then and now. Even spectators might lose their lives as a result.

Enzo Ferrari’s son recalls his father telling him not to get too attached to the company’s drivers. It’s no wonder “The 24 Hour War” invited consumer advocate Ralph Nader to weigh in.

The “24 Hour” in the title refers to signature car races like Le Mans, grueling events the rivals pursued at all costs. We see recaps of several Le Mans races, marveling at how much footage was saved for the historical record.

Both sides scored their victories, but the narrative doesn’t have a definitive moment or flourish. The end credits wave the checkered flag, and we’re left expecting something more dramatic.

HiT or Miss: “The 24 Hour War” isn’t just for car enthusiasts, though they’ll cheer the film’s fiery feud between these titans of the speedway.