Movie history will be made tonight … or an epic number of political speeches will push said history off the stage.

Last year, the ceremony spent three-plus hours apologizing for the perceived lack of diversity in the honorees.

This time around, we’re expecting a full-throated assault on President Donald Trump. Keep refreshing this page for updates throughout the night.

UPDATED: Here is the Hollywood in Toto Podcast recapping the Feb. 26 telecast.

12:17 a.m. And that’s a wrap. Kimmel handled himself quite well. Funny, solid improv and appeared totally at ease. Of course he played to the industry’s anti-Trump hysteria. Would have been run out of town had he did anything else.

The night proved less angry and political than expected. Good. The lectures were still there, as cloying as we feared. They weren’t necessary. But it all could have been worse.

Thank you for joining me for the live blog!

11:57 p.m.: Emma Stone, your new Best Actress winner: “A huge confluence of luck and opportunity,” she says of the honor. Yup. Hoping her fellow stars realize this the next time they double down on insulting large swaths of the audience.

11:53 p.m.: Casey Affleck on winning the Best Actor Oscar – “I wish I had something bigger and more meaningful to say.” And … nothing. Just hours before Affleck made an angry rant at the Spirit Awards. The Oscar moment took him away. Good.

11:44 p.m.: “I was lucky enough to fall in love while making it,” says new Oscar winner Damien Chazelle (“La La Land”). What a sweet note. And, by the way, for all the “La La Land” haters — this may be the sweetest, most old-fashioned movie romance in some times. Let’s put aside the snark and genuflect to that, please?

11:35 p.m.: Never mind what I just typed. Here’s “Moonlight” co-writer Barry Jenkins: “For the next four years we will not leave you alone, we will not forget you.” Phew. I thought we had to be good citizens and take care of our own lives.

11:32 p.m.: The main speeches haven’t been as political as expected. I think, deep down, the stars realize that their once-in-a-lifetime moment shouldn’t be marred by an of-the-moment rant. But I could be soon proven wrong.

11:30 p.m.: The whole Kimmel/Damon feud is the kind of inside joke humor that sails over 99 percent of the audience’s head. And for good reason.

11:22 p.m. Yup, this In Memoriam segment is downright brutal. What losses.

10:56 p.m.: Are they really paying tribute to “The Bridges of Madison County?” Yikes.

10:46 p.m.: Winner of documentary short film “The White Helmets” makes a plea for peace: Syrian war has raged for six years, he said. “Stand up and remind them we all care … so that this war can end as quickly as possible.” Wonder who was U.S. President for 99 percent of said war? #WheresTheOutrage

10:20 p.m.: This “tourists invade the Oscars” segment is taking plenty of time, but it’s killing it, too. Nice to see stars showcasing their charm without condescension.

10:11 p.m.: Gael Garcia Bernal: “As a Mexican … as a human being I’m against any sort of wall that tries to separate us,” he said, before introducing an animated film Oscar. Of course.

No one’s going after Trump. Like no one gives a shit about him & we’ve already forgotten him. This is what 2020 will be like. #Oscars

10 p.m.: Of course “A Salesman” wins. The film’s director, Asghar Farhadi, didn’t attend due to his protest of President Trump’s immigration pause. So his words were spoken by a representative. He blasted the “inhumane” Trump policies. “Dividing the world into the “us” and “our enemies” categories created fear,” he wrote. You know who also creates fear? The tyrannical Iranian regime. Care to lob a syllable against them? Didn’t think so.

9:53 p.m.: Quick observation: Speeches aren’t very political so far (good). Kimmel is even more political than expected. Yet Kimmel is also very strong so far — quick-witted, incisive and able to cut Hollywood hubris down to size.

9:50 p.m.: A heartfelt speech by Viola Davis (winner, Best Supporting Actress). She got choked up, thanked all the right people and didn’t make an inappropriate political rant.

One weird comment: “We are the only profession to celebrate what it means to live a life..”.

Also curious: She gives shout out to “August” and “God” – no applause follows. Does the crowd know she meant playwright August Wilson? More likely, pairing August with faith meant they couldn’t applaud that line? 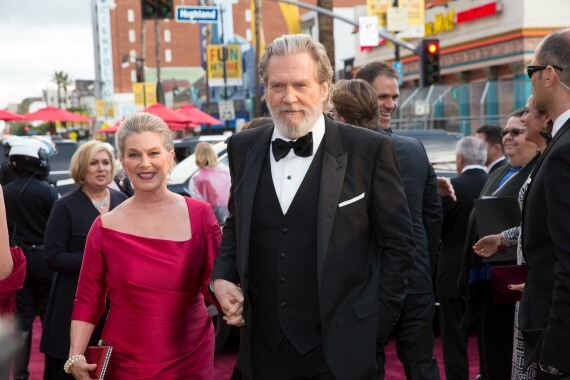 9:32 p.m.: The very least the telecast can do is give us Jack. #NicholsonNow

9:25 p.m: Isaacs: “Tonight art does not belong to a single faith … it transcends all these things.” More diversity blather from an industry which robs conservatives from their livelihood.

9:23 p.m.: Yet another Trump slam from Kimmel: “Here’s something rare … a president who believes in both arts and sciences,” as he introduces Academy President Cheryl Boone Isaacs. It’s like Stephen Colbert is pulling his strings.

8:59 pm: Guy thanks his dead wife and the music plays him off. Who says the Oscars can’t be funny?

8:56 p.m.: So far every other Kimmel line is directly from the left. Riffing on Fake News, for example, while news organizations keep smugly cranking out false stories while puffing out their chests. Maybe Jimmy could riff on that?

“My grandma would want me to button up,” he said, motioning to his suit.

He proceeded to thank his teachers, his “Moonlight” co-stars and co-workers and, most of all, his wife who just delivered their second child.

“Peace and blessings,” he said. No speeches, just gratitude. Perfect.

8:44 p.m.: That sense of wonder didn’t last long. Host Jimmy Kimmel trotted out a lame anti-Trump line — “225 countries that now hate us.” Then he made what seemed to be a genuine plea for unity, the kind where we turn to people with whom we disagree and spark a dialogue.

Then he called Trump a racist.

“Remember last year when it seemed like the Oscars were racist. It’s gone now thanks to him.”

More Trump slams followed, like him saying he’ll Tweet about the Oscars while taking a 5 a.m. bowel movement.

8:36 p.m.: Hey, where’s Jimmy Kimmel? Justin Timberlake kicks the night off doing what Hollywood used to do best — entertain. His buoyant, two song set set the theater rocking. Could this night truly be about … bringing joy?