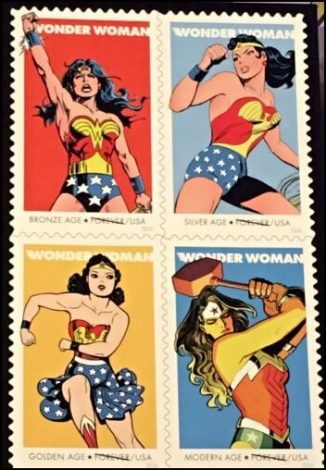 for Paradise City Comic Con, postmasters from Fort Lauderdale and Miami showcased the new stamp in a brief ceremony.

The brainchild of William Moulton Marston, Wonder Woman debuted in 1941’s All Star Comics #8. She stood in stark contrast to the male heroes of the time, like Superman, Batman and Captain America.

This was no damsel in distress. Wonder Woman was a strong, courageous woman ready to fight a war.

Roy Thomas, who received his first Wonder Woman comic when he was 5 years old, was given the plum assignment to write for the character in the 1980s. He noted that it wasn’t until around that time that a woman – his wife – received a writing credit in comics.

“It’s been an honor to have been associated with a character like Wonder Woman,” Thomas said.

Even Marston’s wife, Elizabeth Holloway Marston, contributed to the iconic character without getting proper credit.

When legendary artist Neal Adams started working on comics, only 5 percent of the readers were women. He credited the industry Friday for creating an environment that was inviting for women.