As the resident Conservative Who Doesn’t Care About Left-Wing Overtones In Movies And Doesn’t Think You Should, Either, I’m here to say “Wonder Woman 1984” is, hold your breath… just fine.

You’d be wasting your energy, though.

I watched it about 13 seconds after it went live on HBO Max with my three teenaged sons on Christmas Day and they loved it. This may not seem like much, but my eldest boy is a committed leftist who likes to spike the ball in my face every time a conservative icon gets lampooned in mainstream media.

There was no ball-spiking during the entirety of the (admittedly bloated) 150-plus minute running time.

My middle son is gay and spent most of his time declaring every scene in which Kristen Wiig’s Cheetah appeared as “iconic,” and my youngest is an avid NFL and NBA buff who couldn’t care less about Wonder Woman, but he dug this movie.

In the interests of full disclosure; we are a committed Marvel family and have seen all 23 MCU films in the theater on opening night. Sometimes before opening night. They’re as much a part of our familial bond as birthday parties and Christmas mornings.

The DC flicks… not so much.

Which is all to say; Wonder Woman isn’t as important to us as, say, Iron Man. Watching it in the comfort of my living room and not shelling out $100 at the theater also likely colors my view, but here we are.

As superhero sequels go, it’s … just fine. The overstuffed CGI mayhem is lifted above overkill mediocrity by a couple of great action sequences. The chemistry between stars Gal Gadot and Chris Pine (forced though their reunion may be by the most comic book-y of contrivances) remains solid. The surprising emotional heft as one character says goodbye for what has to be forever also landed.

It’s all very comic book hodge-podgey. But it’s a Wonder Woman movie so I’m not looking for detailed historical authenticity.

And herein lies the rub; if you’re going to get mad at something, it’s probably Pascal as Lord. There is no doubt the filmmakers thought they were really giving it to us darn conservatives by giving the villain a ridiculous hairstyle and backstory as a failed businessman and huckster.

So, if you want to be mad at that, have at it. The thing is, as Super Villain-y as Lord behaves, he ends up being the most sympathetic character in the movie. So, great job, liberal elites! You made me like President Trump more!

RELATED: Reporters Rush to Defend Wonder Woman from Itself

There’s also a cartoonish Ronald Reagan analog who gets a wish and uses it on more nukes to point at our enemies instead of, say, world peace or ending hunger. I suppose you could be mad at that. But we wouldn’t have blinked twice at a plot point like this in any movie made between the Washington and Bush administrations.

But in the social media age, everybody’s gotta be mad at something. So there it is if you want it. However, unplugging your MAGA Goggles for a few hours will greatly enhance your enjoyment of this movie.

Put it this way; if you followed my recommendation and read “Wanderers,” a fantastic sci-fi novel written by Chuck Wendig, probably the most virulent, nuclear anti-Trumper SJW on earth, you’ll enjoy “WW84” with ease.

A lot of the action, even if the CGI isn’t 100 percent, which seems strange for a $200 million movie that’s been in the can for six months during the pandemic.

A lot of care (and cash) went into nailing the era. The fashion, the music, the mall. As a 50-year-old who spent his 20s-40s wearing a fanny pack and absorbing countless slings and arrows, it was a personally triumphant moment to watch Pine kick unholy butt while wearing one. 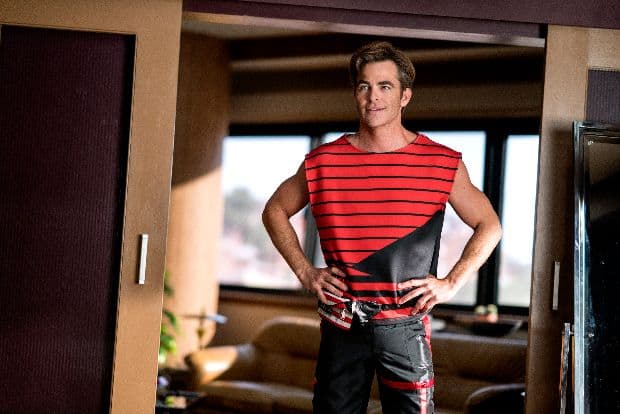 Gadot is a capital “M” Movie Star; every second she’s on screen “WW84” is better. Now we need to see her in something other than a mega-budget franchise film to prove her bona fides. “Marriage Story 2”? Maybe with Oscar Isaac to continue the Comic Book-to-Star Wars Pipeline?

Wiig is not exactly a revelation as Barbra Minerva, the nerdy scientist who turns into a sexy super-villain, but she’s not comically out of her depth in such a huge production. Her arc is basically, “She’s All That With Claws.”

She looks great in the Olivia Newton-John leotard sequence, which should have been longer.

Pascal, whose Maxwell Lord rides a whiplash-inducing emotional rollercoaster, brings some real pathos to what could have been a one-note role. (He’s also great as “The Mandalorian,” but that’s another article.)

And Pine acts with the reckless abandon of Harrison Ford in “The Force Awakens,” knowing it’s almost assuredly his last time playing the role. (Or is it?)

The Invisible Plane bit is just silly and should have remained on the cutting room floor, which brings me to…
“WW84” is easily 20, probably 40, minutes too long. It also suffers from Too Many Villains Syndrome; Lord or Cheetah would have been enough for one movie.

The Wishing Stone is kind of dumb. But if you’re a Silver Age comic book guy as I am, you know DC has always been kind of dumb. Marvel characters have “reality-based” origins (radioactive spiders, Gamma Rays, suits of armor) while DC is more… not that (refugee from a dying planet, green space ring seeks out brave man, dude has wings).

Is “Wonder Woman 84” a great movie? Not by a long shot. Is it a good movie? Maybe. But it’s definitely okay, and, as DC movies go, “okay” is high praise.

Terry O’Brien lives in Cape May, NJ and writes The Undertow for Exit Zero Magazine.