Before the season was half over, the phrase was everywhere. “True Detective” and the term “hate watching” became connected in the same gleefully nasty way “Nuke the Fridge” and “Jump the Shark,” sum up any creative derailment.

Great, another invented term to sum up fan boy disappointment. Apparently, we needed another one.

Then came the funny street posters by comedian Jason Saenz featuring series stars Colin Farrell and Vince Vaughn. The signs read, “Lost: Interest. If you have any idea as to WTF is happening this season, please call…”

I took my time catching up with “True Detective’s” second season, but only because I don’t have HBO. The first season is some of the best television I’ve ever had the pleasure of experiencing. Everything about the Cary Fukunaga directed, Nic Pizzolatto-scripted 2014 series was an artistic home run. It created a new milestone in character-driven, episodic crime TV. 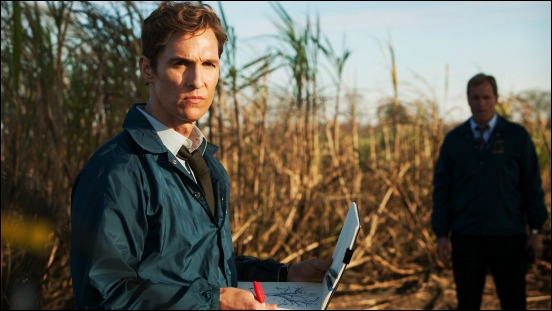 In a genre that includes such highs as “Dragnet,” “NYPD Blue,” “The Wire,” “The Shield” and “CSI,” “True Detective” was brilliant. A second season, with a new cast, director(s) and story, promised great things. It also represented an impossibly tall order.

Reports that Fukunaga was off making “Beasts of No Nation” while Pizzolatto was running the show brought back memories of how David Lynch left “Twin Peaks'” hit and miss second season to make “Wild At Heart.” By the time 2015 ended, the return of “True Detective” was singled out by critics as a low point, not just for the series but TV overall that year.

Let’s start at the top. The opening credits, set to Leonard Cohen’s hypnotic “Nevermind,” are among the best in television history.

Surrealism has always been a welcome quality in TV show opening title credit sequences. Other noteworthy examples include the ’80s version of “The Twilight Zone” and Stephen King’s “Kingdom Hospital.”

Here, it sets a meaningful tone that each episode follows dutifully. Cohen’s lyrics and the striking, downright awesome visuals indicate the moral turbulence ahead.

To briefly recap: Colin Farrell stars as Ray Velcoro, a troubled detective with a tragic back story. His struggle to be a good father is undermined by his self destructive life choices. There’s also Rachel McAdams’ fierce law enforcer, Ani Bezzerides and Taylor Kitsch’s scandal-plagued Paul Woodrugh. These three join forces to investigate a murder by acid and discover how it ties into Frank (Vince Vaughn), a corrupt deal maker who shares an odd friendship with Ray.

The plotting is dense and pokey from the pilot on, but it’s never incoherent. If season one often resembled (minus the racial tension) “In the Heat of the Night,” then the obvious inspiration for season two is “Chinatown.”

The expansive probing into the corrupt business world of Vinci, Calif. creates a wide scope, both visually and tonally. What the show needed (and season one had plenty of) was a sense of humor.

Other comparisons are equally unfavorable.

Kelly Reilly’s striking performance as Vaughn’s wife is never the equivalent of Michelle Monaghan’s amazing work in season one. Pizzolatto’s dialog, on the other hand, is different in favorable ways. Gone are the existential musings of the first season. In its place is profane, sometimes crude wordplay that possesses a pulp novel snap.

While it can’t measure up to the adventures of detectives Rust Cohle and Marty Hart, season 2’s rewards are still plentiful. It’s consistently beautiful and intermittently brilliant. You can’t say that about most television shows.

McAdams is sensational in “True Detective.” She’s never been this good before, not even when she’s worked for Woody Allen, Wim Wenders, Terrence Malick and Brian De Palma. Her Oscar-nominated turn in “Spotlight” is meek and uninteresting in comparison.

Farrell’s role inadvertently addresses some of his own past demons and ranks high with his most rewarding risks as an actor. Vaughn is mostly riveting playing a man whose presence beings instant danger to any scenario.

While miscast, Vaughn overcomes it by abandoning his motor-mouth shtick and returning to the kind of disciplined dramatic acting that marked his early career. Yet, there are times when he can’t match the level of the writing. Kitsch’s plotline is the least interesting, though it’s also the actor’s fault. The camera loves him but Kitsch never connects to the character.

Season two of “True Detective” not only requires multiple viewings but shows some programs truly need to be binge-watched.

Like the first season, this is meant to be absorbed as an extended movie, not merely a series you visit on a weekly basis. Had this been released on Netflix or in theaters as a 5-hour movie, it might have been seen as the challenging but consistently engrossing tale that it is.

Taken in one-hour weekly blocks, the widespread frustration was understandable, if undeserved.

I can’t claim I understood everything that took place. Weeks later, the four diamonds still mystify me.

If season one was a four star milestone for television, then this is the three star follow up. While imperfect (the poetic season finale was still the weakest episode) everything you’ve read about it is wrong.