Enter “The Voluntaryists,” comic crusaders with more on their minds than pow! bam! and boom!

“Voluntaryists” creator Jamie Sherman began the series while trudging through his legal studies in school. Consider Voluntaryism libertarian ideals on steroids, a direct critique of the current political structure. You may not agree with its principles, but Sherman is able to spread his views via the crowdfunding revolution.

HiT reached out to Sherman to learn more about the comic book and whether he thinks pop culture can impact the masses. 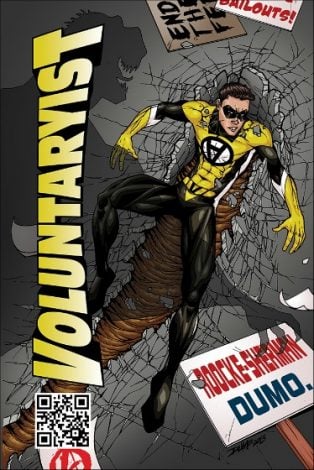 HiT: Can you discuss your philosophy between thought-provoking content and a pen and ink soap box? Is that balance a concern?

I do not have to make a philosophical appeal to the audience – I simply write the narrative and tell the story as the characters emerge and their personalities develop. I think that is often how entertainment implements “worldview,” so I saw no need to change the mode for my own project.

HiT: The issue of government spying can make strange bedfellows, ideologically speaking. Have you found readers across the political spectrum? What are some of the most common reactions to your work?

Sherman: I think I have a diverse group of readers, but I would say that they mostly fall into the small “l” libertarian spectrum currently. People who tend to not trust the government with invasive surveillance appear to also be skeptical of government intervention in other areas. It’s hard to be scrutinizing of the government’s actions behind closed doors in one arena but not in others.

HiT: In 2016 we generally trust the government less than before. How much sway has pop culture had on that shift?

Sherman: I don’t know what “we” means as I am not into using collectivist pronouns. However, I would agree with you that there has been a large-scale increase in scrutiny of government actions due to whistleblower revelations. This can be seen in U.S.-surveyed approval ratings on congressional activities. I think that this sentiment can be felt even more strongly across the globe where citizens of other countries are looking at the revelations about U.S. spying and warfare and are wondering themselves what their government is doing behind closed doors.

HiT: What are your thoughts on movies and TV shows today that pack a message? Are they truly influencing us? Any effective examples that jump out to you?

Sherman: I do not think that there are movies or TV shows that pack philosophically significant messages these days. Part of the reason I created Voluntaryist is because of how few lines of thought are permitted in mainstream entertainment. Most TV shows that involve a discussion of government are either supportive in their display of a department (FBI, CIA, DHS, NYPD, Chicago PD etc.) or are critical of other governments except for the United States’. The closest critiqued permitted is one where a “bad apple” is discovered and eventually ousted and brought to “justice.” There is never a discourse as to whether government itself is inherently unethical or even, on a smaller scale, if a department or division is inherently evil. At the end of every episode, The U.S. government is the lord and savior through the “heroic” actions of public officers or secret agents.

HiT: Are there current movies or TV shows that have a strong libertarian streak, in your opinion?

I do not watch enough current TV to know exhaustively, but I would be willing to say that any TV show in mainstream broadcasting will avoid a true critique of government that could be considered firmly libertarian. The most genuine critique I’ve seen in recent years has come from “House of Cards” which, fittingly, is a production of an Internet streaming video service, not cable or broadcast. “House of Cards” unabashedly portrays politicians as self-interested narcissists who will do anything for power. I find that to be a classic libertarian critique of political economy incentives. 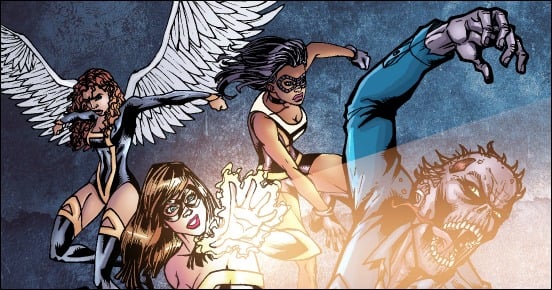 HiT: You’ve pursued crowdfunding to help support the project. What have you learned about the process that other artists should know?

Crowdfunding is probably the best thing to happen to the economy since the Internet. Crowdfunding allows people to bypass traditional barriers to entry and get seed capital for a host of projects and innovations that would otherwise never see the light of day because of disinterested venture firms. Now, anyone with an idea can market their project direct-to-consumer and give people the power to choose what they want to bring to fruition.

If it wasn’t for crowdfunding, I wouldn’t have been able to bring the comic series to life. Those who wanted to expand the philosophy of liberty into the comic world gave me the chance to make it happen, and I am forever grateful.

Other artists/producers who wish to crowdfund should know it takes a lot of work. You will spend hundreds of hours direct messaging potential supporters, designing your brand and making a pitch online. It takes dedication that may have to continue for several campaigns before the project finally clicks and starts to build momentum.

Make sure that, no matter what, you have prototyped your project so you can explain the details in your campaign. Supporters generally want to see some work product so that they know what they are getting behind is legitimate. Don’t think that an idea popping in your head and written down into a campaign alone will get you the needed support (unless it is an intentional joke like the Kickstarter potato salad campaign.)

HiT: Can you give us a preview of future “Voluntaryist” installments?

The next story will be the sequel to “Saving Snowden, Shielding Assange: The Voluntaryists vs. the NSA 2.” The Voluntaryists are tasked with getting Snowden to Ecuador so he may meet Julian Assange in the safety of asylum. Snowden and Assange are planning to work together to increase the leaks made public in hopes of foiling the U.S. government’s plans for total enslavement of humanity. However, the U.S. government has other plans to disrupt this meeting.

Editor’s Note: HollywoodInToto.com does not endorse Voluntaryism but believes in the open exchange of ideas and conversation.