Two college students, AJ and Keith, (Robert Rusler and Chris Makepeace), partake in a late-night mission in “Vamp” — find a stripper in order to be indoctrinated into a bizarre fraternity.

The duo convinces Duncan, a wealthy but friendless nerd (Gedde Watanabe) to loan them his wheels (and his unwelcome company) to drive into Los Angeles and search for exotic dancers late into the night. The three discover The After Dark Club, where the MC (Sandy Baron) is a creepy Vaudeville-like hack, the food (namely a bowl full of cockroaches) is disgusting and the women are gorgeous.

Namely, the hypnotically seductive Katrina (Grace Jones, naturally), who the club understandably treats like royalty. Of course, there’s something off about the club and Katrina herself…

Richard Wenk’s 1986 film shouldn’t be as good as it is but manages to overcome the subdued expectations genre fans sometimes bring to the movies they love. Yes, this is a horror/comedy about stripper vampires, and it is from New World Pictures, which Roger Corman himself founded.

Yet, the film has a snarky sense of humor, is beautifully shot, and stylishly lit, has some jolting make-up effects, and injects the template of Martin Scorsese’s “After Hours” (1985) with a juvenile supernatural angle that actually works.

Not everything here connects, like a subplot involving Billy Drago as a vampire gang leader, which seems like a forgotten plot line from an earlier draft that should have been tossed. 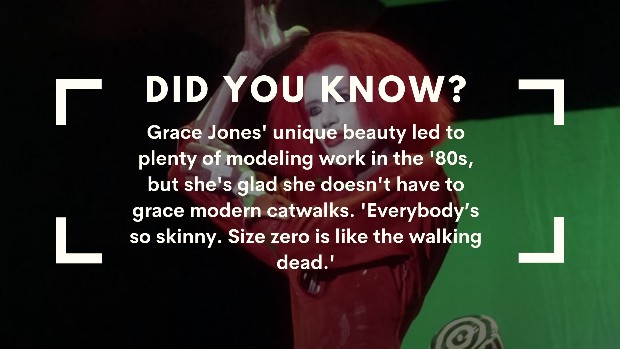 The one-liners and sitcom-y delivery show their age, though Makepeace and Rusler manage to remain likable for the entire film, which is harder than it sounds (after all, they’re playing spoiled, handsome and insufferably naïve frat boy brats).

Watanabe was far less irritating in “Sixteen Candles,” which isn’t a compliment.

On the other hand, veteran character actress DeDee Pfeiffer, playing an After Dark hostess with a crush on Makepeace’s shy college boy, is wonderful. She brings a surprising sweetness and quirky humor to her role.

Then there’s Jones, who enters the film giving what was likely written to be a strip tease on stage but looks like the wild performance art that it is. Dancing to one of her own tunes, in a red wig and a dress just as scarlet, her body and chair prop covered in Keith Haring art, Jones grabs this movie by the throat and never lets go.

Perhaps it would have been nice if her character had more scenes and any dialog (we hear her trademark laugh but Jones has no lines).

Still, Jones is spectacular in this, a rare film role that taps into her unclassifiable image as a pop icon, singer, actress and living work of art. Katrina is every bit as knowingly sensational and empowered as Jones, which is why the role is such an ideal fit.

Nearly every scene from the second half onward is illuminated with green and pink lighting, a dreamlike touch that oddly makes the deserted cityscapes look less like sets and more like the sleazier section of the world inhabited by Warren Beatty’s “Dick Tracy” (1990).

RELATED: How ‘Terror in the Aisles’ Nails that ’80s Horror Spirit

Depending on your tolerance for this sort of slick nonsense, this will either be a deluxe guilty pleasure or literally play like the kind of B-movie that would eventually inspire “From Dusk Till Dawn” (1996) some twenty years later.

However you look at it, “Vamp” has an edge to it – while lacking the old school elegance of “Fright Night” (1985) and the full throttle MTV kick of “The Lost Boys” (1987), it’s disreputable enough to be undermined as trashy but polished enough in its depiction of privileged boys searching for the forbidden fruit in “exotic” locations that are like tourist destinations for them.

I wish the final scenes were stronger and that this were wittier overall. Nevertheless, not only is “Vamp” a worthy ’80s genre title worthy of rediscovery, it was clearly an opportunity for Jones to showcase her avant garde talents and sense of style in a most unlikely vehicle.

The movie is enjoyable on a number of levels but it’s Grace Jones who gives “Vamp” its unruly bite.