Jussie Smollett appears guilty of fabricating one of the most notorious hate crime hoaxes in memory.

The co-star of Fox’s “Empire” claimed two Trump supporters physically attacked him. He added they doused him with bleach, shouted anti-black and anti-gay rhetoric and talked of “MAGA country,” a reference to President Donald Trump’s Make America Great Again slogan.

Only Twitter decided some light mockery of the disgraced star called for a 12-hour punishment.

Joseph Granda, a Colo.-based artist and filmmaker, Tweeted the following message Tuesday from his @americancheesus account:

Time for Jussie Smollett to learn to code.

The latter three words is what some Twitter users have said to journalists fearing they may lose, or already lost, their jobs. TheWrap.com’s Jon Levine shared the news via his own Twitter feed:

The “learn to code” meme is a riff on stories written about coal miners during the Obama era. Some journalists suggested the newly unemployed miners “learn to code” as a career transition.

Many saw the suggestion as arrogant, condescending or both.

So, when a gaggle of journalists got laid off last month, some snarky Twitter users returned fire. And, just as swiftly, some found themselves banned.

It appears Granda, who provides the intro voice over to The Hollywood in Toto Podcast, ran into a similar Twitter censor. 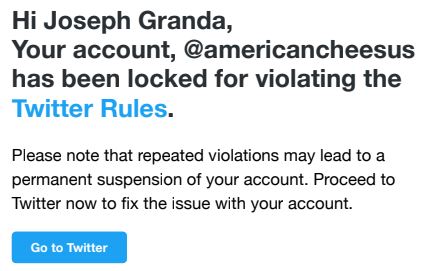 Granda later received a note saying he could return to Twitter if he agreed to remove the “offending” Tweet. 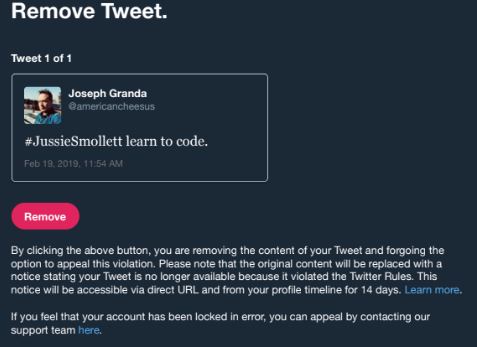