“That was a good month run,” Di Domenico says of his reaction to the first of many Trump gaffes.

Instead, the Trump Train kept on rolling.

And the Trump impersonator doesn’t think he’ll stop even if “The Apprentice” star loses to Hillary Clinton come November. For now, the comic actor’s calendar is nearly as full as the man he famously imitates. 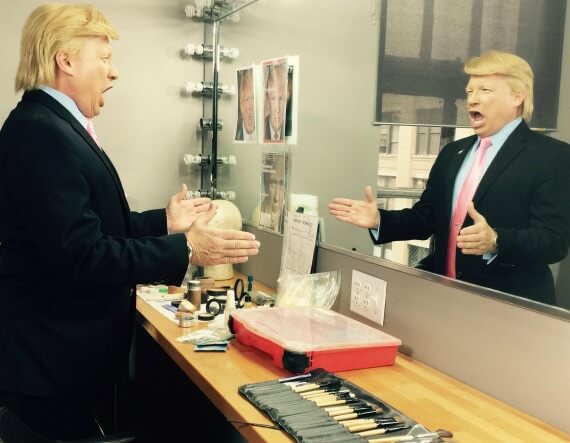 Di Domenico says he became fascinated by Trump long before the real estate mogul set his sights on the presidency. He remembers grabbing a copy of “Trump: The Art of the Deal

“He has this uncanny ability to stay in the present,” the actor says.

“There’s a masculinity to him … that people haven’t seen, ever,” he says. “There’s a primal attraction to what he’s doing … I’ve had women say to me, ‘he’s so masculine.’”

“You have to have the desire to play around with it,” he says. “I practice his voice every day. His voice is getting a little more gravelly, so I update it.”

How Do You Get to Carnegie Hall?

Impersonation takes practice, but it’s a combination of innate skills and hard work that makes his Trump pop, he adds.

Prior to Trump’s run, Di Domenico worked steadily as a comic actor for hire. Movies. TV shows. Corporate events. He considered himself lucky to play make believe for a living.

When Trump flirted with a presidential run during the 2012 campaign, he thought that might mean a rush of new gigs. Nothing doing.

So when Trump announced his 2016 campaign he was skeptical.

“I was inundated with messages from friends on Facebook. ‘Dude, you’re set, man!’ I immediately said, ‘hold on, we’ve been through this before.’ I need to make sure this is really going to happen.”

It’s Not Over Yet

He thought the McCain imbroglio would mean a return to his normal work slate. Then, he figured if Trump could handle the first debate this might be a long-term situation.

Once Trump survived going head to head with the competition, the actor’s schedule got very full, very fast.

Being a Trump impersonator requires more than repeating a few catch phrases. The task demands a physical makeover from head to toe.

Di Domenico takes up to 15 minutes to apply his Trump ‘do, a custom built wig created by the folks who do makeup for Cirque Du Soleil.

“If you’re standing right next to me, it looks real,” says Di Domenico, who keeps his head shaved to make affixing the wig to his head easier. He applies two different bases on his face.

“I have a heavy beard. Trump doesn’t,” he explains.

A sprinkling of crow’s feet comes next, along with frown lines above the eyebrows and some nose contouring.

Top it off with a suit and power red tie, and he’s ready to get yuge laughs as Trump.

Di Domenico says playing Trump nonstop has made him a better performer.

“I’ve never had the ability to toot my own horn. It’s not in the fiber of who I am. Playing him for so long has made me more confident,” he says.

“When a comedian works a club you have to own the stage. If not, the audience eats you alive,” he says. “With him, I don’t care if people are clapping or booing … I’ve already done a fantastic job. I’m putting myself in his place.”

Di Domenico understands what a Trump victory in November could mean to his professional life. He’s not worried about the results, though.

“If it ended tomorrow, or if he doesn’t win the election, he’s not going anywhere,” he says.