Some conservative outlets pummeled Time’s Up in the wake of its latest, most egregious scandal.

The reality and we all knew it, was that Time’s Up was a partisan organization designed to push leftism and destroy conservatives, Republicans, and Christians by way of accusations of sexual misconduct.

This followed news that a large group of Time’s Up board members, including producer Shonda Rhimes, Eva Longoria and Natalie Portman, resigned earlier this month.

We learned the group’s key leaders helped Gov. Andrew Cuomo battle allegations of sexually inappropriate behavior. That included the Democrat’s attempt to discredit one of the women accusing him of noxious behavior.

The right-leaning Spectator noted how Time’s Up amounted to a progressive SuperPAC with little interest in its core mission  – defending women from sexual predators.

Putting celebrities on the board instead of activists who are actually qualified for the role assures donations from their wealthy Hollywood friends. Cultivating relationships with slimy politicians guarantees that leadership receives high-profile jobs in government despite little experience and few accomplishments. The celebrities, meanwhile, use these nonprofit board positions as résumé builders, ways to appear woke without having to do any real work.

Now, compare that harsh but fair analysis to one written by Sharon Waxman, a veteran Hollywood reporter who oversees the powerful entertainment news site TheWrap.com.

Waxman’s op-ed, behind a paywall, defends the celebrities who joined the group’s board only to later resign. As Waxman sees it, they were too busy with their day gigs to actually affect change.

[Producer Shonda] Rhimes has a pretty busy day job writing hit TV shows like “Bridgerton” that deeply impact the culture…. Eva Longoria is pursuing her new path as a director.

The only time Waxman flashes anger about the situation is when she notes how some conservatives have greeted the group’s downfall. She sneers that conservatives mocked the group in her social media feed.

“Expect more of that,” she added, as if they were the true villains in this sad saga, not the group leaders who squeezed millions out of people who believed in the cause.

RELATED: Hollywood’s Time’s Up Scandal Is Just the Beginning

Next, the columnist suggests Gov. Cuomo tricked the group’s leaders into helping him out, as if these were poor, defenseless women who couldn’t juggle their prime directive and the need for new legislation to stop the next Weinstein.

Pathetic, and the furthest thing from empowering.

The secondary scandal here is how the media tip-toed around the various Time’s Up imbroglios, failed to connect the critical dots until it was too late, all the while protecting celebrities from any fallout. 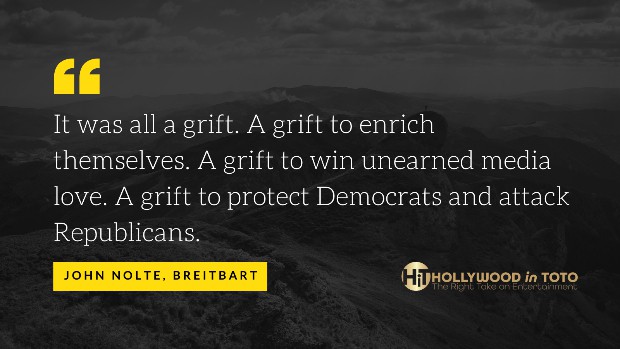 How many reporters reached out to Longoria, Portman and others for comment on the scandalized groups? Did we see any passionate op-eds demanding they act, and quickly, before the group’s noble mission collapsed?

This reporter asked those stars for comment (with no responses). Did TheWrap.com do its due diligence, especially given its reasonably large editorial staff and deep Hollywood connections?

More importantly, why should the group’s apparent collapse shock anyone?

Breitbart News collected the previous Times’s Up scandals, which generated modest coverage in mainstream media circles. The same proved true of entertainment news outlets, which either gave the incidents short shrift or ignored them entirely.

None of this should have happened. Time’s Up could have leveraged its Hollywood connections, and sizable cash flow, to make a difference for female survivors of sexual abuse. Instead, its lust for power, political connections and fealty to the Democratic party leave it reeling, if not already dead.

A healthy, curious media might have prevented all of the above. Reporters who hold stars accountable for their “activism” might ensure they do more than virtue signal. Groups hounded by skeptical reporters tend to run a tighter ship lest their secrets spill for all to see.

Women deserve far better than what Time’s Up offered. That should be the universal takeaway from this debacle.